Spa 24 Hours: Sainteloc Audi bounces back from a lap down to win 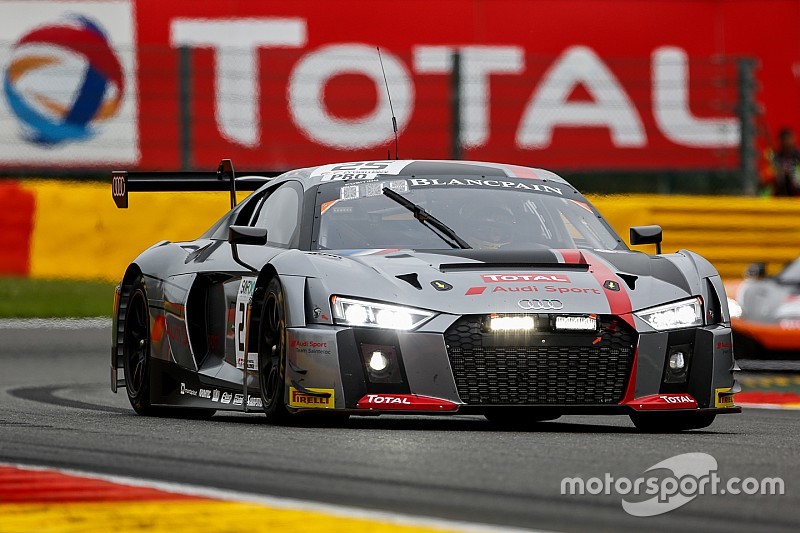 Sainteloc Racing, which was running as a factory-backed team for the first time, scored an 11-second victory over the M-Sport Bentley of Maxime Soulet, Andy Soucek and Vincent Abril at the end of the double-points Endurance Cup round of the Blancpain GT Series.

Sainteloc's R8 LMS had to come back from more than a lap down after losing time during the night with a mis-threaded wheel, which brought Gounon straight back into the pits after one slow lap.

It emerged as a true contender on Sunday morning and then as the favourite for race honours when it became clear that the Auto Sport Promotion Mercedes-AMG GT3 that had led much of the second half of the race would fall foul of strict rules on maximum stint length.

Haase, who added a first Spa victory to his two in the Nurburgring 24 Hours, said: "I can't believe I've just won the Spa 24 Hours – it is incredible.

"We lost two laps in the night and came back. I'm done, but that's the emotion of Spa."

The #8 Bentley Continental GT3 was another car to fall off the lead lap during the night, but came back into contention on Sunday morning.

Soulet took over second position at the final round of pitstops when Raffaele Marciello, who shared the best of ASP's fleet of Mercs with Edoardo Mortara and Michael Meadows, had to be held ensure that he did not exceed the 65-minute maximum stint length on the run to the chequered flag.

That dropped the Merc behind the Bentley, which it trailed to the chequered flag by 40s.

The Team 75 Bernhard Porsche had to fight back from a three-minute stop-go penalty early in the race to seal the position.

The two factory WRT Audis took fifth and sixth positions as the last cars classified on the lead lap.

The #1 car shared by Rene Rast, Nico Muller and Antonio Garcia was another car that had to be held in the pits to avoid infringing the drive-time maximum, which dropped it behind the sister car of Christopher Mies, Connor De Phillippi and Frederic Vervisch.

BMW, which was seeking a third consecutive victory in the Spa 24 Hours, finished 10th with the factory Rowe M6 GT3 shared by Bruno Spengler, Nicky Catsburg and Tom Blomqvist.

A car that had car briefly led the race on Sunday fell out of contention with a damper problem in the 20th hour and ended up four laps in arrears of the winner.

The AF Corse-run Kaspersky Ferrari and the full-factory Grasser Lamborghini that had exchanged the lead for much of the first half of the race ended their respective races in the barriers.

The Ferrari 488 GT3 shared by Giancarlo Fisichella, James Calado and Marco Cioci went off at Eau Rouge after the last named tangled with Marciello at La Source and sustained suspension damage.  The Lamborghini Huracan GT3 of Mirko Bortolotti, Andreas Caldarelli and Christian Englehart went off at Fagnes with a braking issue.