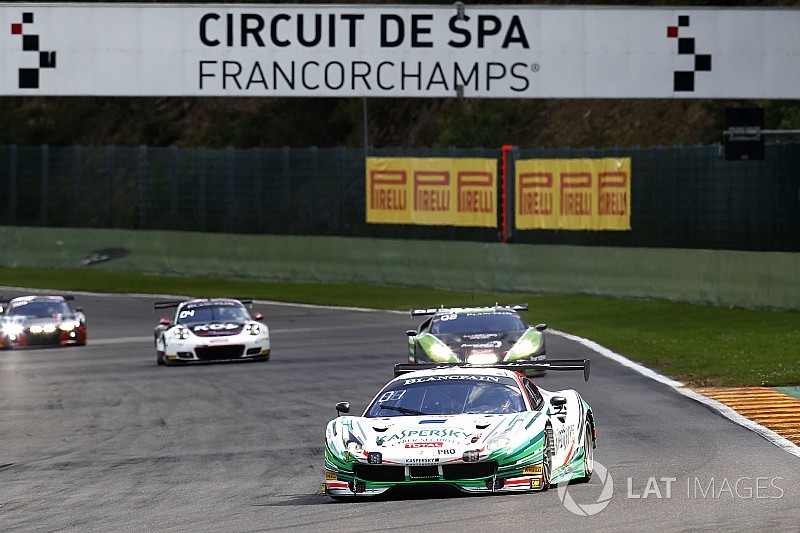 The AF Corse-run Kaspersky Ferrari 488 GT3 moved back to the front of the blue-riband Endurance Cup round of the Blancpain GT Series as the six-hour mark approached.

Cioci held a 10-second advantage over Christian Engelhart in the factory Grasser Lamborghini Huracan GT3 in a car that had led the race for much of the way.

Fisichella had converted pole position into the lead of the race and then led to the first round of pitstops. Team-mate Calado was then able to build up a lead of more than 20s over Andrea Caldarelli in the Lambo during the fourth hour, although a subsequent safety car removed that advantage.

Behind the Lamborghini, which had been qualified second by Mirko Bortolotti, Jimmy Eriksson held third place in the for the HTP Motorsport Mercedes team. He was just under four seconds behind the Lambo in the car he shares with Maximilian Buhk and Frank Perera.

Fourth place was held by the best of the fleet of WRT Audis with Connor de Phillippi at the wheel.

The race was interrupted by a series of caution periods, the first of which was triggered by a monster crash for the #50 AF Corse Ferrari 488 GT3.

Thai driver Pasin Lathouras crashed heavily at Eau Rouge late in the second hour, but was able to walk from the wreck and was then given the all-clear at the circuit medical centre.

Spa 24 Hours: Sainteloc Audi bounces back from a lap down to win