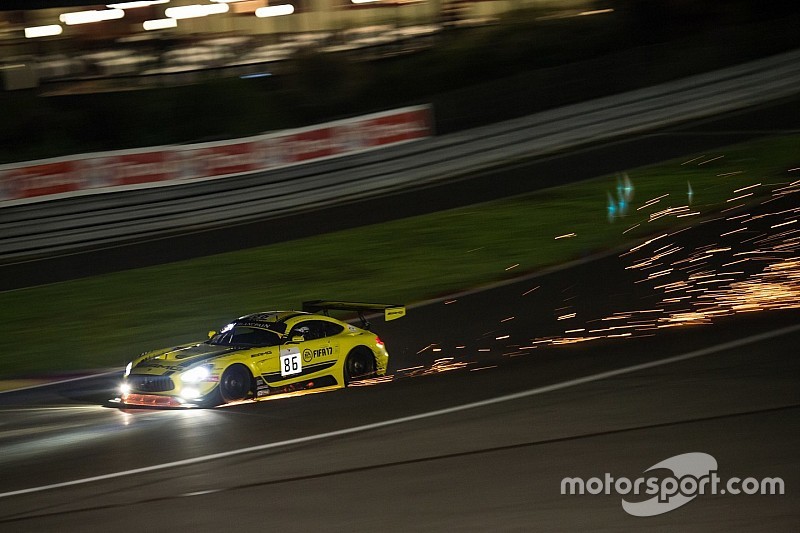 The top six Mercedes cars have had their times deleted from Friday's Superpole qualifying session at the 24 Hours of Spa, and will have to serve a five-minute stop-go penalty during the race.

Mercedes dominated the Top 20 qualifying session, locking out the first three rows of the grid. However, thanks to a wave of penalties, it will be an Audi starting on pole position.

The first six Mercedes entries, meanwhile, will be shifted to the back of the Top 20 for the start, and will need to serve a five-minute stop-go during the race.

According to documents released by the Blancpain Endurance Series, the Superpole times have been deleted due to a “breach of Article 6 and 10.1 of 2016 BGTS Sporting Regulations”.

Article 6 in the regulations reads: “Competitors must ensure that their cars comply with the conditions of eligibility and safety and with the technical regulations throughout the Event.”

Article 10 reads: “Events are first and foremost reserved for the following categories of cars : 1) GT3 cars with an FIA homologation.”

The document also confirms that: “IA (ignition timing) does not comply with the homologated figures in homologation file GT3-042 - 04/01 ER page 2/2.”

The five-minute penalties have been handed out thanks to “non-sporting behaviour – presenting a car with a technical non-conformity of which the competitor should have been aware."

The offence is officially “breach of Article 7 and 47 of the 2016 BGTS Sporting Regulations."

Article 7 reads: “The presentation of a car for scrutineering will be deemed an implicit statement of the conformity of the car.”

Article 47 reads: “Any incident in the paddock, pit lane or the track, such as provocative acts of any kind, verbal or physical threats or unsportsmanlike behaviour, or any incident that could be considered to be in contravention of Blancpain GT Series spirit, which is committed by a Team member or a person under the responsibility of a Competitor, may be reported to the Stewards of the Meeting who will take any action they consider suitable. The Team will be held responsible for the actions of the persons within their entourage and may be penalized accordingly.”

The shake-up means that the #28 WRT Audi of Laurens Vanthoor, Rene Rast, and Nico Muller will now be the polesitting car for Saturday evening’s race start.