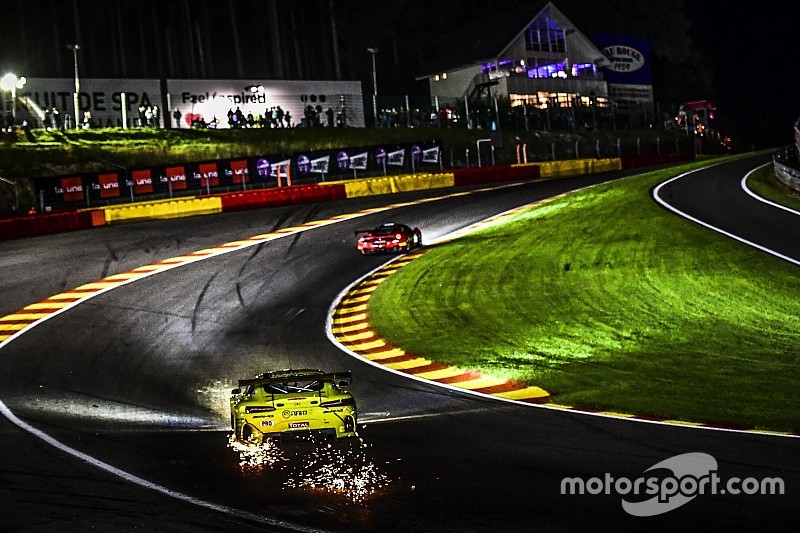 Bentley has taken control of the Spa 24 Hours at the halfway point, but remains locked in combat with BMW and Audi – with Mercedes now beginning to enter the fray after its penalty at the start.

The M-Sport-run Bentley of Maxime Soulet, Andy Soucek and Wolfgang Reip, which twice suffered drive-through penalties in the early going, surged to the head of the field as the race moved into its 11th hour.

Soulet escaped another penalty, however, when he knocked sixth-placed Edoardo Mortara’s ISR-run Audi R8 into a spin while lapping him. Bizarrely, the leader then spun at La Source under a full-course yellow due to an oil slick just as we reached the halfway point.

The Rowe Racing BMW M6 of Alexander Sims, Philipp Eng and Maxime Martin, which had been in control of the race by over a minute, took its mandatory 5-minute pitstop 90 minutes before the halfway point. It has dropped to fifth, behind the GRT Grasser Lamborghini of Mirko Bortolotti.

Audi’s hopes were dealt a double blow in this quarter of the race. The #6 Phoenix Audi, which led during the pitstop cycle, suffered a time-consuming puncture. Markus Winkelhock dragged it back into the fight for the lead, however.

The #1 WRT Audi had inherited its top-three spot, but had to make an unscheduled pitstop to replace its front splitter. That dropped it outside the top 30 positions.

After Mercedes suffered a wholesale grid-drop and 5-minute penalty, the leading SLS was the #57 Black Falcon car in seventh, driven by Hubert Haupt, ahead of the HTP entries, the #86 and #84.

This quarter of the race was affected by another long safety car period in Hour 8 for barrier repairs as the #24 Bentley crashed.