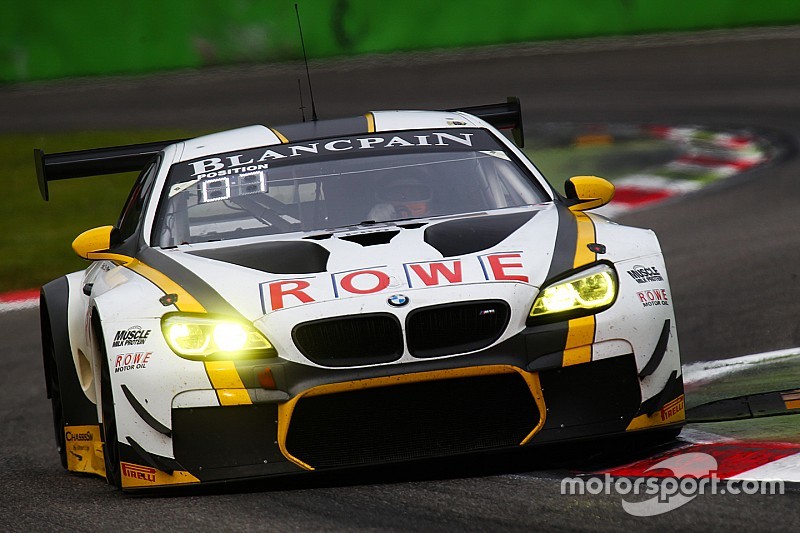 St. Ingbert – On Whit Sunday, ROWE Racing celebrated fourth place like a win in the Blancpain GT Series Endurance Cup on the British Grand Prix circuit at Silverstone. BMW DTM driver Maxime Martin from Belgium replaced BMW works driver Dirk Werner after he fell ill, and battled alongside the regular drivers, Alexander Sims from Great Britain and Philipp Eng from Austria, to secure a great finish in the #99 BMW M6 GT3, even though the team from St. Ingbert actually wanted to retire the car when it lost a gear after 13 of the three-hour race’s 83 laps.

However, the drivers, who had qualified in third place, were able to adjust fantastically well to the difficult conditions. In the last 20 minutes, Eng managed to grab fourth place from Dutch driver Indy Dontje after a safety car phase and withstood great pressure to defend it to the finish. Sims and Eng are in sixth place in the drivers’ standings for the Blancpain GT Series, with 33 points.

The same safety car phase was costly for BMW works driver Jens Klingmann from Germany and the Dutch drivers Nick Catsburg and Stef Dusseldorp in the #98 Rowe Racing car, as they lost their place in the top ten. The neutralising effect on the race meant that the trio lost the lead that they had built up over their competitors and fell back from ninth to 12th at the finish.

The race at Silverstone was the seventh race in 44 days for the Rowe Racing team. Everyone is now looking forward to the first weekend without a race since the start of the season in April and can recharge their batteries for the highlight of the season, the 24-hour race at the Nürburgring on 28th/29th May.

Rowe Racing team principal Hans-Peter Naundorf: “We are absolutely delighted with the result. This fourth place is like a win for us, as after 13 laps we never even thought we would finish the race. The guys could only drive the car in high gears and we were ready to give up. But then our drivers reacted perfectly and did a great job for two-and-a-half hours under very difficult conditions. I would particularly like to thank Maxime Martin, who gave up his free weekend at short notice on Friday to help out after Dirk Werner fell ill, and came to Silverstone to help us. It is a shame that the #98 BMW M6 GT3 didn’t manage to stay in the points. After the chasing cars closed up on them during the safety car phase, they just weren’t able to defend their position.”