Nissan GT Academy Team RJN heads to Monza in Italy this weekend for the first round of the Blancpain Endurance Series. The defending Pro-Am champions have an international team of drivers for 2014, hailing from Japan, Portugal, Russia, the UK, Germany and the USA.

The No.35 Nissan GT-R NISMO GT3 will be raced by 2013 GT Academy Europe winner, Portuguese Miguel Faisca. He will be joined by Katsumasa Chiyo, who comes to the team from Super GT in Japan on a season-long NISMO Global Driver Exchange. A familiar face from last year completes the line-up in No.35 as Mark Shulzhitskiy is back, playing super sub to the 2013 GT Academy Russian winner, Stanislav Aksenov, while he awaits his visa. 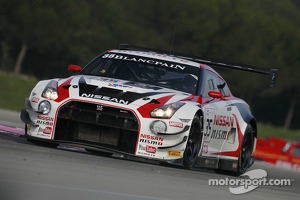 On the other side of the garage the sister Nissan GT-R NISMO GT3 – bearing the No.80 to celebrate Nissan’s 80th year – will be raced by the winners of the US and German 2013 GT Academy competitions, Nick McMillen and Florian Strauss, along with Nissan regular Alex Buncombe.

All six NISMO Athletes have a common goal in the Blancpain Endurance Series and that is to defend the 2013 team and driver Pro-Am titles.

“The new NISMO Athletes have only been with us for a few months but they have experienced the most comprehensive development programme for the Academy yet.” said Darren Cox, NISMO’s Global Head of Brand, Marketing and Sales. “Nissan continues to innovate with development techniques and we are looking to learn from other sport’s best practices. I’m proud to welcome a Chiyo-san to the team; having a Japanese driver full time in Europe just highlights how global our motorsport organisation is becoming”.

“Defending our Blancpain title in 2014 is a huge challenge for us,” continued Cox. “This championship is like the Champions League of GT3 racing: all the best national teams competing across Europe. Despite the huge competition we hope to be fighting near the front with this new driver line up.”

The track action gets underway at Monza this Friday with a special test for the Bronze-ranked drivers at 16:25. Qualifying is on Saturday at 15:20 and the three-hour race gets the green light at 14:45 on Sunday.

Covers come off factory Nissans ahead of Bathurst