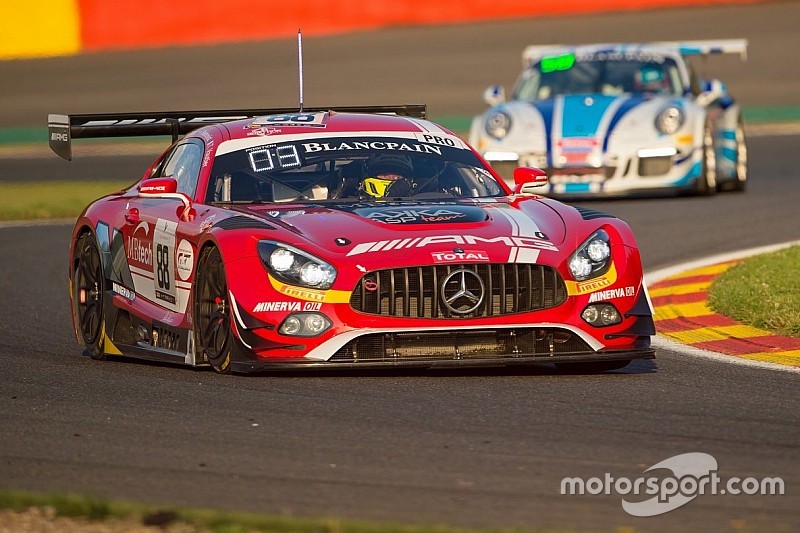 The start of the 24-hour race caused mixed emotions for Mercedes-AMG: Mercedes-AMG GT3 cars set the six fastest times in the Super Pole session. Prior to the start of the race on Saturday, a decision by the stewards of the meeting led to five minutes of the race and the first six positions on the starting grid being lost. Unaffected by this, the teams immediately started an impressive progress. The successful strategy to come in for the stop and go penalties at an early stage paid off: shortly after serving the penalty, the field was slowed down by a yellow flag situation, which kept the loss of time limited.

Later in the race, the Mercedes-AMG GT3 cars were able to make up numerous positions, particularly during the night from Saturday to Sunday. With the #57 (Black Falcon), #88 (AMG-Team AKKA ASP), #86 and #84 (both AMG-Team HTP Motorsport), four Mercedes-AMG GT3 succeeded in establishing themselves within the top ten at this difficult stage of the race.

The final quarter of the race started with heavy rain showers. There were numerous collisions and retirements in the field. The #57 Black Falcon Customer Sports car also lost valuable positions due to a technical problem, but initially was able to continue its race. Things were going better for the #00 AMG-Team Black Falcon car that was able to move up to a position within reach of the top ten with Bernd Schneider behind the wheel. At this stage, good pit stop and tyre strategies from the teams also contributed to the Mercedes-AMG GT3 gaining further positions. Following the retirement of the leading car at that time on Sunday morning, Renger van der Zande (NED) put the #88 Mercedes-AMG GT3 on course for a podium for the first time in the race.

The closing stages of the race initially took place in fully dry conditions. In the final half hour, however, a downpour and aquaplaning caused chaotic situations on the track and led to the positions being mixed up once more. Maximilian Götz, the last driver in the #86 car, also had to come in for a drive-through penalty, after which he lost the second place he had until then. Eventually, he crossed the finish line in fifth place. With the #88 Mercedes-AMG GT3, final driver Felix Rosenqvist managed to stay out of all the troubles and finished second after 531 laps, 1 minute 55.408 seconds down on the winners. Driving the #84 sister car of the AMG-Team HTP Motorsport, Jazeman Jaafar completed the triple top ten classification.

The #89 AKKA ASP Mercedes-AMG GT3 finished in 19th place. With this result, Laurent Cazenave (FRA), Michael Lyons (GBR), Daniele Perfetti (SUI) and Morgan Moullin-Traffort (FRA) were also classified fourth in the PRO-AM category. The #00 AMG-Team Black Falcon entry finished in 20th place. For the #56 Black Falcon car, the 24-hour race resulted into a 26th place finish. Black Falcon’s second Customer Sports car, the #57 car, didn’t make it to the finish: during the heavy rain just before the end of the race, final driver Andreas Simonsen (SWE) slid off the track. His Mercedes-AMG GT3 was collected by another car. For safety reasons, the Swede was taken to a medical check, but thanks to the high safety level of the Mercedes-AMG GT3, he remained unscathed.

Jochen Bitzer, head of AMG Customer Sports: “After such a turbulent race, I am all the more happy with the podium finish and the three Mercedes-AMG GT3 in the top ten. In spite of the bad situation after the Super Pole session, all teams and drivers have shown a great competitive spirit during the race. With a great performance and good tactics, they managed to work their way up. Too bad that Maxi Götz still incurred a drive-through penalty just before the end. Thankfully, Andreas Simonsen escaped unscathed from the accident through no fault of his own. This weekend really had everything in store. Many thanks to all our drivers and teams for their efforts."

Felix Rosenqvist, AMG-Team AKKA ASP #88: “This was my first endurance race and fortunately, I quickly found my way. We came here as outsiders and we finished second, because our entire team has done a great job and always made the right decisions. We had never expected this, because we made it all the way from the back to the front. At the end, we were a little bit lucky with the rain as well. For us, this result is a great success.”

Maximilian Götz, AMG-Team HTP Motorsport #86: “Of course, I am disappointed, because our result could have been better. We were fighting all race long and had a podium finish within reach. The mistake in the final half hour prevented the success, but things like that can happen in motorsport. Now, we just have to come back and try again next year.”

Jazeman Jaafar, AMG-Team HTP Motorsport #84: “We made it to the finish, that was our main goal. We are all very happy with our sixth place, even though we probably could have done better. The speed was there, but we sometimes had bad luck with the full course yellows. During these neutralisations, we wanted to make some pit stops, but we just missed the time slot a few times. All in all, it was great fun."