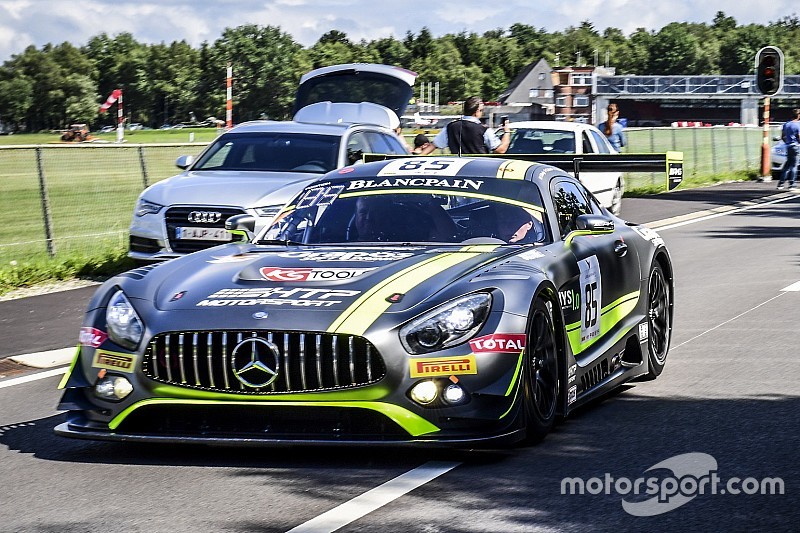 The Super Pole session, an individual two-lap affair for the 20 fastest cars from qualifying, took place on a fully dry track after changeable conditions earlier in the day.

Spa-Francorchamps (BEL). The teams with the Mercedes-AMG GT3 have got themselves perfect starting grid positions for the Spa 24-hour race: the cars from Affalterbach locked out the first three rows on the grid and will be starting from positions 1, 2, 3, 4, 5, and 6 for the classic endurance race in Belgium. In the Super Pole session, Clemens Schmid (AUT) ended up fastest in the field of the GT3 teams with a time of 2 minutes 18.025 seconds behind the wheel of the #85 HTP Motorsport Mercedes-AMG GT3.
The 68th running of the 24-hour race at Spa-Francorchamps got underway with a faultless performance by Mercedes-AMG. After pre-qualifying, qualifying and the mandatory night qualifying on Thursday, six of the eight Mercedes-AMG GT3 entered for the race were among the first ten in the combined qualifying results and thus qualified for the Super Pole session on Friday evening.

The Super Pole session, an individual two-lap affair for the 20 fastest cars from qualifying, took place on a fully dry track after changeable conditions earlier in the day. During the half-hour long session, spectators got to see a battle against the stopwatch that remained thrilling until the end, with numerous changes at the top of the timing screens. With his first flying lap, Maro Engel (GER) was the first to take first place for the AMG-Team Black Falcon with the #00 Mercedes-AMG GT3.

Then, Clemens Schmid (AUT) caught the attention: with the #85 HTP Motorsport Mercedes-AMG GT3, the Austrian completed his lap of the seven kilometres long track in 2 minutes 18.025 seconds and thus posted a new intermediate fastest time that remained unbeaten until just before the end. Second-fastest in qualifying, Maximilian Götz (GER) was the penultimate driver to start his Super Pole shoot-out. With the #86 HTP Motorsport Mercedes-AMG GT3, he set a new fastest time on his second flying lap. Due to a yellow flag infringement, however, he was disallowed his lap time after the session.

Alongside the #85 HTP Motorsport car, the #88 AMG-Team Akka ASP entry will be starting from the front row into tomorrow’s race: during the Super Pole session, Felix Rosenqvist (SWE) was able to beat the time that Maro Engel had set with the #00 AMG-Team Black Falcon car to end up third. At the finish line, Rosenqvist was only 0.009 seconds short of Schmid’s pole-winning time.
Maximilian Buhk (GER) secured fourth place with the #84 AMG-Team HTP Motorsport car. The #56 Black Falcon entry qualified fifth-fastest with Daniel Juncadella (ESP) behind the wheel in Super Pole.

Clemens Schmid, HTP Motorsport #85: “Being on the front row for the season highlight thanks to my own performance is an incredibly great feeling. Had someone told me four years ago that I am on the front row for my second participation here, I wouldn’t have believed it. Now, I am mega happy. I made a mistake on my first lap, that was like a wake-up call for my second flying lap.”

Felix Rosenqvist, AMG-Team Akka ASP #88: “Starting up front is always nice as it means you have less traffic to deal with during the opening laps. Qualifying was fun, but it doesn’t determine the outcome of the race. However, it also shows that we are absolutely competitive. The most important thing is that our team has been among the contenders up front in all weather conditions we have had so far and that is what counts.”

Maro Engel, AMG-Team Black Falcon #00: “That was a very strong team performance .The car was fantastic to drive. Unfortunately, yellow flags were out at the end of my second lap and I had to back off, but the grid position is very good. We brought the car back in perfect condition and we are now looking forward to a long and certainly very tough 24-hour race.”

Maximilian Buhk, AMG-Team HTP Motorsport #84: “A lock-out of the top six for Mercedes-AMG is a great result, of course. I am also happy with my own performance. It wasn’t perfect, but the situation in general is good. However, one can also start this race from 20th place on the grid and still win. Tomorrow, so many things can happen and you need so much luck that our fourth place doesn’t mean that much yet.”

Daniel Juncadella, Black Falcon #56: “I am very happy with my lap. The car has been working perfectly all week long already. However, I am also slightly disappointed, because I always had traffic on track. All in all, however, this is a good result, and fortunately, the race is very long, so let’s wait and see what can still be done.”

Maximilian Götz, AMG-Team HTP Motorsport #86: “The decision by the stewards of the meeting to cancel my fast lap is disappointing, but that is what the rules are like. I would have loved to start from pole position here. Of course, sixth place on the grid is still a good position to start from. I am happy because of the strong team performance.”

Jochen Bitzer, head of AMG Customer Sports: “Congratulations to our teams for a closed performance. They all have done a super job. Having six of the eight cars in Super Pole and then on the three rows of the grid, that really is a perfect situation to start from, but, of course, by no means a guarantee for a good race result. We still have 24 hours ahead of us and the classification is made up only after that."

* subject to changes at short notice