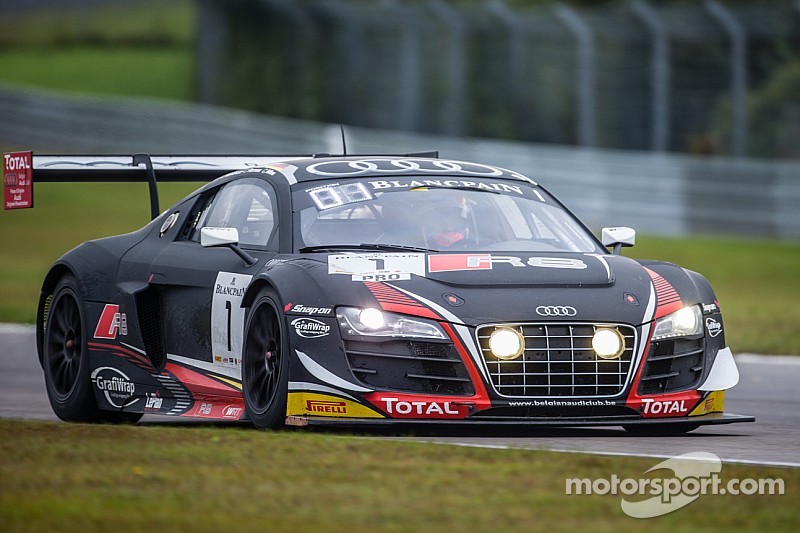 In Pro-Am the drivers’ title went to the Italian duo of Andrea Rizzoli and Stefano Gai, despite finishing only third in their category at the Nürburgring. The Pro-Am team win went to the #12 TDS Racing BMW of Nick Catsburg and Henry Hassid, while Ian Loggie and Julian Westwood took top spot in the Gentlemen Trophy in the #22 Team Parker Racing Audi. Despite a difficult start to the race, Francisco Guedes and Peter Mann managed to finish in 7th, enough to secure the Gentlemen Trophy title.

I am sure it will take a while before I will fully realize that I am the new Pro Cup champion.

Thick fog, heavy rain: the Nürburgring had reserved its trickiest conditions of the weekend for the start of the iRacing.com Nürburgring 1000, the final round of the 2014 Blancpain Endurance Series. The start was given behind the safety car, but after twenty minutes the lights went to green. It did not take long for several of the title candidates to get into trouble. The #98 ART Grand Prix McLaren and #26 Sainteloc Racing Audi were involved in an incident, after which each of the cars spent several minutes in the box for repairs.

For Championship leader Vanthoor, whose team-mates Christopher Mies and Cesar Ramos drove the opening stints of the race, the only remaining threats were the #7 M-Sport Bentley and the #84 HTP Motorsport Mercedes. But with Harold Primat spinning off in the latter and the Bentley gradually dropping down the order, Vanthoor could focus on winning the race during the final hours of the race. Even a partially drying track and a – at first – risky final stint on slick tyres could not stand in the way of the Belgian taking his second consecutive win and a first endurance title. The victory of the #1 Audi gave the Belgian Audi Club Team WRT its third Pro Cup Teams’ title in four years.

Behind the Audi, the fight for second turned out to be a duel between two Mercedes SLS AMG cars. During a safety car intervention halfway through the race, the #19 Black Falcon Mercedes had worked itself to P1 by pitting later than the other cars, and Andreas Simonsen, Hubert Haupt and Abdulaziz Al Faisal managed to stay well within the top three from then on. During the final hours of the race the #85 HTP Motorsport Mercedes of Dusseldorp, Afanasiev and Buhk managed to gain ground on the Black Falcon machine and regain second spot.

In the Pro-Am Cup the title fight initially went in Francesco Castellacci’s favour, with his team-mate Marco Seefried taking the lead of the category. However, Seefried was quickly passed by Alex Buncombe in the tricky conditions, with the Nissan driver at one point even taking the lead overall. After the pitstops both cars dropped down the order, and when Castellacci ended up in the gravel trap after contact with another car, his title fight was over.

Andrea Rizzoli and Stefano Gai – sharing the #90 Scuderia Villorba Corse Ferrari with Thomas Kemenater – had climbed up the order before that incident and had no problem in holding to their lead in the Pro-Am Cup drivers’ standings. The Teams title was still the subject of a fierce fight between Scuderia Villorba Corse and TDS Racing, which was leading the category with the #12 BMW of Henry Hassid and Nicky Catsburg. Despite a drive-through for a pitstop infringement, the Italian squad held on to third in the category, enough to take the team’s title with three points in hand.

Nicky Catsburg and Henry Hassid took their second win of the season with an impressive performance, finishing fourth overall as well. Devon Modell, Anders Fjordbach and Vladimir Lunkin, the youngsters on the #18 Black Falcon Mercedes, scored the car’s best result by finishing in second and sixth overall.

In Gentlemen Trophy, the race started badly for the championship leaders Peter Mann and Francisco Guedes, when their team-mate Filipe Barreiros went into the gravel trap during the opening hour of the race. The #51 AF Corse Ferrari managed to rejoin the track however, and finishing 7th in the category proved to be just enough to conquer the drivers’ and teams’ titles. The race was largely dominated by the Sport Garage Ferrari cars, but during the final hours they lost their lead through several mistakes and technical problems.

That meant that the #22 Team Parker Racing Audi, driven by Ian Loggie and Julian Westwood, could take the lead,with the two Brits holding on to first place until the chequered flag. It was the first time this season that the Gentlemen Trophy was not won by a Ferrari. In second was the #458 GT Corse by Rinaldi Ferrari, which ended up in second in both championships as well, with the #111 Kessel Racing Ferrari finishing in third.

Laurens Vanthoor (#1 Belgian Audi Club Team WRT Audi, Pro Cup champion): ‘Just like after winning the Sprint title last year, I am sure it will take a while before I will fully realize that I am the new Pro Cup champion. This is the result of team work though, and I would like to thank all the team-mates that helped me to become champion. After winning the Total 24 Hours of Spa 2014 is really becoming a great season for me.’

Stefano Gai (#90 Scuderia Villorba Corse Ferrari, Pro-Am Cup champion): ‘This was an amazing race, and thanks to Ferrari and the Scuderia Villorba we managed to take the title. It has not been easy this season, we had to overcome some difficulties, but that makes it even more satisfying.’

Andrea Rizzoli (#90 Scuderia Villorba Corse Ferrari, Pro-Am Cup champion): ‘There is not one factor that gave us the title this year. We have been very constant during the whole season and in the end that paid off.’

Francesco Guedes (#51 AF Corse Ferrari, Gentlemen Trophy champion): ‘When I saw our car in the gravel trap early on in the race, I thought it was all over. But we managed to keep going, even though we were well down the order. We have been fighting hard all year, and in the end that gave us the title.’

Peter Mann (#51 AF Corse Ferrari, Gentlemen Trophy champion): ‘Becoming champion is a dream come true, but it was a dream held in nightmare conditions! Races like this are awful for an old guy like me, but in the end we managed to get points, like we did in every other race of the season. That consistency and our good result in the Total 24 Hours of Spa was key in becoming champion.’

Christopher Mies (#1 Belgian Audi Club Team WRT Audi, 1st in Pro Cup): ‘I am very happy that I could help the Belgian Audi Club Team WRT in getting both the drivers’ and teams’ titles. I had some good fun during, with some nice duels with Kevin Estre and with the Black Falcon Mercedes. I was not taking any risks however, because I knew how important it was to get the car to the finish.’

Stef Dusseldorp (#85 HTP Motorsport Mercedes, 2nd in Pro Cup): ‘It’s to be on the podium again. We have been quick all season, but we were unlucky sometimes. It’s good to end that streak of bad luck, so ending in P2 is a good thing.’

Andreas Simonsen (#19 Black Falcon Mercedes, 3rd in Pro Cup): ‘It was really difficult in the beginning of the race, because I could hardly see where we were going. But I managed to keep my nose clean and climb up the order. We were a bit surprised that we were in P1 during the safety car-period, but my team-mates did an excellent job in keeping our podium position.’

Henry Hassid (#12 TDS Racing BMW, 1st in Pro-Am Cup): ‘This must have been the hardest race of my life. I drove four of the six hours in these difficult conditions, and that is not easy for a 55-year old. But thanks to the excellent stint of Nicky we managed to get another. We could have gone for the title, but we had some bad luck this year. I would love to have a go again next year though.’

Julian Westwood (#22 Team Parker Racing Audi, 1st in Gentlemen Trophy): ‘The start of the race was horrendous. I spun off in the third corner! But we knew that our car had the speed, it really went like a dream. But even when we were in the lead, the conditions proved treacherous. I think we have come a long way since the beginning of the season, and we are ready to try again next year.’

Villorba Corse is Pro-Am Cup champion at the Nurburgring 1000