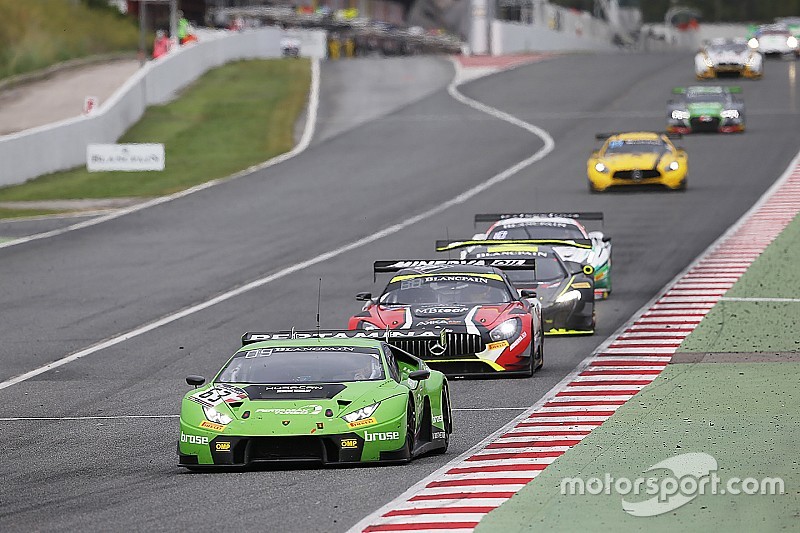 The Grasser Lamborghini squad will defend its Blancpain GT Series drivers' titles with unchanged line-ups in 2018.

Bortolotti and Engelhart will again race together in the Sprint Cup as they attempt to repeat their success in the overall Blancpain classification, which combines the points from the two segments of the series.

The Austrian Grasser team has expanded its Blancpain campaign in 2018 from two to three full-season Huracans in the top class.

Former IndyCar and GP2 driver Franck Perera will contest both legs of the championship with a team he joined for a successful GTD class assault on the Rolex 24 at Daytona in January.

The Frenchman, who finished third in last year's Sprint Cup with the HTP Mercedes team, will share with Grasser regular Rolf Ineichen and one driver who had yet to be announced in the enduros, and 20-year-old Loris Hezemans in the sprints.

Hezemans, son of 1978 Daytona 24 Hours winner Toine, joins the team after racing GT3 and TCR machinery sporadically for the past two seasons.

Ezequiel Perez Companc and Raffaele Gianmaria will again drive together in the enduros with a third driver who has yet to be announced. Companc will be joined by Caldarelli for the sprints races.

The three Grasser BGTS Endurance Cup pro class Huracans were among the 26 cars selected for the series last week after a cap was put on the number of entries in the top division for 2018.

HTP Motorsport, which has won multiple Blancpain titles since 2013, was not on the entry.

The German team is not returning full-time to the series but is investigating an assault on the Spa 24 Hours endurance round in July.

Grasser is also returning to the German ADAC GT Masters series, in which it won three races last year, with a trio of Huracans. Bortolotti and Caldarelli will drive the lead car.

Petrov to contest Blancpain GT in a Mercedes