The Ferrari 458 Italia of Kessel Racing claimed victory in the first round of the 2013 Blancpain Endurance Series at Monza this afternoon after a thrilling race to open the brand new season.

In second place was the #11 ART Grand Prix McLaren MP4-12C of Andy Soucek/Antoine Leclerc and Mike Parisy. Rounding out the PRO Cup podium was the #69 Gulf Racing McLaren MP4-12C of Nico Verdonck/Rob Bell and Adam Carroll who were embroiled in a titanic fight with the #13 Belgian Audi Club Team WRT Audi and the leading PRO-AM Ferrari of AF Corse in the closing stages, driven by Andrea Bertolini. Adam Carroll just pipped the Audi on the line by 0.028s in an amazing finish which wowed the crowd. 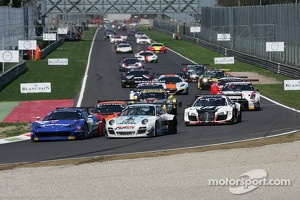 Taking the win in the PRO-AM class were 2012 reigning champions Niek Hommerson and Louis Machiels in their #5 0AF Corse. Their team mate Andrea Bertolini completed the final stint of the race to secure the victory and an excellent 5th place overall to kick start their defence of the PRO AM Cup title.

In the Gentlemen’s Trophy class the victory went to the SOFREV Ferrari 458 Italia trio of Jean-Luc Beaubelique/Patrice Goueslard and Jean-Luc Blanchimain after an impressive race from the all-French team.

60 GT3 cars took part in an unforgettable first race of the new season at Monza today with 171 drivers from 28 countries took part in the first race weekend of 2013, reflecting the truly global attraction to the Blancpain Endurance Series.

The next round of the Blancpain Endurance Series will take place at Silverstone on the weekend of 1-2 June.