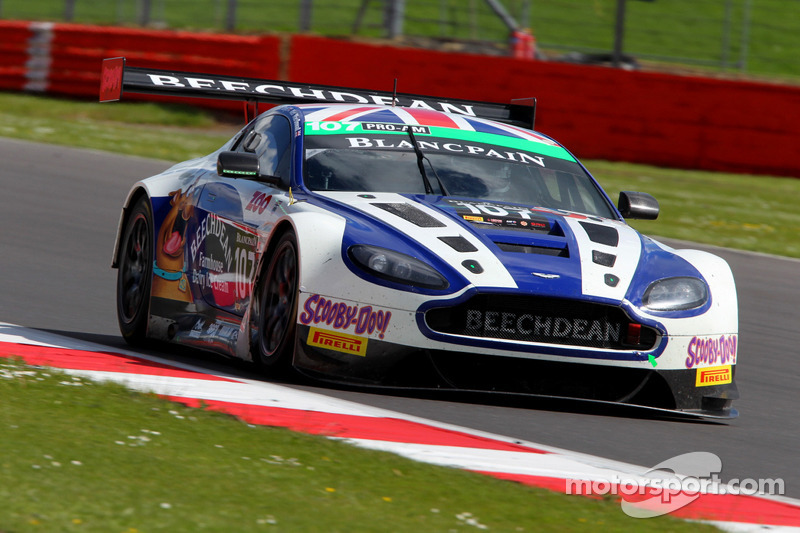 Daniel Lloyd will rejoin the Beechdean Aston Martin Racing team over the weekend 26th/27th July for the fourth round of the Blancpain Endurance Series.

Daniel Lloyd delivered an outstanding performance on his maiden outing with the Beechdean Aston Martin Racing Team at Silverstone Grand Prix Circuit on Sunday, 25th May, to put the British squad in the thick of the Pro-Am class points battle during round two of the Blancpain Endurance Series.

Qualifying the team’s Aston Martin V12 Vantage GT3 in a very competitive 11th position overall, despite precious little practice due to heavy rainfall on Saturday, the Huddersfield driver took the first stint of the three-hour race and climbed into the top five as well as second in the Pro-Am Class.

Team-mates Andrew Howard, the Beechdean owner, and Alex MacDowall took the second and third stints respectively and the No.107 car ultimately ended the encounter seventh in Pro-Am and in 17th position in the outright classification from a total entry of more than 40 cars.

In addition to being Daniel’s maiden appearance in the globe’s biggest GT3-based championship, the weekend also marked his first race at the wheel of an Aston Martin – he ordinarily pilots a McLaren in the sister Blancpain Sprint Series – and also the longest duration contest of his career.

“I’m over the moon with my stint, I did everything right and the Aston was fantastic”, commented the 22-year-old, “The team has been a pleasure to work with, they’re all mega guys at Beechdean and it’s been great working with the Aston Martin Racing boys. It’s a different ball game to the Sprint Series but I’ve loved every minute and can’t wait for the next run at Spa in July.”

Horrendous weather blighted the opening practice on Saturday morning, meaning very truncated preparation for the championship rookie. Daniel headed into qualifying with very few miles under his belt but he produced an eye-catching performance, lapping 10th fastest in his session with a time of 2m01.953 seconds – ultimately good enough for 11th overall.

Taking the opening stint of the dry three-hour contest on Sunday afternoon, the British driver maintained position off the rolling start before beginning to attack. Driving beautifully, Daniel moved into the overall top 10 into Copse at the start of lap two and then sized up a tremendous move for ninth, around the outside into Village, which he pulled off expertly.

Climbing into eighth on lap three, he quickly closed up behind the similar V12 Vantage of Richard Abra but the latter proved a tough nut to crack as he stoutly defended. Delaying Daniel, and enabling Christopher Mies to latch onto their tail in his Audi, the trio ran nose-to-tail for a number of laps before the West Yorkshireman made the breakthrough on lap 17.

No sooner had he passed Abra for seventh place, Daniel immediately pulled away and reeled off some excellent laps before moving into the top six when the Bentley of Guy Smith had to serve a drive-through penalty. As the first round of mandatory pit-stops started, Daniel moved up into fifth overall and second in the Pro-Am class before pitting himself after 65 minutes behind the wheel.

During the final hour, the appearance of the Safety Car didn’t play to the Beechdean squad’s favour and so the team had to settle for seventh in Pro-Am. Although disappointed with the final result, Daniel was elated with his first appearance in the Endurance Series.

“When the Safety Car came out later on it definitely cost us”, he explained, “Andrew and Alex both did solid stints, we were just a bit unfortunate with how things played out. Without any practice I learnt so much about the Aston in just those few laps in qualifying, then the race was fantastic. I think I probably got my hopes up a bit too much that we might have had a chance of the podium.

“There were over 40 guests with us this weekend and they all had a fantastic time in the Beechdean hospitality, huge thanks to all of my sponsors and a big thank you, of course, to Andrew [Howard] and everyone at Aston Martin Racing – it’s been mega.”

Daniel will rejoin the Beechdean Aston Martin Racing team over the weekend 26th/27th July for the fourth round of the Blancpain Endurance Series, his first ever twice round-the-clock endurance race, the Total 24 Hours of Spa. Before then, he will be back with his Bhai Tech Racing McLaren for the third event of the Blancpain Sprint Series on 5th/6th July at Zandvoort in The Netherlands.

Magnificent podium for Vanthoor at Silverstone