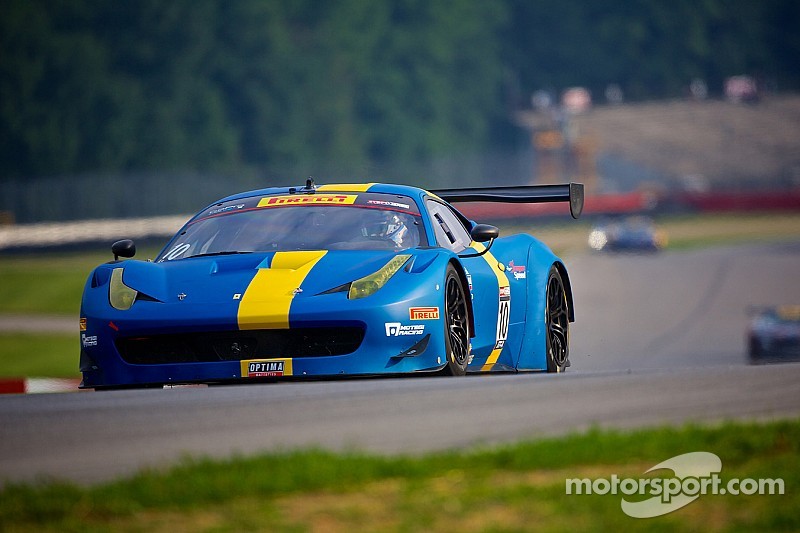 DragonSpeed are becoming the first US team to join the world’s premier GT3 endurance championship.

As previously announced, DragonSpeed will run the same Ferrari 458 GT3 used in PWC last season, refettled to European GT3 specification by chief engineer Mark Schomann, recognized as a leading Ferrari GT racing expert from his years with the Risi, Krohn, and RAM teams. The 458 itself is an established pacesetter in global GT3 competition and especially suited to the European tracks. The car’s first outing will be the BES pre-season test at Paul Ricard in the south of France on 11-12 March.

I’m proud to join their Spa 24 lineup for what I know will be a competitive effort with a well-prepared Ferrari...

On the driver front, 2014 team leader Henrik Hedman will be partnered by DragonSpeed boss Elton Julian, returning to the cockpit for his first full season since finishing fifth in the LMP2 class of the 2012 FIA World Endurance Championship (WEC). Hedman’s debut PWC season last year saw him finish second in the GT-A division and ninth overall in the final points on his way to Rookie of the Year honors. Julian’s long but sporadic career has included success in US and European single-seater and sportscar competition spanning 25 years.

To qualify for the Pro-Am class, DragonSpeed needed another Bronze-level driver, selecting 53-year-old Thomas Kemenater. A member of Italy’s World Cup ski team in the early 1980s, Kemenater didn’t follow in the tracks of skiing contemporaries Franz Klammer and the Mahre brothers in taking to four wheels until 2002. Making up for lost time, Thomas won the amateur and semi-pro divisions of the Ferrari Challenge Italia in his first two seasons.

In 2008, he stepped up to GT2 (now called LM-GTE), contesting selected races while also working as a driver coach for Ferrari’s Corse Clienti programs. 2014 saw him emerge as a frontrunner in the European Le Mans Series, finishing ninth in the LM-GTE point standings despite missing one of the five races.

For the BES’ flagship event, the Spa 24 Hours, Pro-Am teams can field one driver from each of the Platinum, Gold, Silver, and Bronze categories. Ryan Dalziel, Elton Julian, Anthony Lazzaro, and Henrik Hedman will represent the respective rankings in DragonSpeed’s lineup for the world’s top GT3 event. Scotland’s Dalziel is an international endurance racing star who claimed the WEC LMP2 title plus victories at Le Mans and Sebring in 2012. Lazzaro has become a stalwart of American sportscar racing and a regular Ferrari GT pilot in recent years, having spent his early career in open-wheel and stock cars.

Henrik Hedman: “Running the Blancpain series this year is another step toward my ultimate goal of competing at Le Mans. Endurance racing is nothing new to the team or the other drivers, so all the pieces are in place to help me learn the ropes. The last piece was bringing Thomas on board. From having him as my coach in the Ferrari Corse Clienti 599xx program, I could see he would be a really fast Bronze driver and fit right in with the team chemistry we’ve built at DragonSpeed. The goal is to run strongly this year and have a good time doing it!”

“For the last couple of years, my race cars have run a Swedish flag livery in honor of where I was born. But in 2015, my wife and I will become eligible for US citizenship. To celebrate this and the fact that our two boys were born in the US, I decided to go with an American theme this year. Actually, I’ve gone a bit further and adapted the color scheme used by the great 1970s daredevil, Evel Knievel, one of the names who made America seem such an exciting place to me as a kid.”

Thomas Kemenater: “I’ve competed against many of the BES drivers, so I know how tough the Pro-Am category is, but I think we can perform well and surprise a few people this season. For my part, I hope my experience of the European GT scene will help the team. I know from coaching Henrik over the last few years how high his potential is and the incredible progress he’s made. Elton’s record speaks for itself, but I can also see that he brings a fantastic mindset as well as speed to the program. I can’t thank DragonSpeed enough for this opportunity and can’t wait to jump in the car.”

Ryan Dalziel: “I’ve known Elton for a few years now, as both driver and team owner, and been really impressed with how he’s built DragonSpeed into a serious GT team in such a short time. I’m proud to join their Spa 24 lineup for what I know will be a competitive effort with a well-prepared Ferrari. I’ve raced LMP2 at Spa, so going flat out through Eau Rouge in the 458 GT3 should be manageable! I absolutely think we can contend for the outright win. I want to thank Elton and Henrik for the opportunity, and look forward to kicking some butt in Belgium come July.”

Anthony Lazarro: “I’m really excited about my first time at Spa. I’ve heard so much about the place, but what I’m really looking forward to is the moment the talking stops and I head out of the pits into Eau Rouge in a star-spangled Ferrari! Although I’ll be new to the track, I’ll be right at home in the 458 GT3. It’s a proven winner at Spa, especially in the Pro-Am category. The 458’s medium downforce character is perfect for the track and makes for excellent driveability at all skill levels and in all conditions.”

Elton Julian: “I couldn’t be prouder of the group of drivers we’ve assembled for our BES program. I know all the guys at varying levels, but well enough to know that they all possess the right skills and temperament for endurance racing. The lineup reflects all the advantages of the SRO system and gives Henrik what he needs to take the next steps in his learning process. Thanks to Henrik’s active involvement and support, we have the rest of the resources we need as well: the right car, our best crew ever, and a terrific location. I’m so grateful for his help in expanding DragonSpeed’s horizons.”