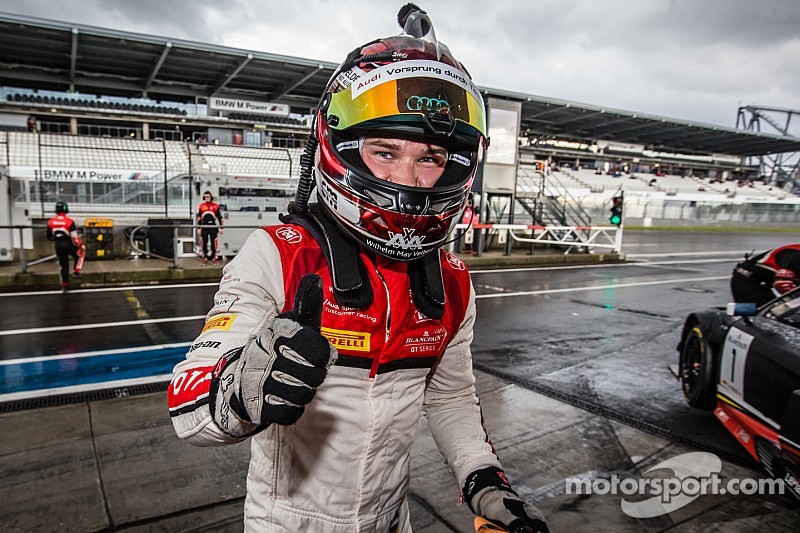 The No. 1 Belgian Audi Club Team WRT Audi ended up on top at the conclusion of BES qualifying.

Christopher Mies took pole for the final round of the 2014 Blancpain Endurance Series, at the wheel of the #1 Belgian Audi Club Team WRT Audi. The German set his quickest lap in Q2, just before a rain shower hit the Nürburgring. Mies’s time proved to be more than four tenths of a second quicker than the one set by his team-mate Marc Basseng on the #3 Audi.

Marco Seefried in the #52 AF Corse Ferrari set the third time overall and the quickest time in Pro-Am, while Alexander Matschull proved to be the fastest Gentlemen Trophy driver in the #458 GT Corse by Rinaldi Ferrari.

It’s a good thing that the Belgian Audi Club Team WRT has two cars on the front row and my focus is now on helping the team to win the team’s title...

The Qualifying session for the iRacing.com Nürburgring 1000 was decided halfway through Q2, just before a rain shower made it impossible to improve lap times. At the start of Q2, Christopher Mies was one of the first to leave pitlane in his #1 Belgian Audi Club Team WRT Audi. Shod with new tyres, he set the fastest time of the session, with a lap of 1’55.708. Mies was transferred to the #1 Audi before the start of the weekend, and now has Cesar Ramos and Pro Cup points leader Laurens Vanthoor as his team-mates.

Shortly after setting his poletime, Mies was quickly followed by his countrymen Marc Basseng in the #3 Belgian Audi Club Team WRT Audi and Marco Seefried in the #52 AF Corse Ferrari. Seefried, who shares the car with Pro-Am Cup championship contender Francesco Castellacci, also set pole in Pro-Am Cup. Castellacci’s former team-mates and co-leaders in the standings Andrea Rizzoli and Stefano Gai ended up in sixth position among the Pro-Am cars, driving their #90 Scuderia Villorba Corse Ferrari.

Steven Kane’s time in Q1 was enough to put the #7 M-Sport Bentley on the second row, while the third row will be occupied by the #99 ART Grand Prix McLaren and the #8 M-Sport Bentley. The Sainteloc Racing trio of Guilvert-Ortelli-Sandström, second in the Pro Cup driver standings, put their #26 Audi on the fifth row.

Alexander Matschull, driving the #458 GT Corse by Rinaldi Ferrari, took pole in the Gentlemen Trophy. Matschull, together with team-mate Frank Schmickler, is going for a fourth win of the season, which could also give them the Gentlemen Trophy’s title. They will have to make up a 22-point deficit on the AF Corse-duo Peter Mann and Francisco Guedes, who will start the race from the last row on the grid.

Christopher Mies (#1 Belgian Audi Club Team WRT Audi): “The plan was to start Q2 on used tyres, but when we saw the dark clouds we changed our tactics and shod the car with new Pirelli’s. It proved to be the right choice. I managed to do two quick laps, before it started to drizzle. It’s a good thing that the Belgian Audi Club Team WRT has two cars on the front row and my focus is now on helping the team to win the team’s title and to help Laurens to remain on top of the Pro Cup standings.”

Marco Seefried (#51 AF Corse Ferrari): “We did the right thing at the right time. Before the start of Q2 we were all running up and down the stairs to look at the clouds, because we all know the Nürburgring very well and we knew what we had to look for. It was clear that it would rain, but the question of when it would start to pour down remained. That is why we put new tyres on the car immediately as well, and it worked out great. In the race we will focus fully on the Pro-Am classification, because Francesco Castellacci still has a shot at the title.”

Alexander Matschull (#458 GT Corse by Rinaldi Ferrari): “Even though we had anticipated the rain by putting a wet set-up on the car, it was still dry when I did my lap. It gives us a good position on the starting grid, but our task in the championship remains very difficult. That is why we will focus on trying to win a fourth race this season, and then see where it gets us in the standings.”