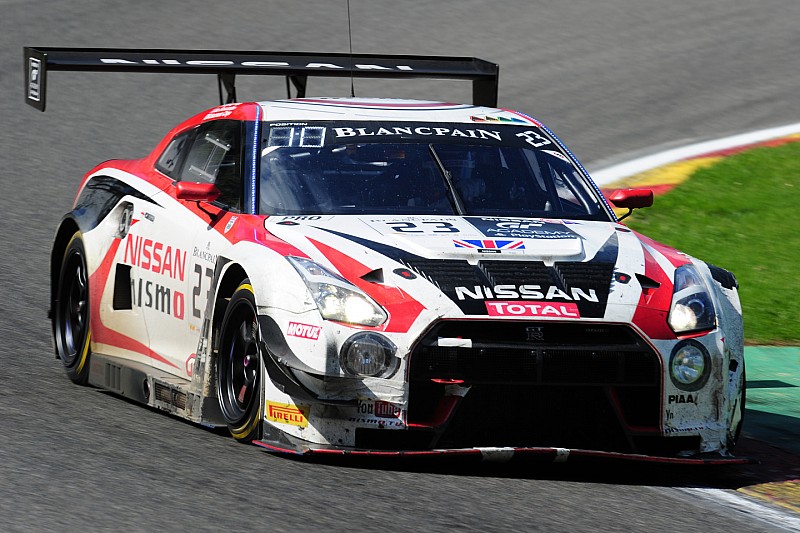 After what was arguably the most exciting race of the season, Katsumasa Chiyo, Wolfgang Reip and Alex Buncombe took the 2015 Blancpain Endurance Series drivers title. The Nissan GT Academy Team RJN GT-R trio crossed the finish line of the Nürburgring season finale in third, which gave them a three-point lead in the final standings of the season.

The overall win at the Nürburgring went to the #58 Von Ryan Racing McLaren of Rob Bell, Shane Van Gisbergen and Kevin Estre, having started from 24th on the grid. Bentley Boys Andy Meyrick, Guy Smith and Steven Kane finished in second, which gave them second in the championship as well. Fourth for the #1 Audi was enough for Belgian Audi Club Team WRT to take the teams title in Pro Cup.

In Pro-Am Cup the win went to one of the stalwarts of the Blancpain Endurance Series, the #14 Emil Frey Racing Jaguar, much to the joy of the Swiss team and drivers Gabriele Gardel, Lorenz Frey and Fredy Barth. The #16 Akka ASP Ferrari took the win in Am Cup, thus claiming the teams title in the Am Cup. Fifth place for the #24 Team Parker Racing Audi of Ian Loggie and Julian Westwood was enough to give them the Am Drivers title.

This was probably the hardest stint I've ever driven.

The tension was tangible on the starting grid for the iRacing.com GT500. There was obviously a lot at stake, with both the titles in Pro and Am Cup up for grabs. From the start it was clear that the drivers from the #7 M-Sport Bentley and the #23 Nissan GT Academy Team RJN would dominate the title race in Pro Cup. Series leaders Frank Stippler and Stéphane Ortelli never recovered from their 14th place on the grid, while the drivers of #99 Rowe Racing Mercedes - second in the standings before the final round - dropped down the order after Nico Bastian made contact with a McLaren and was penalised with a drive-through penalty.

In the early phase of the race Craig Dolby in the #173 Always Evolving Nissan managed to create a substantial gap to the quarrelling drivers behind him, but an intervention of the safety car reduced that advantage to naught.

After the first pitstops, the #173 Nissan dropped some places, leaving the fight in front to the title contenders. Wolfgang Reip managed to come out right in front of Mirko Bortolotti in the #63 Grasser Lamborghini - still in contention for the teams title - and Robin Frijns in the #1 Belgian Audi Club Team WRT car. The Dutchman had taken over from Jean-Karl Vernay after an early pitstop and had managed to make up a lot of ground.

All drivers raced on the limit, with the Nissan drivers occupying the position of provisional champions. A second safety car intervention with some 70 minutes to go was to bunch up the pack again and create some hectic situations in the pitlane, when almost all the frontrunners had their second and final pitstop.

Alex Buncombe in the #23 Nissan managed to squeeze in front of Steven Kane in the #7 M-Sport Bentley and for a while it looked like this straight fight would decide the race and the drivers title. What had escaped most of the drivers and team managers was that the #58 Von Ryan McLaren had taken an earlier pitstop during both safety car-interventions, resulting in Kevin Estre taking the lead. Before the Frenchman had taken the wheel of the orange machine, both Rob Bell - who had taken the start from 24th on the grid - and iRacing-driver Shane Van Gisbergen had driven faultless stints, giving the Von Ryan Racing team a second win of the season, after taking first in Silverstone.

The fact that he was fighting for second gave Alex Buncombe a slightly bigger margin - Steven Kane had to win the race to give Bentley the title - but the duel between the two produced some of the finest GT racing seen this season. Kane managed to muscle past with 20 minutes to go, but the stewards deemed his pass illegal and he had to slot in behind the Nissan again. Only moments later the Bentley rushed back to second, but challenging the McLaren for the win was no longer possible.

Even though he was put under pressure during the final few laps by Laurens Vanthoor in the #1 Audi, Alex Buncombe managed to hold on to third, enough to claim the 2015 Blancpain Endurance Series, together with his teammates Katsumasa Chiyo and Wolfgang Reip. They eventually beat the Bentley Boys by three points.

Outgoing champion Laurens Vanthoor crossed the line in fourth, which was enough to give the Belgian Audi Club Team WRT their fifth teams title in the Blancpain Endurance Series Pro Cup.

With the titles in the Pro-Am Cup already decided at the Total 24 Hours of Spa, the fight for the win became the main focus for the drivers and teams. For a long time it looked like a Mercedes SLS AMG would cross the line in first - both the #18 Black Falcon Mercedes and the #70 GT Russian machine had the lead at certain points in the race - but in the end it was the #14 Emil Frey Racing Jaguar who took the spoils, claiming the first win for a team that has been with the Blancpain Endurance Series since the start. Fredy Barth, Lorenz Frey and Gabriele Gardel had to hold off a late challenge of the AF Corse Ferrari of De Leener and Sbirrazzuoli to reap the rewards of four years of hard work with the unique Jaguar.

Fabien Barthez and Anthony Pons had shown some speed all year long, but the French pairing was still looking for a first notable result. The final race is as good an occasion as any, and the Akka ASP Ferrari-drivers dominated their category for most of the race. It gave the squad, which races under a Belgian licence, enough points to claim the teams' title.

The fight for the drivers crown ultimately became a very nerve-wracking affair. Both the drivers of the #56 Attempto Racing Porsche and the#24 Team Parker Racing Audi seemed unwilling to take too many risks, especially after the #111 Kessel Racing Ferrari had been penalised with a drive-through. With the Porsche finishing in third, fifth was enough to give Total 24 Hours of Spa-winners Ian Loggie and Julian Westwood the Am Cup drivers title.

Katsumasa Chiyo (2015 Blancpain Endurance Series champion): "Taking the start was not easy and I lost a couple of positions. I was stuck behind the Lamborghini for most of my stint, but we were still in a good position. What came later was a lot harder for me. Watching Alex, who drove an excellent stint, was probably the longest wait in my life. I knew I could trust Alex for 100 percent, and this title is just great."

Wolfgang Reip (2015 Blancpain Endurance Series champion): "I could not watch the final stint, it was too stressful for me. I hid in my car and only came back to watch the final five minutes of the race. I have to thank Nissan, the whole GT Academy project, my team-mates and everybody else who helped me for an amazing last three years. I went from nowhere to taking this title today. This is the absolute highlight of my career."

Kevin Estre (#58 Von Ryan McLaren, race winner): "We have to thank everybody in the team for such an excellent strategy that allowed us to win from 24th on the grid. In the end we only had to stay out of trouble and do the job and that is what we did. Unfortunately we could no longer fight for the title after a first lap incident in Le Castellet cost us too many points, but by winning our home race in Silverstone and the last race of the season here, we should be really proud."

Guy Smith (#7 M-Sport Bentley, runner-up): "As always in the Blancpain Endurance Series it was very close, very competitive. We kept the pressure on until the end and I have to admit we were a bit surprised by the McLaren. We were looking at the Nissan and the other cars around us and these guys came out of nowhere. But credit to them, they did a great race, and also to the Nissan guys. They raced us hard, as they did in Paul Ricard. It's been a good season, I like to thank everybody involved. We will have to come back next year and try to do one better."

Gabriele Gardel (#14 Emil Frey Racing Jaguar, Pro-Am Cup winner): "This is the result of four years of hard work, pushing, developing, and lots of late hours to try and find solutions. The team never give up and this race was the result of all that. There is not just one particular point that explains this result. This Series is so competitive that you have to be perfect everywhere."

Matt Griffin (#51 Pro-Am Cup champion): "Fortunately we already were sure of the title after Spa, because this was a very difficult weekend for us. The team did an excellent job of getting the car ready after the crash on Saturday. But it was a brilliant year for us, whatever happened here this weekend."

Ian Loggie (Am Cup drivers champion): "It was probably the most nerve-wracking race of the season. Spa was tough, but we got the necessary points to bring us here with a shot at the title. But is was very tough to get result to complete the job."

Julian Westwood (Am Cup drivers champion): "There was a quite a lot of pressure, because the situation before the race meant that the title was ours to lose. I was a little bit cautious in the opening laps, but when Ian hopped in all was looking good. But when the Ferrari came back on us in the last couple of laps, I mistakenly thought it was a Pro class car, and it wasn't. So we ended up with only one point difference, but we still took the title."