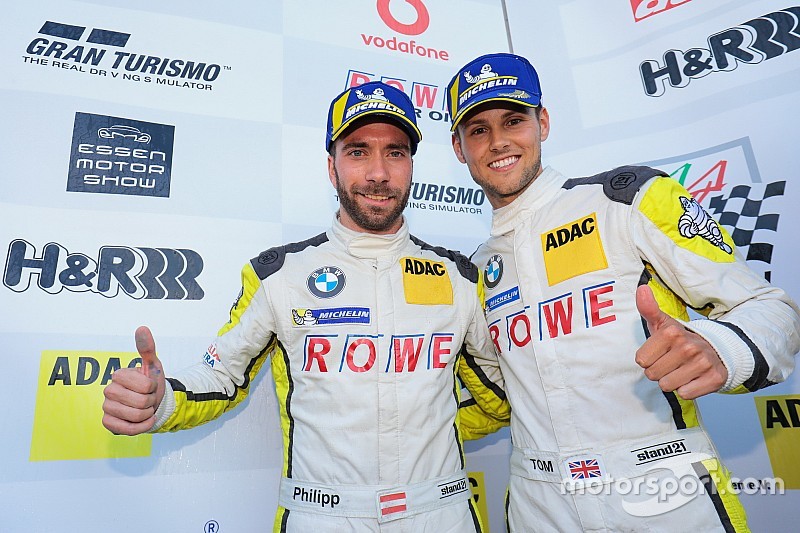 Spa 24 Hours winners Tom Blomqvist and Philipp Eng will join the factory BMW Rowe squad in a bid for the Blancpain GT Series Endurance Cup title at the Barcelona finale.

The two BMW works drivers will each race one of the pair of Rowe Racing entries in Barcelona on September 30 after their victory with the Walkenhorst team at Spa in July put them in contention for the championship.

Their score from Spa, which included points won at the six and 12-hour marks, has propelled them to third in the championship, just five points behind championship leader Raffaele Marciello.

Blomqvist will drive the #98 Rowe BMW M6 GT3 with Nicky Catsburg and Jens Klingmann, while Eng will team up with Alexander Sims and Jesse Krohn in the #99 car.

Blomqvist told Motorsport.com: "Barcelona wasn't originally on my programme for this season.

"But the result at Spa has given us a realistic chance to fight for the championship — that's why we are going."

Blomqvist is making his second Endurance Cup appearance of the season with Rowe after notching up no points with 11th place at Paul Ricard in June.

He finished sixth on the road together with Catsburg and Klingmann before a time penalty for a safety-car infraction dropped the car outside the top 10.

Eng, who contested four of the five BGTS enduros with Rowe last year, was making his seasonal debut in the series at Spa following his promotion to BMW's DTM squad.

Blomqvist is unsure about his chances at Barcelona.

"Historically it hasn't been a good track for the BMW," he said. "But it has been resurfaced and it's now less abrasive and has more grip than before, which can only be beneficial for us.

"The disappointing thing is that without the penalty at Ricard, I'd be leading the championship.

"There was a bit of a mix-up as the last safety car came in and I went too early."

Dominik Baumann has retained his place with the R-Motorsport Aston Martin squad after being drafted into its line-up in place of Alex Brundle for Spa.

He is again teamed with factory driver Maxime Martin and Marvin Kirchhofer in the #62 Aston Martin V12 Vantage.

Oliver Rowland makes his second BGTS start of the season with the factory-backed Strakka Mercedes squad alongside Christian Vietoris and Felipe Fraga.

Auto Sport Promotion Mercedes racer Marciello has the chance to make history in Barcelona by becoming the first driver to win all the three BGTS titles outright in one season.

The Italian sealed the BGTS Sprint Cup with Michael Meadows at Nurburgring last weekend and leads the overall standings as well the Endurance Cup points heading into the series finale.

Second place in the Endurance Cup points is held by the Black Falcon Mercedes line-up of Yelmer Buurman, Maro Engel and Luca Stolz.