The Blancpain Endurance Series returns from the 24 Hours of Spa-Francorchamps to the equally-challenging Nürburgring for the fifth round of the 2012 season.

Rossi will share a Kessel Racing Ferrari 458 Italia which will sport the famous No.46. 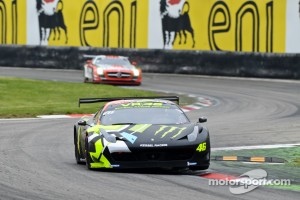 There is class warfare on several fronts in the 2012 series. In PRO-AM, the championship combat is particularly intense.

Leading the drivers’ standings is the AF Corse Ferrari pair of Niek Hommerson (NLD) and Louis Machiels (BEL) on 99 points.

The AF Corse pair are being hard-pressed by the Italian trio Eugenio Amos, Giacomo Petrobelli, Alessandro Bonacini, just three points behind in the Vita4One Italy Ferrari.

SOFREV ASP team boss Jerome Policand knows perfectly the German track. “To be quick in Nurburgring you need a good turn-in as most of the corners are low-mid speed range. But the real challenging corner is the fast chicane after the hairpin. You need commitment to make the gap.

“Our aim with the No.20 car of Ludovic Badey, Jean-Luc Beaubelique and Patrice Goueslard is to finish on the podium. As a driver I will share the 458 Ferrari with Gabriel Balthazard and Maurice Ricci. The team is currently second in the standings so we still have a chance to win.”

Meanwhile, Matteo Bobbi, Vita4One Team Italy, team principal, is intent on taking the PRO-AM championship contest to the wire. "We are in the title fight. We will face the last two races of the season with the greatest determination to be crowned champions in PRO-AM,” he said.

Marc A. Hayek, President & CEO of Blancpain, in the Blancpain Reiter Lamborghini LP600+ alongside Dutchman Peter Kox, is relishing the return to racing after an eventful Total 24 Hours of Spa where they finished a heroic sixth in PRO-AM.

“After the 24 hours of Spa and our excellent result, I am looking forward to returning behind the wheel. My feeling with the car was great during this last race and I trust to feel the same sensations or even better during this next round in Nürburgring. This race track is mythical and I always enjoyed driving here. “he said.

The Marc VDS BMW No.3 of Belgians Bas Leinders and Maxime Martin and Finland’s Markus Palttala were imperious in the wet in winning the opening two races of the season at Monza and Silverstone. The trio lead the drivers’ standings with 99 points.

However, Stephane Ortelli (MON), with German pair Christopher Haase and Christopher Mies, halted the BMW’s charge at Paul Ricard with a win and finished a strong second at Spa and have closed to within 15 points of their fellow-Belgian outfit.

Ortelli believes the Audi R8 LMS ultra will be suited to the Nürburgring. “It’s a track with very low grip, it is also a circuit where gaps are generally extremely narrow, and finally, the weather, always unpredictable and changing,” he said. “The championship battle is very open.”

Franchitti, who returns to a GT car, having competed at Le Mans in the Nissan Delta Wing car, said: “The Blancpain Endurance Series is so competitive. I’m looking forward to working with Nico and especially Seiji. Any time you get to drive with a Le Mans 24 Hour winner is a real treat.

The championship battle in the Gentlemen Trophy class is tight with four different winners so far this season.

Sainteloc Racing’s Pierre Hirschi (CHE) is tied with American Robert Hissom on 76 points at the head of the table with the Swedes Jocke Mangs, Jan Brunstedt and Mikael Bender, winners at Silverstone in the JB Motorsport Audi, second on 62.

Sainteloc and JB Motorsport are separated by six points in the teams’ classification.

It will be a feast of GT action at Nürburgring with the event schedule also featuring the FIA GT1 World Championship and the championship decider in the FIA GT3 European Championship.

The track action will include the Lamborghini Blancpain Super Trofeo with two 50-minute races during the weekend.

Blancpain, Swiss watch manufacturer, is the title sponsor and official timekeeper with commercial and technical support for the series comes in the shape of Michelin as the official tyre supplier and Audi as the official car supplier. Hexis, a long-time supporter of the SRO Motorsports Group, is an official partner.

Kessel Racing on the Nürburgring for the 5th race in the Blancpain GT Endurance Series.