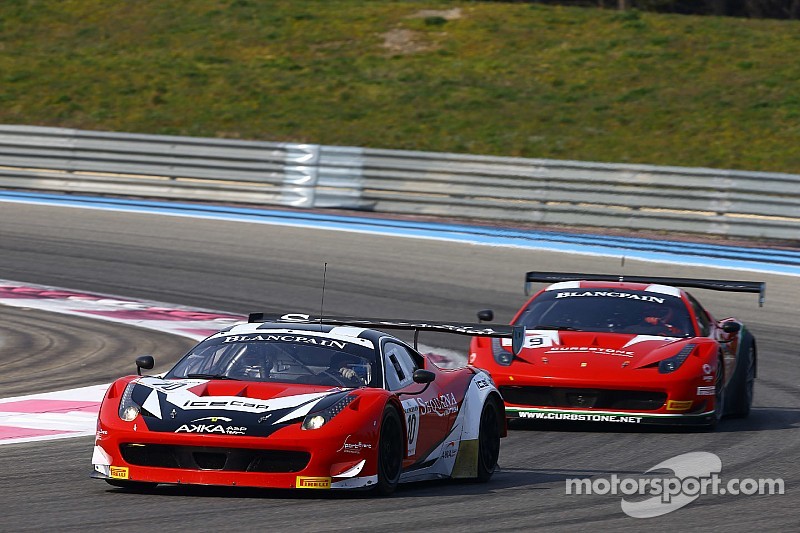 The Blancpain Endurance Series is testing at Paul Ricard this week, and Peter Kox found himself at the top of the charts after day one.

Peter Kox set the best time of 1m56.018s early this morning on just his fourth lap. Set in cool and settled conditions, it was a time that would not be beaten in the warmer afternoon session and was a full second clear of the Kessel Racing Ferrari 458 Italia. Last year’s pole position at the third round of the BES was a 1m57.198s lap set by Alvaro Parente in an ART GP run McLaren MP14/12.

Lots of competition at the top

There were six different manufacturers in the top six at Ricard with the Team Oman Aston Martin third, the Nissan GT Academy car fourth, the new Von Ryan McLaren fifth and the ISR Audi in sixth place with works Audi pilot Marco Bonanomi at the wheel.

The new-look Audi R8 LMS was a surprise addition to today’s running with reigning BES champion Laurens Vanthoor setting a best time of 1m58.767s as the car continues its development ahead of a competitive debut at May’s Nurburgring 24 Hours.

The highest placed Bentley Continental today was the #84 HTP entered car in 12th place. 45 cars set times at the track today. There were three stoppages during the afternoon session. The most significant being that caused when Rinat Salikhov crashed the Rinaldi Racing entered Ferrari 458 Italia.

The annual Balance of Performance test was conducted yesterday at Paul Ricard with Christophe Bouchut and Jean-Marc Gounon carrying out independent testing of the various GT3 cars.

Quaife-Hobbs to race McLaren in BES