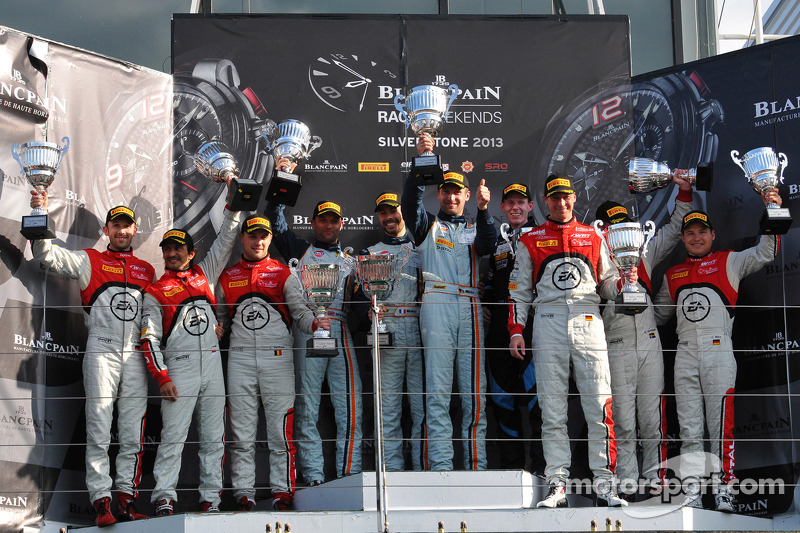 Darren Turner, Frédéric Makowiecki and Stefan Mucke took a conclusive victory in the second round of the Blancpain Endurance Series today for Aston Martin Racing, after an action packed race at Silverstone featuring a massive field of 57 GT3 supercars.

It was a well-judged victory after intense battles throughout the three-hour race where the AMR Aston Martin Vantage GT3 benefitted from slick pit work, excellent fuel consumption and brilliant management in traffic to beat the #1 Belgian Audi Club Team WRT of Stephane Ortelli, Laurens Vanthoor and Rene Rast.

Turner snatched the lead from Lucas Ordonez midway through the first stint of the race with an opportunistic move, after the Spaniard was baulked lapping slower car. Turner, who is the first British driver to win a Blancpain Endurance Series race overall, set up his team mates Frédéric Makowiecki and Stefan Mucke for a famous home win for the Banbury based constructor. To top-off the special weekend for Aston Martin they completed the race in a neat ‘James Bond’ themed 3hrs01:36.007!

It was a successful weekend for the Belgian Audi Club Team WRT squad as they took a healthy points haul away from Silverstone. Stéphane Ortelli, Laurens Vanthoor and Rene Rast took a fine runners-up position for the reigning champion team, securing 18-points. Christopher Mies, Frank Stippler and Edward Sandström brought the #13 Audi R8 LMS ultra home 3rd despite suffering in the latter stages of their stints with tyre pick-up problems.

In PRO-AM the silverware went to class pole sitters and overall front row starters, Nissan GT Academy Team RJN and their Nissan GT-R Nismo GT3 driven by Lucas Ordonez/Peter Pyzera and Alex Buncombe. After leading overall in the early stages of the race, the Nissan eventually finished well ahead of their class rivals and also sealed 10th place overall after a stellar weekend. Peter Pyzera became the GT Academy’s latest International winner with an impressive stint, after moving in to the #35 entry only this weekend.

Second place in the PRO-AM class was the Barwell Motorsport team with their Aston Martin Vantage. The British GT regulars used local knowledge to the full, sealing a well-earned runners-up position in the ultra-competitive class. Mark Poole, Richard Abra and Joe Osborne each impressed on their home turf, further enhancing both their own reputation and also that of the burgeoning British GT Championship.

Completing the top-three in PRO-AM was the TDS Racing BMW Z4 of Henry Hassid and Ludovic Badey. The all-French team drove a stunning race after an early puncture meant they were forced in to an epic comeback drive. They took 2nd place in the last 10-minutes, overtaking the Grasser Racing Lamborghini LP560 to complete a brilliant recovery and to take the lead in the PRO-AM class point’s standings.

Victory in the Gentlemen’s Trophy class went to the ARC Bratislava Porsche 997 GT3 R. An impressive race from Oman’s only professional racing driver – Ahmad Al Harthy, ensured the country has now been firmly put on to the international sporting map. Along with his Slovakian team mate Miro Konopka (who visited a GT podium for the first time in 9 years), Al Harthy completed two impressive stints to take a richly deserved class win, despite a nervous moment when he was forced on to the grass at Woodcote with just 20-minutes left of the race to run.

Runners-up at Silverstone in the Gentlemen Trophy class today were Maurice Ricci, Gabriel Balthazard and Jerome Policand in the #10 SOFREV ASP Ferrari 458 Italia. The experienced all-French trio snatched the position right at the end of the race from the pole-sitting Aston Martin Vantage GT3 of PGF-Kinfaun, driven by Aston Martin Racing Managing Director, John Gaw.

PGF-Kinfaun’s third place in class ensured that Aston Martin was represented in each of the three classes at Silverstone. It was a fitting end to a fantastic weekend for the marque that celebrates its centenary year in 2013.

57 GT3 cars took part in an unforgettable first race of the new season at Silverstone with nine brands of GT3 supercar taking part in the second Blancpain Endurance Series round of 2013, reflecting the truly global attraction to the GT3 boom.

The next round on the Blancpain Endurance Series schedule is at Paul Ricard in France on the weekend of 29/30 June, where another varied and exciting grid of the world’s most spectacular GT cars will gather to re-engage battles throughout the field.

“Today, it was the first time we would do a full stint on a tank so we wanted to make sure it lasted. It was hard to keep up with Lucas (Ordonez) for the first ten laps because he was very fast. Then we started to get through the traffic but sometimes it was in his favour and sometimes in mine. A good job has been done this weekend, especially the people from the workshop back at the factory, and also to everyone who helped to put this race weekend together.”

“For us it was a good race, I was really delighted by the fights we had, especially with our sister car. I have to thank all the team at WRT who all did a very good job again; I am very pleased about the result.”

“At the start, I was missing some power so I got stuck a little. By the time I managed to get through, the Nissan was already far away. But it is a good race for WRT because we are both on the podium and the third car is in the top 10 as well, even if I am not 100% happy because we have two other cars are in front of us.”

“For me, it is always fantastic to drive a race car. I am always thinking about half a year ago when I was sitting on a train station and playing games. When I am in a racing car, competing with the fastest drivers thanks to the GT Academy and Nissan, I am very proud of myself and of my team and I want to continue like this for the next races.”

“We were not really sure what to expect as it was our first race in the Blancpain Endurance Series but we had a great car even if we could not really compete with the Nissan at the end of the day. The drivers were quite like pros, so it was very good to compete but we are delighted with the result.”

“ It is amazing to be on the podium today because we had to change our tyre after 5 laps and we were then in 55th position! But then, I brought the car back to 'Ludo' in 25th position, even if I don’t remember overtaking so many cars! So yes, this is beautiful for us and it is a race we will not forget too soon!”

“What a weekend! It feels so special to be here on the top step of the podium at Silverstone where I have raced so much in my career. I have lots of guests and friends here this weekend so it is extra special. The race was fantastic despite a real scare at Woodcote when I was on the grass and heading for the barrier in the late stages. But we got there and it is a fantastic result for the whole team.”

“The race was really good. I had a great fight in the end, even if it was tough because of the traffic but I really enjoyed it! Obviously, this is fantastic weekend for Aston Martin as we came here this weekend to try and have a podium in all three classes and finally we are first in PRO, second in PRO AM and third in Gentlemen so it is terrific."