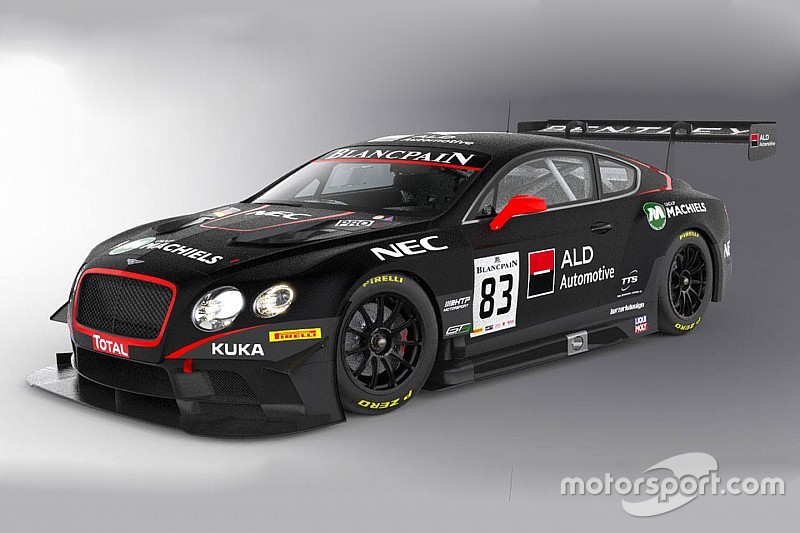 It’s one of the highlights in worldwide GT racing and one of the most important races for Bentley Team HTP: At the 24 hours of Spa, the premier GT endurance race, Bentley Team HTP competes with a pair of Continental GT3 in two classes. The two Bentleys feature a new look in Belgium and sport the black and red of team partner ALD Automotive.

Vincent Abril (MC), Harold Primat (CH) and Mike Parisy (F) will compete in the red #84 Bentley in the Pro class, while the black #83 Continental GT3 for Bentley HTP juniors Fabian Hamprecht (D) and Clemens Schmid (A), Max Splunteren (NL) and Louis Machiels (B) is entered in the Pro Am class.

Bentley Team HTP is in strong form after the recent maiden victory in the Sprint Series in Moscow and now wants more success at Spa, where the team took the overall victory two years ago. Spa will be the second 24-hour race for Bentley Team HTP, after the team scored a great top-ten finished in their first 24-hour enduro at the Nürburgring.

For the biggest GT race in the world with a tough opposition of almost 60 competitors, Bentley Team HTP has strengthened its driver line-up. Two-time Endurance Series Pro-Am Champion and 24 hours Spa class winner Louis Machiels will share one Continental GT3 with Hamprecht, Schmid and van Splunteren, who made his Bentley race debut in Moscow earlier this month.

“It’s great to have a experienced driver like Louis onboard for Spa“, Bentley Team HTP team principal Norbert Brückner says. "The competition in the top class at Spa gets stronger each year, but we recently showed a great performance at Le Castellet and the 24h Nürburgring proved that we have a great endurance car. We have a strong driver line up and I hope we will be able to fight for the podium in both classes until the final hour.”

The 24 hours of Spa start Saturday, 25th July at 16:30 hours. A live stream is available at www.blancpain-gt-series.com, while Eurosport will broadcast parts of the race live.

Vincent Abril: "Spa will be my first 24-hour race, so I'm very excited. The competition has as never been stronger at Spa, it’s a big challenge for the team and the drivers. I’m quite confident for the race. At the pre-test the car felt good and it’s very comfortable to race over a long distance. In the endurance rounds earlier this season luck was not on our side, thus our premier goal is to finish the race. If we make it to the chequered flag, I’m sure we will achieve a good result as the last races showed that we have the pace.“

Clemens Schmid: "It would be great if can make it into the Super Pole Qualifying session. It’s not vital for a 24-hour race, but it would be nice to put he car through its paces in one flying lap. Our strategy for the race has to be the same as for Nürburgring: If we have a trouble free race and avoid penalties, we will have a fair chance to fight for a top-five-finish. It will be important to stay out of trouble in the first quarter of the race, as in recent years the first few hours at Spa were always pretty busy with incidents.“

Max van Splunteren: “It's cool to start at the 24 hours of Spa with Bentley Team HTP, it will be my first 24-hour race and therefore something very special. In various tests and during the Sprint Series race in Moscow I already gained experience with the Bentley. The car is great to drive, especially in the fast corners in Spa where it's great fun. The Bentley generates a lot of downforce, which is something completely new for me. It would be great to fight for the podium, but in the first place, the aim is to finish the race. If we succeed, I hope we will have a good result.“

A word from... Markus Winkelhock

Triple Eight aiming for points in 24 Hours of Spa debut