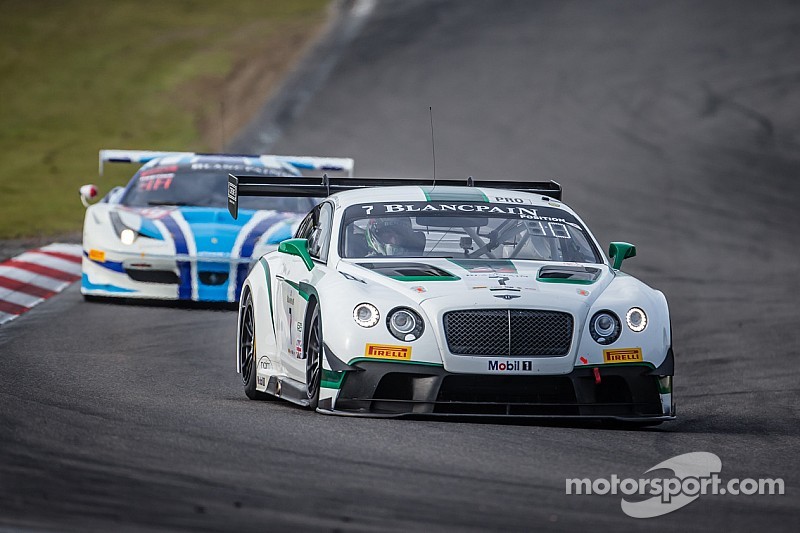 Crewe, Bentley Motorsport and technical partner M-Sport celebrate the conclusion of the 2014 Blancpain Endurance Series by securing second place in both the Team and Drivers Championships with a strong performance in very tough conditions at the iRacing.com Nürburgring 1000 km.

Battling through torrential rain to finish 8th and 12th overall,  and 5th and 7th in class, the performance of the Continental GT3s and their drivers resulted in two championship runner-up results in the team and car’s debut season.

The team have given us a fantastic race car this year and I’m so happy that we could give them something in return.

Starting the race weekend in joint second in the Teams Championship and third in the Drivers, the team knew that they would have to fight hard to improve their standing. The challenge was made harder by torrential rain for the first four hours of the six-hour race, which saw the Bentleys slip back from their starting positions but then recover well as the track dried.

Bentley’s Member of the Board for Engineering, Rolf Frech, comments: “I am delighted that we fought so hard today and scored two great championship results. The weather made it very difficult for us, but the drivers and mechanics did an outstanding job and the championship silverware is the right reward for their hard work over the season. For us to finish second in our debut season, with a brand new car, is an achievement that I am very proud of. On behalf of the team, I’d like to congratulate Belgian Audi Club Team WRT and Laurens Vanthoor for their impressive win today and their victory in the championship. Hopefully we can be back to resume the fight next year!”

With two wins over the course of the season, including an historic win at Silverstone, the home of British motorsport, the team of Guy Smith, Andy Meyrick and Steven Kane in the #7 Continental GT3 were in contention for the title but ultimately were delighted to be runners-up with the new car.

Guy Smith comments: “Finishing so well in the championship feels fantastic, but we were really made to work for it today. My two-hour stint at the start was one of the toughest I’ve ever driven – the track was soaked, everyone was struggling for grip and we didn’t have the perfect setup. However, we managed to stay in contention and Andy and Steven drove great stints to score us the vital 12 points for fifth in class. The result for the Team Championship is definitely the most satisfying – the team have given us a fantastic race car this year and I’m so happy that we could give them something in return.”

Bentley Boy Andy Meyrick drove the second stint while the rain continued to fall, and reflects: “We knew today would be difficult, but the conditions on the track exceeded even those expectations. Guy did a great job keeping us in the top ten before he handed the car to me, and while I was happy enough with my speed on track I had a spin and a really unfortunate drive-through penalty which hampered my progress. As with every race though, we got great strategy from the pit wall we recovered really well, and the reward is two championship trophies.”

Steven Kane finished the race for #7 team, with an on-track pass in the last 30 minutes that proved vital: “I was lucky enough to get to drive the car on a drying track, and at the mid-point of my stint we made the call to switch to slicks. The car was instantly one of the fastest on the track, and I could push hard to chase down the Triple Eight car that was ahead of me. It was only after I got past him that the team told that it was his fifth-in-class place that we needed to secure second place in the championship! It’s been a phenomenal season and I’m looking forward to celebrating.”

Bentley Motorsport now starts its preparation for the 2015 season, details of which will be announced in due course.

2014 Blancpain Endurance Series proves to be a Grand Cru