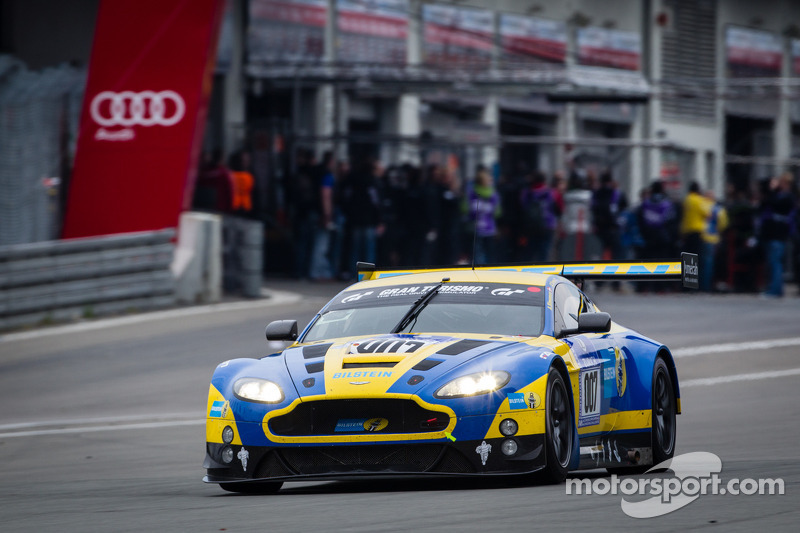 In the PRO-AM class pole position was sealed by Alex Buncombe for the Nissan GT Academy Team RJN team.

Aston Martin Racing will start from pole position for the second round of the 2013 Blancpain Endurance Series at Silverstone later this afternoon. During an intense and ultra-competitive three-part qualifying session held in warm and sunny conditions, Frédéric Makowiecki set a best lap of 2m01.140s to claim the top spot.

The Frenchman, who shares the Aston Martin Vantage GT3 with Darren Turner and Stefan Mucke, set the blistering lap in the second of the 15-minute sections and it was good enough not to be beaten in the final session.

Joining the Aston Martin on the front row of the grid in the PRO class will be the Belgian Audi Club Team WRT Audi R8 LMS ultra of Edward Sandstrom/Frank Stippler and Christopher Mies. It was the rapid Stippler who set the fastest time of 2m01.340s in the final 15-minute session.

Third place and making it three different brands in the top three positions was the Ferrari 458 Italia of the Russian SMP Racing team. Alessandro Pier Guidi was just two hundredths of a second away from Stippler on a 2m01.360s.

In the PRO-AM class pole position was sealed by Alex Buncombe for the Nissan GT Academy Team RJN team. Further enhancing a growing international reputation, Buncombe took the Nissan GT-R Nismo GT3 to a superb 2m01.186s lap, claiming second place overall and just 0.046s away from a sensational home pole for the British based team and driver.

Second place in PRO-AM was the PRO-GT by Almeras Porsche 997 GT3 R driven by Franck Perera who achieved a best lap of 2m01.525s, while rounding out the top three in PRO-AM was the Black Falcon Mercedes SLS AMG with another local driver showing a brilliant turn of speed. Adam Christodoulou registered a best of 2m01.697s and has set the German team up nicely for this afternoon’s race. Klaas Hummel and Steve Jans join Christodoulou in the front engined Mercedes GT3.

Incidents in qualifying included a spin and contact with the barriers for the #15 Boutsen-Ginion McLaren MP4-12C. The well-drilled Belgian team now face a race against time to ready the car for the race this afternoon.

The ever popular and expanding Gentlemen Trophy class sees the PGK Kinfaun AMR team taking class pole. Achieving a best time of 2m02.824s was John Gaw, who will share the Aston Martin Vantage GT3 with team mate Phil Dryburgh this afternoon. Lining up in 2nd and 3rd places in Gentlemen Trophy will a pair of SOFREV ASP Ferraris. Team boss Jerome Policand set a best of 2m03.011s to just beat the sister SOFREV Ferrari driven by Patrice Gouselard.

With 57 Blancpain Endurance Series GT3 cars scheduled to start the three hour race this afternoon a feast of supercar action is all set to hit the famous Silverstone circuit.

Frédéric Makowiecki, Aston Martin Racing, Aston Martin Vantage GT3 (PRO): “It feels great because it is a home race for us and we are very happy to get the pole with the Aston Martin. The car is really nice. This feels very good because the level of the series is really high, so I am really looking forward to the race!”

Alex Buncombe, Nissan GT Academy Team RJN, Nissan GT-R Nismo GT3 (PRO-AM): “I am delighted to be second on the grid and P1 in the Pro Am category. The fantastic did a fantastic job on the car, my engineer found the set ups and they seem to work fine. The car is different than at Monza so we need to get used to the car but I managed to do one really good lap in the end. We have a long race this afternoon, we know that anyything can happen but we will try to do good pit stop and see how it goes.”

John Gaw, PGF Kinfaun AMR, Aston Martin Vantage GT3 (Gentlemen Trophy): “Alex and Nissan spoiled the party, I was a bit angry (jokingly)! We tried to be the fastest in each category but we could not in PRO AM. We were in Silverstone last weekend so we are a bit advantaged and that is great because the Aston Martin suits the circuit. I think Blancpain Endurance Series is one of the most important international championships and I mean almost 60 cars on the grid is fantastic, all GT3 cars of course, with some fantastic teams and drivers line-ups. It is also terrific to see such a beautiful weather in Silverstone for a change, so I think this is going to be a terrific race.”