Concern raises within the Belgian Audi Club Team WRT ahead of the most important race of the Blancpain Endurance Series, the Total 24 Hours of Spa.

There were gloomy faces in the box of the Belgian Audi Club Team WRT on Saturday evening after the 3-hour race of the Blancpain Endurance Series at the Circuit Paul Ricard. The Audis R8 LMS ultra of the Belgian squad were never in contention for the top positions in the third round of the championship, as they were outpaced by cars benefitting of a more favorable Balance of Performance. Seventh in the overall results, the #3 of Stippler-Nash-Mies took the points of the 6th place in the Pro Cup, while car #1 of Basseng-Ramos-Vanthoor had to satisfy itself with P13 overall and 8th in the Pro Cup, after a qualifying session ruined by a red flag at the wrong time.

Sixth in the Gentlemen Trophy, Kelders-Blanchemain-Hirschi had as a consolation the fact of being the best Audi in the class, while Frenchmen Teneketzian-Pourquie-Chaix finished not-classified after losing much time because of a gearbox failure. Concern raises within the Belgian Audi Club Team WRT ahead of the most important race of the Blancpain Endurance Series, the Total 24 Hours of Spa whose test day will take place on Wednesday. 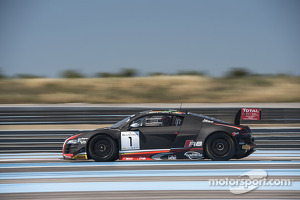 Vincent Vosse was not in the best mood after the Paul Ricard race. “ We feel extremely frustrated and how could it be otherwise? ”, admitted the Belgian Audi Club Team WRT Team Principal. “ The team has done a fantastic job and the drivers have performed a faultless race. Still, everybody could see that no Audi was ever in a position to claim success here. It’s interesting to see that Edward Sandström, on the Saintéloc team’s Audi, who had done a good qualifying, was literally left behind on the straights by the top competitors in the initial laps. We are not fighting on an equal footing!

Sporting Director Pierre Dieudonné tried to analyze things from a distance, and his conclusion is clear: “ Since the inception of the Blancpain Endurance Series in 2011, the Audis have conquered only one pole position and three wins : two at the Spa 24 Hours and one at the Paul Ricard, resulting from a successful strategic bet. In reality, despite our high-level driver line-ups, impeccable pit stops where our crews were again the fastest, we have lived a very frustrating race day. Very clearly, it seems that not all the cars are competing in the same class.

The Bentleys and the McLarens are way above the rest, the Ferraris and the BMWs are fast but less well driven, and we are behind them all. We find ourselves in the same situation as last year before the 24 Hours of Spa. Then, it was evident to everyone that the Balance of Performance was not suiting at all our R8s LMS ultra and it’s again the case this year. We feel bitter and worried ahead the longest race of the year…”

After qualifying 12-fastest, the trio composed of Frank Stippler, James Nash and Christopher Mies was able, thanks to a perfect race, to climb up to P7 (P6 in the Pro Cup) on the finish line. “ During qualifying, we took a slightly different approach ”, explained Christopher, a former series’ champion in 2012, “ We obviously aimed at the best possible position on the grid, but the level is so competitive that a few hundredths of a second make a big difference. About the race, what can I say? We weren’t fast enough, as simple as that. Our top speed didn’t allow us to pass less competitive cars on the straights. I don’t like to appear as fishing for excuses, but I really think the current Balance of Performance is simply not fair. It is extremely frustrating! ”

On the Audi R8 LMS ultra sporting #1, Marc Basseng, César Ramos and Laurens Vanthoor lived a black weekend. “ During qualifying, a red flag was deployed when I was on my fast lap, after putting on new tires ”, explained the Belgian. “ This is why we had to start from P21 on the grid. With our limitations in top speed, we knew it was going to be difficult to climb through the field…” The car eventually took P13 in the race and P8 in the Pro Cup.

With regard to the two cars entered in the Gentlemen Trophy, the #2 of Henry Teneketzian, Stéphane Pourquie and Grégoire Chaix lost all hopes of a good result in the early stages, following a gearbox failure. The car took the track again after repairs but could not cover the sufficient distance to be classified. On car #4, Christian Kelders, Jean-Luc Blanchemain and Pierre Hirschi experienced a challenging race, eventually concluded in P6 in their class. “ My stint, already in the dark, was not easy ”, admitted Pierre Hirschi. “ It proved very difficult on this track to find the reference points when the day light faded out... But we still managed to be the top Audi in the Gentlemen Trophy…”

At the end of a difficult weekend, the Belgian Audi Club Team WRT will immediately be back to work to prepare the forthcoming commitments : the Total 24 Hours of Spa test day on Wednesday and the next Blancpain Sprint Series round at Zandvoort this weekend. “ We won’t give up ”, asserts Vincent Vosse. “ That’s not part of our trademark!”

Drivers’ provisional standings after Round 3 of 5 (Pro Cup):

Drivers’ provisional standings after round 3 of 5 (Gentlemen Trophy):

Teams’ provisional standings after Round 3 of 5 (Pro Cup):

2014: An exceptional harvest for the Belgian Audi Club Team WRT