By Johan Laubscher 1. The Weekend

The eleventh and penultimate Grand-Am race weekend headed to Laguna Seca. The Fall-Line Motorsports Audi R8 GRAND-AM was entered, driven by Al Carter and Bryan Sellers. The team was also allowed to use the original 2013 specification Audi R8 LMS ultra rear diffuser, after it was cleared by the series organisers, but the car had to be fitted with penalty weight due to the change. They qualified in sixth place. &lt; The final race results will be updated once the race concludes at Laguna Seca. &gt;

The Belgian Racing Car Championship headed to Spa-Francorchamps this weekend, for the 600 km of Spa, round five of the season. PK Carsport was entered with their #7 Audi R8 LMS, with drivers Anthony Kumpen, Bert Longin and Maarten Makelberge. They qualified in third place and finished the endurance event on the podium in third as well.

The Brazilian GT Championship was at Curitiba this weekend, round five of the season. Ebrahim Motors has had a very consistent season so far this year. The #20 Ebrahim Motors Audi R8 LMS ultra is driven by Wagner Ebrahim and Fábio Ebrahim. During qualifying Wagner Ebrahim took position two on the grid for race one, followed by Fábio Ebrahim taking pole position for race two. The first race on Saturday saw the Ebrahim brothers unfortunately retiring from the event, but they were back for race two. Starting from pole they were were involved in the leading group. By the end of the race the Ebrahim Audi crossed the finish line in fourth place.

The Swedish GT Championship was at Knutstorp this weekend, the fifth and penultimate meeting of the season. The JB Motorsport Audi R8 LMS was again placed on pole position for the race. They backed up the pole by taking yet another race victory, remaining unbeaten with six victories this year. Another great result for the JB Motorsport team, with Jan Brunstedt already crowned as champion and Christer Lindholm ever closer to clinching second place in the championship.

The DMV Touring Car Challenge headed to France this weekend, hosting round seven at Dijon. RS Tuning added a second Audi R8 LMS ultra to their arsenal for the event in France. The wet races saw the RS Tuning squad achieving their best DMV TCC Audi results yet. Suzanne Weidt finished race one in sixth overall, taking third place in class 8. Her teammate Dietmar Haggenmüller repeated her success in race two, as he also scored sixth overall, again taking a third place in class for the team.

The AvD 100 Meilen held round five alongside the DMV TCC at Dijon. RS Tuning was victorious at the Red Bull Ring last time out and they again entered a single Audi R8 LMS ultra for the endurance event at Dijon. The #77 Audi R8 LMS ultra, driven by Suzanne Weidt and Dietmar Haggenmüller, qualified in seventh place overall behind the prototype cars, but they were on pole position within the GT class. They completed the endurance race by finishing in seventh position overall, taking second place in the GT class. Curbstone Track Events hosted a track day at Spa Francorchamps on Wednesday, September fourth. An Audi R8 LMS ultra was present at the event with a blue/white livery and comtoyou.com sponsorship. WRT logos were also seen on the car which was in a mixed specification: it had 2012 parts (rear-view mirrors and rear-wing), as well as the 2013 ultra exhaust layout. This was the second appearance of this Audi R8 LMS ultra, it was also seen at the Curbstone Track Events track day at Spa on August the seventh.

The SVRA was at Watkins Glen this weekend, for the Glenora Wine Cellars US Vintage Grand Prix. Two Audis were entered: the Audi R8 (#606) of Travis Engen run by GMT Racing, and an ex-Champion Racing Audi S4 Competition driven by Mike Fisher.

The Barcelona 24 Hours was held at Catalunya. There was one Audi entered this weekend, an Audi R8 V8 from Red Camel Racing. This Audi R8 is one of the private Audi R8 cars built by Creventic, called the “CR-8”.

The Midas Clubmans were back in action at Killarney in Cape Town, South Africa this weekend. Two Audis were entered: the ex-Terry Moss Racing Audi A4 of Andre Johnson and the ex-Johan Fourie Racing Audi A4 of Nieyaaz Modack. The pair made it an all-Audi front row in qualifying, with Johnson on pole ahead of Modack. Johnson won the first race ahead of Modack in fourth. Both got onto the podium in race two, with Modack second ahead of Johnson in third. Other Audi race cars were also seen in the various other categories racing on the day, including the historic racing.

The French Rallycross Championship held the Rallycross de Mayenne round this weekend. Two Audi cars were entered: the Racing Team Jagu Audi A1 driven by Yvonnick Jagu, and the ex-Jagu Audi A3 of Jimmy Terpereau.

The Ilirska Bistrica Hillclimb was held in Slovenia this weekend, part of the FIA European Hillclimb Championship. Two Audis were among the entrants: the Marko Racing Audi A4 STW of Andreas Marko and the SVC Náchod Motorsport ABT-Audi TT-R of Vláďa Vitver.

The Voitsberg Hillclimb was held in Austria this weekend. An Audi Sport quattro S1 E2 replica was among the entrants.

Two DTM stars will be competing in a Triple Eight Engineering Holden at the 2013 Bathurst 1000. The XBox One Holden will be driven by Audi factory driver, Mattias Ekström, and BMW’s Andy Priaulx. The entry is the third car for Triple Eight, with the Two Red Bull Racing entries alongside this “Xbox One Racing team” entry.

A new Audi concept car was revealed this week, a car with close ties to Audi’s motorsport heritage. Audi is celebrating the thirtieth anniversary of the original Audi Sport quattro, the short wheelbase road going homologation version of Audi’s rally cars, including the Audi Sport quattro S1 E2. The new concept car will be revealed in the metal at the 2013 International Motor Show IAA in Frankfurt.

The #1 LMS Engineering Audi TT RS was presented earlier this year, but supply problems regarding critical drive train components resulted in the team unfortunately withdrawing their initial VLN entry. Since then the team has been working very hard and they have also acquired the required parts. In recent weeks they have revealed photos and videos of their new engine. The car and engine were tested together for the first time this week, with successful dyno runs. The team also conducted a successful rollout test at the Nürburgring on Friday afternoon. LMS Engineering has developed a two litre version of the five cylinder turbo TT RS TFSI engine, allowing it to compete in the SP3T class in the VLN Championship. They have mentioned their intentions of running in the next VLN race, which will be held next weekend.

The MOMO Megatron DF1 team has presented a new livery for their Audi R8 LMS. The team missed the previous ELMS round at the Red Bull Ring, and they are also unfortunately not included on the entry list for the next ELMS round, which will be held at the Hungaroring next weekend (14-15 September).

Melbourne Performance Centre has yet another Audi customer in Australia. MPC is currently busy preparing an Audi R8 LMS for Rob Marshall, the car was also wrapped in a new livery this week. The new owner will be testing his Audi R8 LMS at Phillip Island on Wednesday.

The Istook Motorsports Audi TT RS as on display at Royal Purple Raceway on Saturday, part of a promotional event for the Honda Grand Prix of Texas. The car was also seen at the Cars &amp; Coffee event in Houston.

The ATL Automotive ABT-Audi TT-R could be seen back on track soon in Jamaica with Doug Gore. The team withdrew from recent events as a protest, after a dispute with the organising body (JRDC) regarding tire allocation rules which were changed mid-season. It has been reported that the tire issue has been resolved and that Doug Gore will be back on track at the Dover race circuit for the Heroes weekend race meeting in October.

Team Speed Car has acquired a second Audi R8 LMS for the GT-Tour. The car is an ex-ABT Sportsline Audi R8 LMS, which was used by the team in the 2011 ADAC GT Masters, where it was driven by Christer Jöns, Jens Klingmann and Luca Ludwig during the season. The car will be used by Team Speed Car at the final two French GT-Tour events of the season, at Lédenon and Paul Ricard. It was seen on track at Magny-Cours this weekend, where it originally took part in the GT-Tour free practice sessions. However, Team Speed Car's #007 Aston Martin blew its engine, thus the team used this Audi R8 LMS to replace that car for the qualifying sessions and the two races.

DTM cars were on display at Braunschweig. All three DTM brands were represented: Audi, BMW and Mercedes-Benz. The Audi RS 5 DTM on display was the Audi Sport Team ABT RS 5 DTM of Adriaen Tambay.

The #4 Audi Sport Italia Audi R8 LMS ultra was on display at the Manifestazioni Sportive event in Biassono this weekend.

Ebrahim Motors had a special logo on the front of their Audi R8 LMS ultra this weekend. The Brazilian GT Audi team had a logo honouring Audi's 1-2 victory at the FIA WEC Six Hours of São Paulo last weekend. One of the team's drivers, Fábio Ebrahim, was an Audi guest at the São Paulo event.

The majority of the French GT-Tour competitors retrofitted their Audi R8 LMS ultra cars to 2012 specification this weekend. As was the case with WRT at the most recent FIA GT Series round at the Slovakia Ring, the teams chose to take advantage of the less harsh 2012 Balance of Performance regulations, which are more favourable than the current 2013 specification BoP. Team Speed Car had its #36 car in 2012 specification at Magny-Cours this weekend, as well as Sainteloc with their #42 and #82 cars. 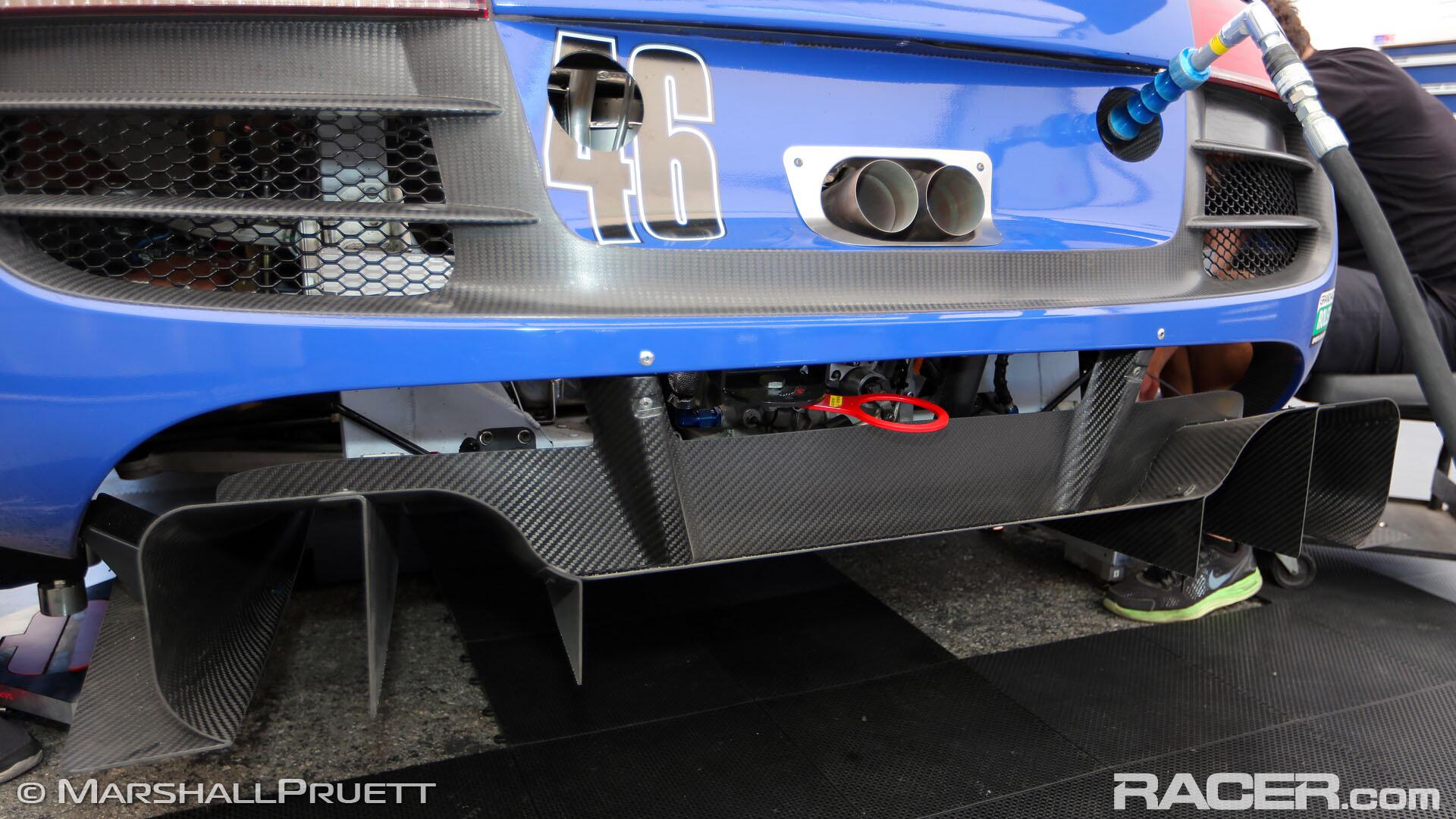 After much testing Fall-Line Motorsports found that the original 2013 Audi R8 LMS ultra rear diffuser added substantial performance and stability to the Audi R8 GRAND-AM. This is the 2013 diffuser which was eventually disallowed on the Audi R8 LMS ultra during the final FIA GT3 homologation process. The aerodynamic part was subsequently allowed by the Grand-Am organisers along with a weight penalty for the new component. The 2013 ultra rear diffuser was used on the Fall-Line Motorsports Audi R8 GRAND-AM for the first time at Laguna Seca this weekend.