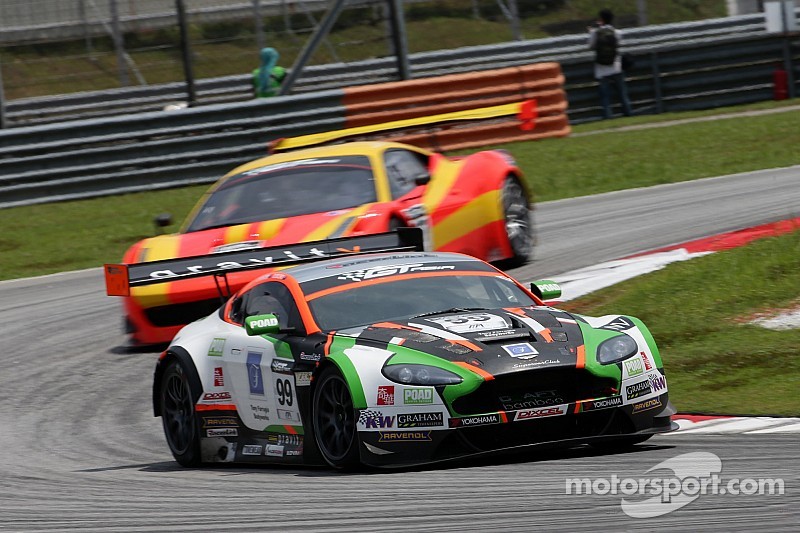 The Aussie duo were Awarded by the GT Asia Series organisers with the Best Performing Driver Award.

It was a strong performance by Craft-Bamboo Racing at Sepang International Circuit when the Australian pairing of Daniel Bilski (AUS) and Jonathan Venter (AUS) in car #99 finished round eight race in sixth and for their outstanding performance, the Aussie duo were Awarded by the GT Asia Series organisers with the Best Performing Driver Award for being the best and most consistent pair of drivers over the race weekend.

It was a tougher race for their teammates, Frank Yu (HKG) and Stefan Mücke (DEU), in car #97. After crossing the line just behind car #99, Mücke was called to meet with the Stewards and was given a 30 second time-added penalty for the incident involving him and car #11 during the race.

After yesterday morning’s shower, the weather held and it was a typical hot and humid Malaysian sunshine that greeted the drivers at the 5.54km circuit today. Bilski started the race for car #99, lining up in fifth place while Yu started the race from ninth in the #97 Aston Martin Vantage V12 GT3.

Great race from Jon, it was a shame that we lost some time, at the end we would have been one position better

Bilski got caught off and dropped down three spots to ninth before making one position back at the next lap, while Yu managed an impressive start propelling himself up to seventh as the lights turned green.

The two Craft-Bamboo Racing drivers continued in formation throughout their stint putting in consistent lap-times throughout.

At the pit-stop window, Yu came in first for the driver change, handing over the car to Mücke, but the duo had a longer pit-stop stint with the time-added due to the win yesterday, causing them to come out in 13th. From there Mücke pushed on and lap by lap, improved his position up to seventh.

“I managed a pretty good start, I gained two or three positions, but both Hamaguchi and I got held up by a Lamborghini for many laps which slowed us way down. Hamaguchi did a pretty good overtaking a couple of laps before we went in to pit but I didn’t have tyres, so I just followed him for the next few laps and just pitted” said Yu.

In the meantime, Bilski continued the race and was up to third before coming in to pass on the car to Venter. After the race, he said “overall I am really happy with the results, Jon drove an absolutely mega second stint and to hold Stefan off was just outstanding. My first session, I just got a terrible start.

I couldn’t see the green light and I missed the jump. Coming into turn one, I held the inside line but unfortunately I got boxed in by the car in front and there was a car beside and a couple of cars went around the outside and I lot a bunch of positions in turn one.

I’m very happy with the weekend, it was a good experience. It was a bit of a shame about yesterday but we just have to move past that and concentrate on the next race

“From there it was just push hard to try and get a couple of spots back but I started eating up my front tyres a little too aggressively and I had to just calm it down and get some consistent laps because it was a decently long stint.

“The team has done an immense job this weekend, I want to give a huge thank you to everyone for making me welcome into the team and the help that they are giving me” ended Bilski.

After a perfect pit-stop, Venter got the car back out in eighth, running behind Mücke. Then on lap 17, the duo caught up to the troubled Singha AAS Motorsport Porsche and at turn 14, the Porsche braked early, spun causing Mücke to brake and release fast to avoid but spun alongside him instead. Both drivers recovered but at this point, Venter overtook them for 6th.

Mücke rejoined right behind Venter and after a few short laps, began to push the Aussie. Venter remained steadfast, putting in some fast laps, maintaining his position all the way to the chequered flag.

“It was a long and hot stint. Daniel did a good job to stay where he was, bringing the car back in one piece. When I got out, I knew that Stefan would catch up quite quickly, which he did and we battled for a few laps. Then he passed in in that one lap and in the same lap he had an incident with the Porsche which allowed me to get a gap on him again. Then towards the end, he caught up with me again and it was all out battle for the last five laps.

“He definitely ‘forced’ me to really concentrate and I think in the five laps I made one mistake which allowed him to get up close to me, so yeah, he pushed me along quite a fair bit” said Venter with a laugh. He then continued, “I’m very happy with the weekend, it was a good experience. It was a bit of a shame about yesterday but we just have to move past that and concentrate on the next race”.

Mücke too had some mixed feelings about the weekend. Speaking of his race, he said “yeah after the pit-stop we had a big gap. I was catching up quite quickly to Jon, I had a bit of a hard time trying to overtake him and I think I killed my tyres a little bit. After that there was a slow Porsche coming ahead of me.

I wanted to take the inside line but he closed the door and he braked a little early, which I was not expecting, so I had to brake early as well and I lost the rear in the entry of the corner, then he spun and I unfortunately spun as well. I managed to catch up to Jon but at the end I had no chance of overtaking him as the tyres dropped off a lot.

“Great race from Jon, it was a shame that we lost some time, at the end we would have been one position better”.

Disappointment registered on Mücke’s face when he was given the penalty after the meeting with the stewards, pushing them down to 9th.

The GT Asia Series will return to Sepang International Circuit from 12-14 September 2014 for rounds nine and ten.

The GT Asia Series continues on Sunday, 17 August 2014 with race two scheduled to be held at 3pm (local time).

Craft-Bamboo Racing’s campaign in the 2014 GT Asia Series can only be made possible with the continued support of the team sponsors; Gravity Partnership, POAD, Ravenol, Racerlink, Tunewear and Vortex Racewear.

GT Asia: Sawa and Mok make it three wins for 2014 at Sepang