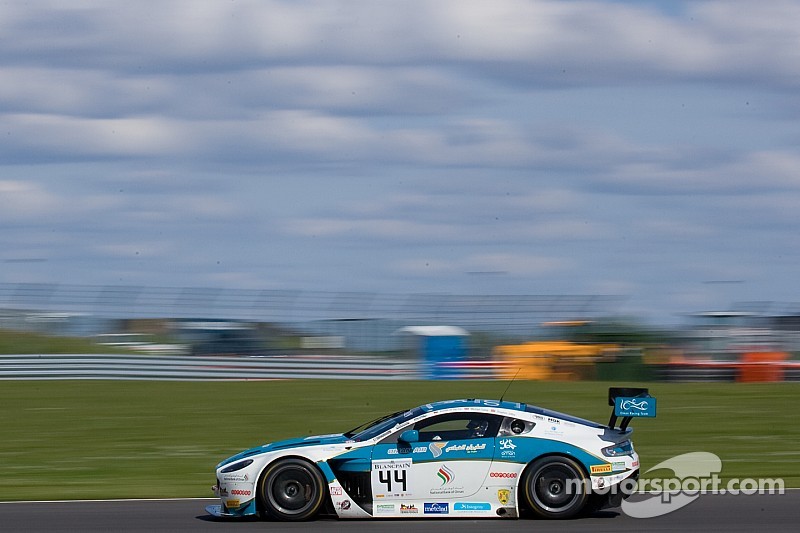 Trackspeed and Ecurie Ecosse took their second GT3 wins of the season whilst TF Sport and Beechdean AMR extended their GT4 win tallies after an exciting two races in the Spa Francorchamps round of the Avon Tyres British GT Championship.

The Trackspeed Porsche combo of Jon Minshaw and Phil Keen were victorious in the #63 car in the morning 60 minute race, which saw many teams caught out by fitting wet tyres to leave the pit lane for what turned out to be a predominantly dry circuit. Trackspeed – who changed the #63 car to dry tyres after the first formation lap – led home the Oman Racing Team Astons, with the Ahmad Al Harthy / Michael Caine car (in photo from a previous outing) taking second and the Jeff Smith / Rory Butcher car taking third.

The afternoon 6- minute race started and finished dry with pole-sitter Alexander Sims and team-mate Marco Attard taking victory to propel Attard back to the lead of the drivers’ championship and the squad to the top of the teams’ championship. Attard led home Chris Hoy, who finished on his first British GT podium, partnered by Wolfgang Reip in the Nissan GT Academy Team RJN Nissan GT-R. Third place went to the #18 FF Corse Ferrari of Gary Eastwood and Adam Carroll.

As well as returning to the lead of the drivers’ championship, Attard was also a worthy winner of the Blancpain Gentleman Trophy for his efforts over the weekend.

The first race was particularly close in the GT4 class with a lengthy battle between eventual victors Andrew Jarman and Devon Modell in the #49 TF Sport Aston and the #407 Beechdean Aston of Ross Wylie and Jake Giddings. In a crowded penultimate corner, the #407 lost P2 to the late charging #77 Lotus Evora of Oz Yusuf and Gavan Kershaw with Kershaw at the wheel, only for a post-race judgement to reverse the positions.

The second race was less contentious in GT4, with the Beechdean car taking honours from the Lotus with the #42 Century Motorsport Ginetta of Tom Oliphant and Rick Parfitt Junior taking third.

The Mobil 1 Service Centre Master of the Weekend award was given to Jake Giddings for his weekend-long strong and consistent performance in the #407 Beechdean AMR Aston.