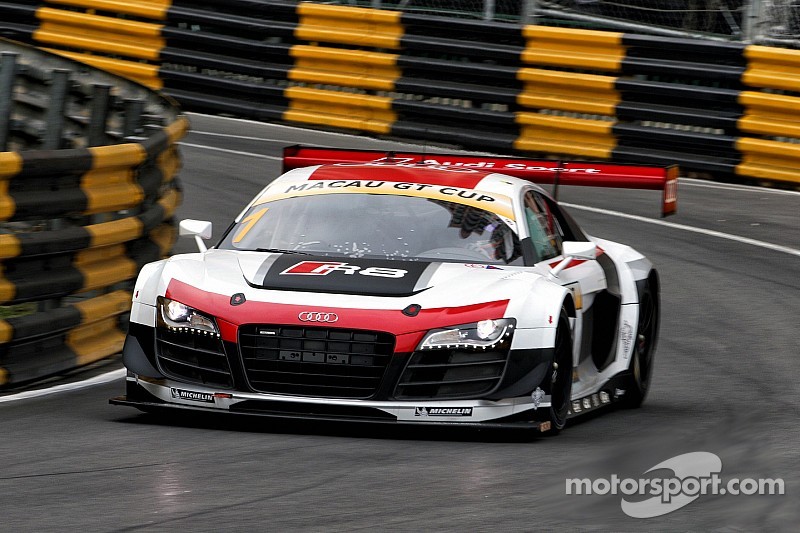 Two red flag incidents made a big impact on Q2

With the 2014 GT Asia Series title on the line, Macau delivered it’s notorious best during the second round of qualifying, after two red flag incidents made a big impact on the session. With 35-cars taking part in Q2, it was almost impossible to get a clean lap, something which ultimately forced a number of drivers to run on the ragged edge, a situation that ultimately caught out pole sitter - and title contender - Anthony Liu.

“It’s a bittersweet pole position really, but nonetheless, it still gives me an advantage,” Liu admitted. “Unfortunately today, whilst on a good lap, I scraped the wall a little bit at the wrong time, with the wrong speed, and ended up damaging the left rear suspension.

“But you know what they say.. You can’t really be fast at a track, until you’ve crashed at it..! The strategy was always to set a good foundation with the car on Thursday and Friday, then maybe take a little bit of risk on Saturday to see where I’m at, see where the car’s at, see where the circuit’s at.. Tomorrow we’ll do our best and make sure we finish the race.”

That really sucked because I hit Phillip [Ma] - and I feel really bad about that - and Jeffrey [Lee] hit me from behind, so that was that.

He wasn’t the only victim, points leader Weng Sun Mok also suffered at the hands of the Macau demons, although his contact was as the result of something quite unusual...

“Coming out of Moorish Bend I was going full on..” Mok explained. “Marshal points 18, 19 and 19A were all clear and I was coming out of Donna Maria and was about to get on the gas and all I could see was a car park in front of me.

“That really sucked because I hit Phillip [Ma] - and I feel really bad about that - and Jeffrey [Lee] hit me from behind, so that was that. I just couldn’t get going - it was basically on my first flying lap - but the car will be repaired for the race. I’m still in P2 for the GT Asia Series, so I’m looking forward to avoiding trouble tomorrow. Last year I crashed out on lap one, so I hope if there’s anything bad going to happen this weekend, this is it.. As long as I keep within the top three I’ll be alright.”

Ultimately the session was brought to a close with three minutes to go after part-time GT Asia Series driver Keith [Keng Fai] Vong came to grief at Fisherman’s Bend, his GTM class Porsche spinning into the wall bringing out a second red flag.

“I was pushing to make the qualifying cut, but clipped the wall and that broke something in the rear of the car - after that I was just a passenger,” he explained afterwards.

He also admitted that the outright cars had made a big impact on his pace by ‘backing up’ the field through the twisty part of the circuit in an effort to give themselves some ‘clean air’ to set a quick lap. He wasn’t the only one either, a number of the leading GT Asia Series regulars frustrated by the tactics of the ‘Pro’ drivers.

Ultimately few of the GT Asia Series competitors improved on their Friday times, Frank Yu one of few to make a forward step, but even then the progress was slow.

“Yesterday I had a fever and I just wasn’t on it,” Yu shrugged. “This is possibly the worst weekend I’ve had the entire season so far. Today I was feeling a bit better, but I managed to overshoot Lisboa, then I didn’t make it at the hairpin, and from that point on it was just traffic every lap. According to the data I could have had a big improvement, but I just couldn’t complete three clean sectors - every sector there were accidents, so you just couldn’t put a whole lap together.

“You had to be really careful, respect the marshals, avoid the oil - there was oil everywhere - it was a real mess. The Pro drivers too made life hard and that destroyed a couple of my quick laps. Sawa backed up when I had two green sectors - right after the hairpin - and that was that. But Macau is like this, you just have to make the best of it.”

Of the non-point scoring GT Asia Series drivers, Max Wiser was the big improver in the NB Team Aston Martin, the Italian becoming more comfortable with the car, his improvement coming in contrast to rapidly changing track conditions.

Early in the session fluid was spilled around the circuit, from Moorish Hill to the Melco Hairpin. That ultimately saw a bottleneck at the Hairpin after a group of cars stopped whilst trying to negotiate the tight right hander.

That banked the field up into Moorish Hill which started a chain of events that ultimately brought out the red flag, just ten minutes into the session.

Fortunately for all three of the GT Asia cars involved - and the BBT Ferrari of Anthony Liu - the damage was mostly superficial, although the Clearwater Racing, Spirit of Race and Absolute Racing teams will have a long night ahead of them.

In the battle for GTM class honours, Francis Tjia ultimately claimed the pole after he, Wayne Shen, new class champion Jack Yeung, and John Shen failed to improve, Tjia unsure as to why he and his Porsche stable-mates were unable to make a gain on their 2013 times.

“It’s a mystery at the moment,” the former GT Asia Series race winner admitted. “We’ve been going over the data, and there’s no real reason why we’re chasing our tails, but none of us could make an improvement.”

As 2013 pole-sitter Maro Engel had predicted, Audi claimed the pole for the 2014 running of the Macau GT Cup, although the German perhaps didn’t expect an Audi 1-2 after Laurens Vanthoor claimed the top time for the session, his 2:18.254 best just 24 one thousandths slower than Mortara’s Friday benchmark.

Mortara too got to within hundredths of his best, despite a track which was well off its prime. Few drivers managed to improve more than mere tenths, although former Macau F3 race winner Jean-Karl Vernay did make a big improvement in the Absolute Racing Bentley, improving by two seconds to claim a 12th placed start, just clear of two-time winner Keita Sawa.

Like the GT Asia Series regulars, the Macau GT Cup front runners were forced to battle the changeable track condition, the two red flags, and slower traffic, Earl Bamber one of those who was thwarted by slower cars on his first flyer - from there his chances of improving on his stunning Friday time were all but over.

With just three cars failing to make the grid, and all the cars damaged during the afternoon session repaired, 32-cars will start the 2014 running of the Macau GT Cup, and if history is any guide, expect the unexpected.. the result is by no means a ‘sure thing’!