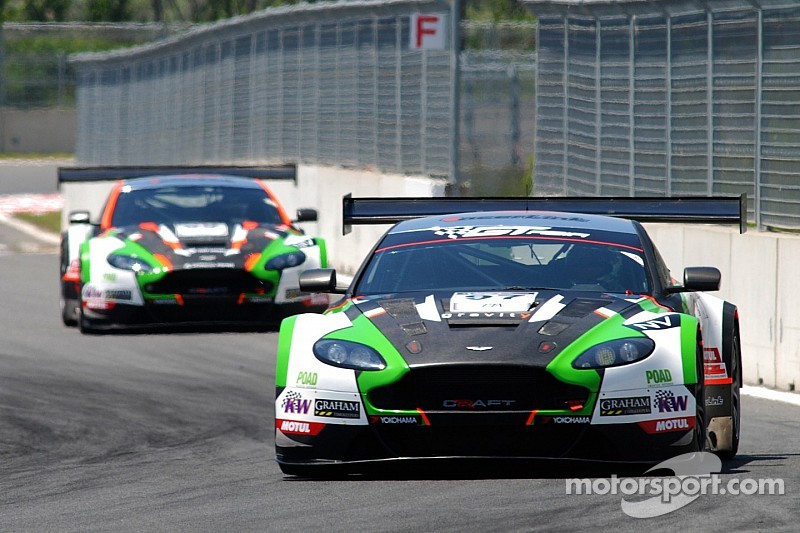 The battle for the top spot was waged between 2013 Fuji race winners Stefan Mucke and Frank Yu in the Craft-Bamboo Racing Aston Martin and Rui Aguas in the ‘Spirit of Race’ Ferrari 458.

The GT Asia Series returned to Japan for race three on the 2014 program, but whilst a number of teams had tested at the popular Fuji Speedway circuit in the weeks after the recent Autopolis round, none were quite prepared for what they’d see when they arrived for opening unofficial practice on Thursday.

In the end only half the field dared to venture onto the 4.563-kilometre 16-turn circuit after the Shizuoka Prefecture - like much of Japan - was hit by Typhoon Neoguri, providing high winds and heavy rain.

By the close of the two 90-minute practice sessions, the circuit saw only limited running, with large channels of water running across the circuit at various stages. Despite this, a number of teams, including pace-setters ‘Absolute Racing’ with Audi factory favourite Christopher Mies topping the timesheets with a best of 1:55.728 in Jeffrey Lee’s Audi R8, ventured onto the circuit to get some sighting laps - just in case!

The centre of the storm crossed the region late on Thursday night, but Friday’s first official practice session was dry, and that’s where the stars came out to play!

The battle for the top spot was waged between 2013 Fuji race winners Stefan Mucke and Frank Yu in the Craft-Bamboo Racing Aston Martin and Rui Aguas in the ‘Spirit of Race’ Ferrari 458.

In the end it was Aguas who topped the first timed session with a 1:42.490, just two one hundredths faster than Mucke. Autopolis opening race winner Keita Sawa was third, just four tenths off Aguas, with championship points leader Rob Bell fourth in the second of the Clearwater Racing cars.

Fifth was Joel Camathias, the Swiss driver now Mercedes-Benz SLS AMG mounted after a practice crash at Fuji in the break between rounds damaged the #5 NB Team Aston Martin, necessitating repairs which could not be completed ahead of this round.

Korean round winners Davide Rizzo and Anthony Liu were sixth in the BBT Ferrari 458, with Mies/Lee just hundredths behind. Max Wiser in the second NB Team car was ninth, with Takashi Hata rounding out the top ten of the GT3 class in the Team KRM Porsche GT3-R.

Despite setting the pace in the torrential conditions of Thursday’s unofficial practice sessions, GTM class pace-setter Francis Hideki Onda - returning for the first time this year - was forced to sit out much of session one after a tyre failure [debris] at over 250kmh sent him off track. Fortunately the car was relatively unscathed, but the lack of track time impacted his outright position.

“It certainly got my attention,” he admitted afterwards.

Session two again saw Aguas and Mucke battle at the top, but this time with Bathurst 12-Hour champion (alongside Darryl O’Young) Christoper Mies in the mix in the Jeffrey Lee Audi R8, Mies in the end just three tenths shy of Mucke’s best lap of 1:42.310.

Aguas was again inside the top three, with Sawa fourth ahead of the B-Max Nissan. Rizzo was sixth fastest, ahead of Tatsuya Kataoka in the Direction Racing Ferrari 458 and Takashi Hata in the Porsche.

Max Wiser was ninth again in the NB Team Aston Martin, with Craig Baird and Richard Wee rounding out the top ten in the second of the Clearwater Racing Ferrari 458s.

Teams now prepare for the two 15-minute qualifying sessions on Saturday morning (one for each driver), ahead of the opening 50-minute race at 12:15pm (JST), then race two on Sunday at 4:10pm.