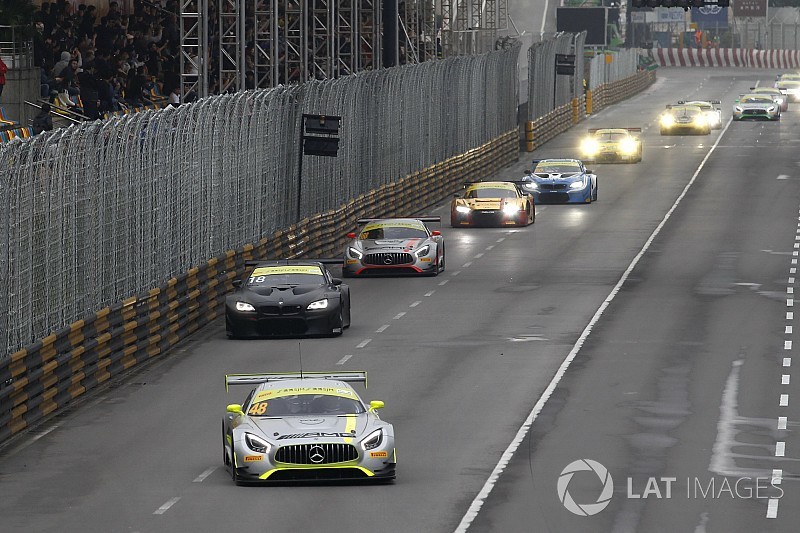 FIA GT World Cup winner Edoardo Mortara says his Macau race start strategy was "pretty stupid" after running into a barrier while trying to sprint away from Augusto Farfus.

The Mercedes driver started Sunday's race from pole after winning the qualifying race - which was suspended after a pile-up on the opening lap - a day earlier.

At the start of the main race, Mortara ran wide off the Grandstand kink and hit the barrier side-on exiting the corner, but suffered no notable damage during the impact.

The Italian said he had taken a risk to try and break away from Farfus because he was wary of the speed of the BMW on the long run to the Lisboa corner.

"I felt pretty stupid, because I had Augusto behind me and I knew the BMW was really good on the straights and in Turn 1 and 2," Mortara told Motorsport.com.

"Here, you need to know where and when to take the risks, and I think that was one of the moments where I conceded it could be very risky at the start.

"I had to at least keep a small gap to him in order for him to not attempt an attack."

The GT race was the first of the day contested on dry tyres after overnight rain.

Explaining his impact, Mortara said he had less grip through the first turn than he had anticipated.

"I went in Turn 1 and thought there was a little bit more grip than there was on track," he added.

"I've become pretty good at that over the years. Luckily nothing happened - it was a hit, but not such a big hit.

"The steering was a little bit imperfect, but the car was still behaving OK."

The win was Mortara's fourth in the GT category in Macau and sixth in total, but marked his first for Mercedes on the street circuit since switching from rival manufacturer Audi at the end of 2016.

After a difficult first DTM campaign with Mercedes, in which he scored a solitary podium, Mortara said his GT World Cup win went some way to "saving" his season.

"My DTM season wasn't great," he said. "I had a pretty good start and then in the middle I got lost with set-up.

"I knew that it was ramping up for this race, and it looked pretty promising.

"I was doing more and more races in DTM, I was being more and more competitive in GT and I knew they always had a good car here. It was very important to finish [the season], to win this race.

"It's a GT world cup and it can really save your season."