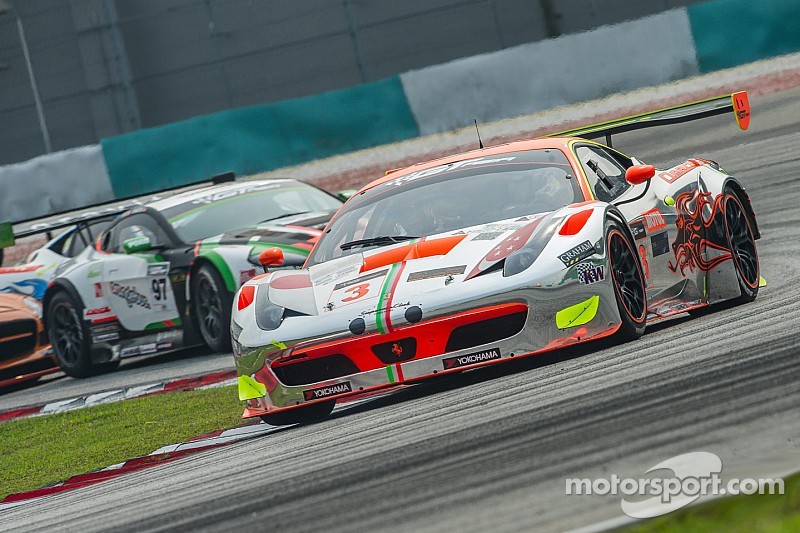 The ‘King of Sepang’ strikes again.

Dual series champion Mok Weng Sun continued on his winning way during round nine of the GT Asia Series at Sepang International Circuit in Malaysia, the ‘local’ driver winning his third straight GT event in four weeks to rightly claim the mantel as the ‘King of Sepang’.

Aided by the talented Keita Sawa, the Clearwater Racing team-boss moved to within three points of the championship lead after team-mates and points leaders Rob Bell and Hiroshi Hamaguchi labored through another difficult race to claim fourth at the flag.

In the intense heat and humidity of the Malaysian Grand Prix circuit, the twin-turbo powered McLaren MP4-12C was always going to struggle, just as it had four weeks prior, but Bell and Hamaguchi turned in a faultless race to limit the points damage and carry the lead into race two and the final race in the Malaysian capital.

The win for the #3 team was set up by Sawa’s stunning qualifying lap which gave the Japanese star the chance to start race one from the front row, immediately alongside new Clearwater recruit Alessandro Guidi who set a record-breaking pole time of 2:05.789, half a second faster than Sawa.

Guidi is no stranger to the Ferrari product, having been a former Italian GT Champion (2005 - Ferrari 430) and a part of the GTD (GT Daytona) team that won this year’s 24 Hours of Daytona in a similar 458 Italia.

He had control of the start, but it was the talented Sawa who led the field out of turn two with ‘Spirit of Race’ Ferrari star Rui Aguas up to second. Guidi held on for third with Stefan Mucke, Bjorn Wirdheim, Christopher Mies, Davide Rizzo and Naoki Yokomizo in close pursuit.

August pole-sitter Alex Yoong was the first victim, tapped into a spin by Yokomizo on Samson Chan’s Ford GT, whilst up front the three leaders made contact at turn nine, Aguas dive bombing Sawa with a brilliant late braking move. Sawa moved across to give the Portugese driver room, which opened the door for Guidi, the two Clearwater cars making contact on the run to turn ten, fortunately without significant damage.

Mucke was next through, taking Guidi for position at turn 15 which also allowed Wirdheim to attack at turn one, diving inside the Ferrari, but Guidi struck back at turn two as Yokomizo continued to make ground, jumping past Rizzo for seventh.

Behind Aguas and Sawa, Wirdheim and Guidi battled over fourth place, the MIKE Racing Mercedes Benz SLS AMG diving inside the Ferrari at turn four, the two cars running wide on the exit to start what would be an epic battle that saw a number of position changes ahead of a challenge by Guidi at the tight turn two. That saw contact between the two drivers, ultimately providing the Ferrari driver a 30-second post-race penalty.

For Wirdheim that was essentially ‘game over’ the Swede returning the gorgeous orange and black SLS to the pits with a deflating tyre, sadly they also completed their compulsory pit stop [CPS] and effected their driver change, however it was prior to the pit window opening, ultimately incurring an exclusion from the race.

Guidi wasn’t without issues either, broken bodywork started to come loose at the rear of the #12 Clearwater Ferrari, fortunately without incurring the team a further penalty.

Max Wiser was one of the first in as the CPS window opened, handing the NB Team Aston Martin to new team-mate Lucas Guerrero. Rizzo was next, followed soon after by Mucke and Guidi. That put the rapid Anthony Liu in the box seat, the Korean round winner charging hard in the BBT Ferrari 458.

Aguas was one of the last to make his stop, closely followed by Sawa who was forced to make an extended stop by virtue of the time penalty the #3 team had incurred after winning round eight in August.

Mok emerged from the pit though not too far in arrears from Nasrat Muzayyin in the ‘Spirit of Race’ Ferrari, the two-time champion quickly through to the lead which he carried all the way to the flag, although there were a few nervous moments late in the race as Liu closed to within a couple of seconds of the race lead.

The margin of victory in the end - just under five seconds. There was much celebration in the Clearwater Racing garage, the team continuing their winning streak at Sepang, although there was a note of frustration from the McLaren side, with Bell and Hamaguchi now leading the championship by just three points.

Despite a tough start to the race, the NB Team were back on the podium with Wiser and Guerrero taking the bottom step, whilst Nasrat Muzayyin held on for fifth, not too far behind Hamaguchi.

Sadly for round seven and eight round winners Ken Urata and Takuma Aoki, the GTM class leaders had a late race spin allowing former champion - and new points leader - Jacky Yeung through for the win with rivals George Chou and Thomas Fjordbach home third.

The win now closes Mok and Sawa to within serious reach of the 2014 title with just four races remaining, but don’t expect their team-mates to make their job any easier, and don’t discount the BBT Ferrari either, they’re just a few short points behind the fast approaching Clearwater Ferrari.. we’re not done yet!!

Craft-Bamboo has win taken away on a technicality