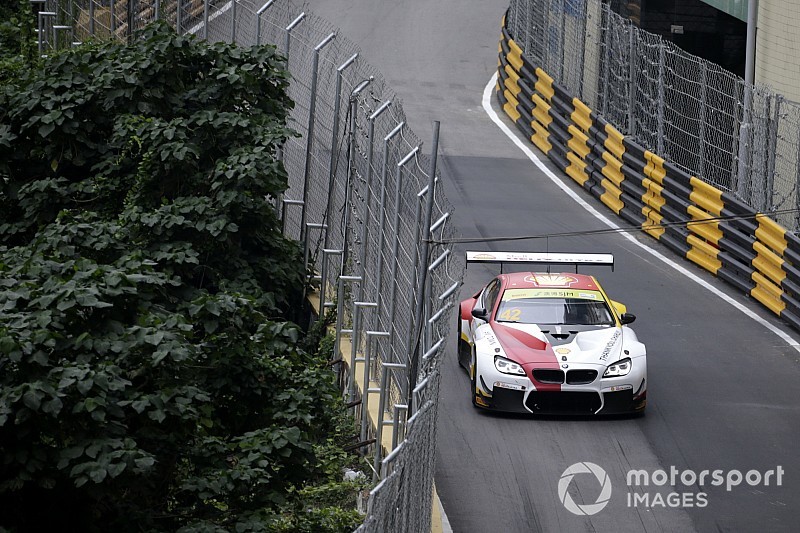 Farfus captured the lead at the start of Saturday's race, getting a run on Raffaele Marciello immediately on the rolling getaway and driving around the outside of the polesitter through the grandstand kink.

The safety car was called almost immediately when last year's winner Edoardo Mortara made contact with Laurens Vanthoor while defending on both sides from the Porsche driver and his Manthey teammate Bamber.

Mortara jinked to the right in his Mercedes-AMG GT3 in reaction to Bamber making a similar movement, with the resulting contact with Vanthoor sending the 2016 winner into the wall on the approach to the Mandarin kink and back across the track.

After one lap behind the safety car, Farfus judged the restart perfectly, spending longer than usual warming his BMW M6 GT3's tyres on the back straight before the final corner.

He then raced away from Marciello on the main straight, and established a lead of more than two and a half seconds in the three subsequent laps.

Marciello briefly threatened a comeback, setting a 2m17.989s fastest lap on lap seven, but Farfus responded immediately by going 0.4 seconds faster than the Mercedes on the next lap and was seven tenths faster on the one following that, taking back the fastest lap by 0.002s in the process.

Farfus eventually won by 3.812s and will therefore start what will be Schnitzer team boss Charly Lamm's final race at the helm from the front of the grid, ahead of a Mercedes 2-3-4.

Behind Marciello, Maro Engel converted his third place on the grid to finish in the same position, while Mortara survived his lap-one incident with Vanthoor to finish fourth - although the clash is being investigated by stewards.

Bamber closed in on Mortara in the closing laps, finishing 0.590s down in his Porsche 911 GT-3 R in fifth.

Robin Frijns was fastest of the Audi R8 LMSs but could not stick with the top five and ended up five seconds adrift of Bamber, with Christopher Haase (Rutronik Audi) separating him from fellow factory-entered WRT driver Dries Vanthoor.

Mathieu Jaminet was ninth in his Craft-Bamboo Porsche ahead of the leading Nissan GT-R NISMO of Alexandre Imperatori.