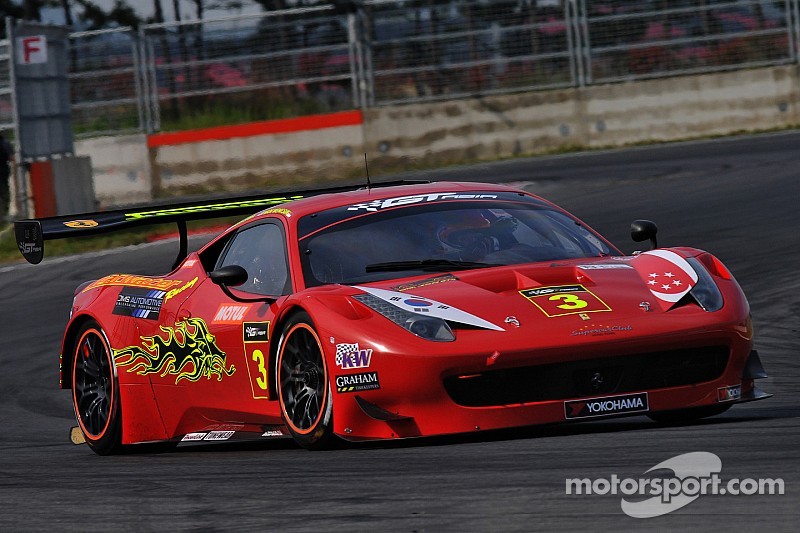 The 2013 Fuji race winner Mok Weng Sun has done it again, taking victory alongside Japanese team-mate Keita Sawa for their second win of the 2014 season in the Clearwater Racing Ferrari 458 Italia GT3 after an action-filled opening race.

Sawa had laid the foundations for victory during qualifying, with pole position in the first of the 15-minute sessions on Saturday morning, the Clearwater regular seven tenths of a second clear of the McLaren MP4-12C that Mok and Horoshi Hamaguchi took to victory 12-months ago in the capable hands of Hamaguchi’s new team-mate Rob Bell.

GTM class points leader George Chou claimed pole position in the newest of the Taiwan Top Speed Racing Ferrari 458 Challenge cars, in the process setting the 17th fastest lap time in session one, just four tenths faster than his regular co-driver Thomas Fjordbach who was running alongside Craig Liu for the Fuji event, whilst Chou was joined by Samson Chan.

Taiyou Iida was fifth in the Direction Racing Ferrari 458, with Frank Yu sixth ahead of Thailand’s Vutthikorn Inthrapuvasak, the Thailand Super Series front runner impressing in the Singha Porsche GT3-R. Eighth was 2013 Fuji race winner Jeffrey Lee in his Audi, with Kenji Nakahara (Direction Racing Ferrari) and Phillip Ma rounding out the ten.

In dry conditions after Thursday’s typhoon, the field of 32-cars rolled across the line to start the opening 60-minute race with Sawa controlling the field.

The first casualties came in turn one with Stefan Mucke (Craft-Bamboo Racing Aston Martin) forced into contact with the rear of Aguas in the fight for position, Aguas coming into pit lane with a right rear tyre failure as a result, whilst Mucke and Yu were ultimately forced to retire the #97 Aston with front end damage after 24-laps.

That, and contact further back in the field forced a Safety Car period early as officials cleared the circuit, with Sawa leading team-mate Bell and the Nissan of Katsumasa Chiyo. Sawa held Bell at bay into turn one on the restart as further back Joel Camathias took a dive under Tomonobu Fujii in the Team KRM Porsche, clipping the Japanese driver which forced the bonnet of the NB Team SLS AMG up into the windscreen and ultimately, retirement.

That delayed Baird which allowed Mies through to fourth, the Audi factory regular doing everything he could to keep the Australian at bay ahead of the compulsory pit stops [CPS]. Further back in the pack the action continued as Yoong, Fukujiro and Hideki Onda spun whilst battling for position, Onda going around twice, the first time on oil, forcing the former Fuji outright podium place-getter to have to work his way through from rear-of-field not once, but twice..

As the laps wound down Jeffrey Lee was holding on to third behind the two Clearwater cars, but he was coming under increased pressure from Anthony Liu in the BBT Ferrari, the opening round winner ultimately making his way through around the outside of the Audi into turn one.

Hamaguchi could do nothing about Mok though, the Clearwater Racing team-boss crossing the line two and a half seconds ahead of his former team-mate, with Anthony Liu another 25-seconds adrift in third. Jeffrey Lee held on for fourth, with Taiyou Iida fifth for Direction Racing.

The B-Max Nissan fell back after the CPS to eighth at the flag, whilst Vutthikorn Inthrapuvasak was ninth for the Singha AAS Motorsport Team, just ahead of Richard Wee in the second Clearwater Ferrari.

The battle for GTM honours see-sawed throughout the race after the pole-sitting Ferrari 458 Challenge of George Chou and Samson Chan was forced into retirement after contact with the NB Team Aston Martin. That left reigning champion Wayne Shen in front, the Modena Motorsports Porsche driver taking the win over new points leader Thomas Fjordbach and Craig Liu in the Taiwan Top Speed Racing Ferrari, with Jacky Yeung and Keith Vong rounding out the podium in the Tiger Racing Audi R8 LMS.

With round five now completed, the focus turns to round six on Sunday with points leaders Hiroshi Hamaguchi and Rob Bell starting from pole position in their Clearwater Racing McLaren with the BBT Ferrari of Anthony Liu and Davide Rizzo alongside.

Podium finish for Craft-Bamboo Racing on a wet Fuji Speedway