GT Asia: Lyons on top at Autopolis, but Ferrari is coming!

Craft-Bamboo Racing’s Richard Lyons continues to top the timesheets ahead of qualifying for the two 50-minute GT Asia Series races.

After two days of testing at the Autopolis International Circuit in southern Japan, Craft-Bamboo Racing’s Richard Lyons continues to top the timesheets ahead of qualifying for the two 50-minute GT Asia Series races, although with ten years of experience under his belt on the challenging circuit, it’s hardly surprising.

“I’ve driven all manner of things here over the years, so I guess I’ve got a pretty good idea about how to get around Autopolis quickly,” the Aston Martin regular admitted.

“It’s a challenging venue, and requires a compromise on setup with the big mix of low speed and high speed corners and the fast changes of direction.

“Tyre wear here is a big thing, especially the rears, but despite the 19 corners, it’s really the turn three to turn ten sector where all the tyre loading really happens. Our car is really easy on the corner-to-corner transitions, but has a bit of oversteer on hard braking, but that’s okay because it allows us to set the car up for the rest of the circuit. 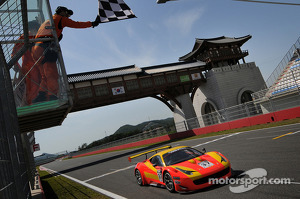 “Traffic is always a big issue here and I think we can probably expect yellow and red flags during the race, you’ve really got to judge the traffic and make the most of it. I think we could see a 47.5 in qualifying, but it will come early because the tyres will be at their peak on about the second lap, so there will be an element of luck in ensuring the circuit is clear at that point.”

Whilst Lyons took the #97 Aston to the top time, in Practice #2 it was a different name on the top of the timesheets, that of current points leaders Davide Rizzo and Anthony Liu.

“It’s a bit hard to judge who was on what tyre,” Rizzo admitted on surveying the lap times. “We’ve been concentrating hard on tyre wear and on maximising our pace on old tyres. It’s amazing to think that for two drivers that didn’t start racing until 2011, that we’re leading the points and were the quickest car in that second session.

“To be honest a lot of it is down to the car, and to AF Corse for all the assistance they provide the ‘Spirit of Race’ team. Take a look at the time sheets, both team cars are right there with the Craft Aston and the Clearwater team.

“We’ve been quick on old tyres and on new rubber, and we’re both closely matched on pace. Anthony [Liu] is very comfortable in the car and surprisingly took very little time to settle in, so we’re pretty confident for the race, even with our extra time penalty from winning in Korea.”

Whilst one side of the Craft-Bamboo pit was all smiles, the other side was hard at work on the #99 car repairing the front of the car after an off by GT-rookie Tanart Sathienthirakul in P1.

“It’s taking me a little time to get the balance and the weight of the car sorted,” he explained post-session whilst reviewing the damage to ‘the Hulk’.

“It’s very different to the F3 open-wheeler I’ve been running in Spain, and I think that caught me out. I went into turn four with understeer, which turned into snap oversteer. I thought I could catch it, but it spun me around and I grabbed the fence. I’m disappointed for the team, but fortunately, apart from missing P2, the car can be repaired.”

Experienced co-driver and Tanart’s driver coach Carlo Van Dam had set a solid pace prior to handing over to the former Formula Masters China Series star, and admitted that his main focus was on getting the 21-year old Thai as many laps as possible ahead of the two compulsory pit stop races.

Rob Bell put the Clearwater Racing McLaren on P4 after stopping the clocks in the second practice session just nine one hundredths slower than Rizzo, but the factory McLaren pilot admitted that the car wasn’t where they wanted it.

“Last year I was very comfortable in the McLaren, but the upgrades this season don’t seem to have worked as well for us, so we’ll keep working on it,” Bell’s co-driver Hiroshi Hamaguchi admitted.

“Certainly we’re improving, but there’s a fair way to go yet,” Bell added. “We’ll make a few changes ahead of qualifying and see what we can do, we’re certainly not out of the equation.”

Clearwater Racing team-mate Keita Sawa too was not 100% happy with the balance of the car, but was sure the team would unlock some speed ahead of qualifying.

With the elevation change and the fast changes of direction, you have to get the car right to get the most out of it, and whilst we’re quick, we have some work to do overnight.”

“Unfortunately he found the tyre barriers a couple of times,” Baird explained. “It hasn’t done much damage, and he’s continued to improve so the boys will check the car over tonight and we’ll attack tomorrow.”

As had been the case during Thursday’s unofficial practice sessions, tyres were the key with a number of teams ‘sand-bagging’ and not playing their ace cards too early by running used tyres or ‘roaded’ rubber. Traffic too was playing into the equation with a number of teams commenting on just how busy the circuit was.

“It’s key to get a clear lap,” Max Wiser from the NB Team admitted. “Otherwise your lap time isn’t that reflective of your real pace. We’re happy with where we are, but we’re looking for grip, the understeer is a real handful.”

Car #5 too was looking for pace, but more so laps than anything else, after Sean Fu came off the circuit and beached the Aston during session two. Team-mate Joel Camathias was quick early but only turned limited laps to allow Fu to get comfortable with the 19-turn, 4.673-kilometre circuit. “It’s great, I’m loving the Aston,” the Swiss driver admitted. “The car is very nice to drive, still not 100% where we want it, but it will be okay tomorrow.”

The GTM class in the end was led by local hero Takuma Aoki. The Japanese star - joined this weekend by Ryu Ohtsuka - were quickest in session two, but not as consistent as they would have liked, something which was giving Aoki’s rivals some hope.

“Both George [Chou] and I are turning laps that are close, yet Ryu is blisteringly fast one lap, and down on pace the next lap. Traffic is playing a part, but we’re happy with where we are. There’s two long races ahead, and we’re happy that like Korea, we’ll be right in the mix.”

Sadly for the five-car Taiwan Top Speed Racing Team, they were down one car after the Terry Fang/Nicholas Edwards car was forced to retire with a gearbox selection issue. “It will only select every second gear,” Team Manager Glavin Huang explained

“We don’t have the parts here to fix it, so we’ll have it repaired ahead of Fuji where we’re expecting to have six cars!” Teams are now prepping cars ahead of the two 15-minute qualifying sessions tomorrow morning (one for each driver), ahead of the opening 50-minute race at 3:45pm (JST).

Experience shines through in unofficial practice at Autopolis