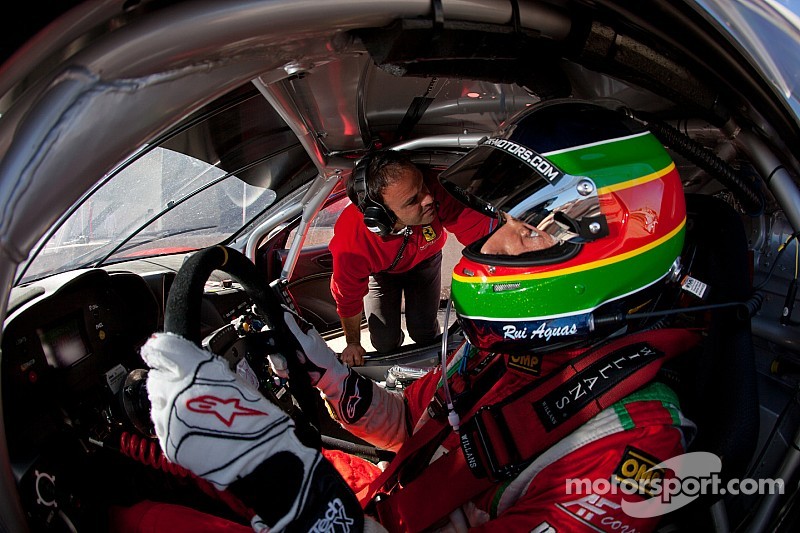 Four short weeks ago, ‘Spirit of Race’ Ferrari 458 driver Rui Aguas (in photo) dominated both official and unofficial practice ahead of rounds seven and eight of the 2014 GT Asia Series at the Sepang International Circuit, but heavy rain restricted him from dominating qualifying, so it was perhaps no surprise that the Portugese native was again fastest ahead of qualifying for rounds nine and ten at the same venue.

“I must be the luckiest man alive,” he quipped referring to the consistent run he has enjoyed at the Sepang circuit over the last four weeks. “The car works so well here, and I’m very comfortable, lets hope we get a dry run in qualifying this time so we can see how quick she really runs!”

At the close of the two 45-minute sessions, Aguas was classified quickest as a result of his P1 time, with a best of 2:06.492, faster than his quickest lap from the last time the championship visited the Malaysia Formula One venue during mid-August.

In good news for the AF Corse-run Ferrari team, stable-mate Davide Rizzo was second fastest at the conclusion of the two sessions - like Aguas going quicker in the cooler opening session, with Clearwater Racing Ferrari team-mates Keita Sawa (sharing with team-boss Mok Weng Sun) and Alessandro Guidi (subbing for Richard Wee’s absent partner Craig Baird) classified third and fourth to make it a Ferrari 1-2-3-4 whitewash at the top of the timesheets.

Round seven winners Frank Yu and Stefan Mucke were classified as the first ‘non-Ferrari’ in the Craft-Bamboo Racing Aston Martin Vantage, with the identical NB Team Aston Martin of Max Wiser and new co-driver Lucas Guerrero seventh, the two British cars split by the MIKE Racing Mercedes SLS AMG with Swede Bjorn Wirdheim at the wheel.

Wirdheim was back with the Malaysian-based team after joining them four weeks ago, where they suffered a number of minor niggling issues which kept them from showing their full potential. “This is really our first chance to run the car with everything sorted, so we’re really looking forward to the weekend,” team-boss Michael Chua admitted with a smile.

Fuji winners Jeffrey Lee and Christopher Mies were next in the Absolute Racing Audi R8 ultra, Mies providing Lee with the bulk of the track time, whilst the Samson Chan Ford GT with the impressive Naoki Yokomizo at the wheel was ninth, separating the two Absolute Audis, dropping round seven pole sitter Alex Yoong to tenth in Phillip Ma’s Audi R8.

Eleventh and twelfth were the two turbo-powered cars - the B-Max Racing Nissan GT-R of Tetsuya Tanaka and Motoyoshi Yoshida - and the Clearwater Racing McLaren MP4-12C of Rob Bell and Hiroshi Hamaguchi, the points leaders struggling once more in the oppressive Malaysian heat, two seconds off the front of the field.

“The climate here at Sepang just doesn’t suit the turbo cars,” Rob Bell lamented. “We can only do what we can do, so we’ll press on, put in the best effort we can and try to ensure we make no mistakes and maybe pick up a few positions as a result.”

With just eleven points separating the points leaders from team-mates Mok Weng Sun and Keita Sawa, and 18 points on offer for each race win, and five races remaining in the 2014 series, the result is far from a conclusion, however Bell and Hamaguchi will be keen to see the back of Malaysia, which has proved to be a happy hunting ground for their title rival and local star - Clearwater team-boss - Mok Weng Sun.

Whilst the GT3 battle will again be hotly contested for outright honours, the GTM class battle too is heating up between joint points leaders Thomas Fjordbach and former GTM class champion Jacky Yeung. With the support of former GT3 race winner Marchy Lee, the Tiger Racing Audi R8 LMS of Yeung set the early pace, whilst Fjordbach found himself in the wars early after a wheel parted company late in the session.

One GTM car absent from the top of the timesheets was the Dilango Racing Lamborghini Gallardo LP520 of Takuma Sato and Ken Urata which had dominated the Sepang round four weeks ago with two wins from two starts, the former 500cc motorcycle great struggling with car issues throughout practice forcing the team to work overnight to be ready for the two 15-minute qualifying sessions ahead of Saturday’s ninth round of the championship.

Saturday will see two 15-minute qualifying sessions begin at 10:20am to set the field for race one and two (rounds nine and ten of the Championship), with the opening 60-minute race scheduled for 3:45pm.