Dhillon and Scott in the British GT 2014 with AF Corse

Dhillon and Aaron Scott are ready to fight for the top positions.

John Dhillon and Aaron Scott continue in the British GT Championship in their AF Corse Ferrari 458 Italia. Following the positive debut in 2013 with they scored points 6 times in 10 races, now Dhillon and Scott are ready to fight for the top positions. Dhillon was one of the revelations of the Gentleman drivers and he improved hugely in the 2nd half of the season; Scott reconfirms himself one more time a very fast professional driver. 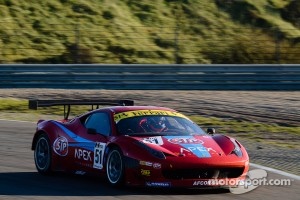 John Dhillon: “I really enjoyed my first season with AF Corse and it was an easy decision to stay with the team for 2014. I improved a lot in my driving last year and really enjoy racing in the British GT Championship. I’d like to think that Aaron and I will be able to fight for podiums from the first race next year.”

Aaron Scott: “I am really happy to be confirmed again for the British GT Championship with John and AF Corse, British GT is certainly one of the best national Championships at the moment and I am sure the standard will be just as high next season. AF Corse is a world class team and I am delighted to be racing with them again. We will work hard to improve on our results in 2014 and I am looking forward to the challenge!”

Amato Ferrari, AF Corse team principal: “The duo composed of John and Aaron was one of the best revelation in the 2013 British GT. Race by race, they improved the perfomances aiming to good positions. We are happy to continue the adventure with them: we want to take great satisfactions”.