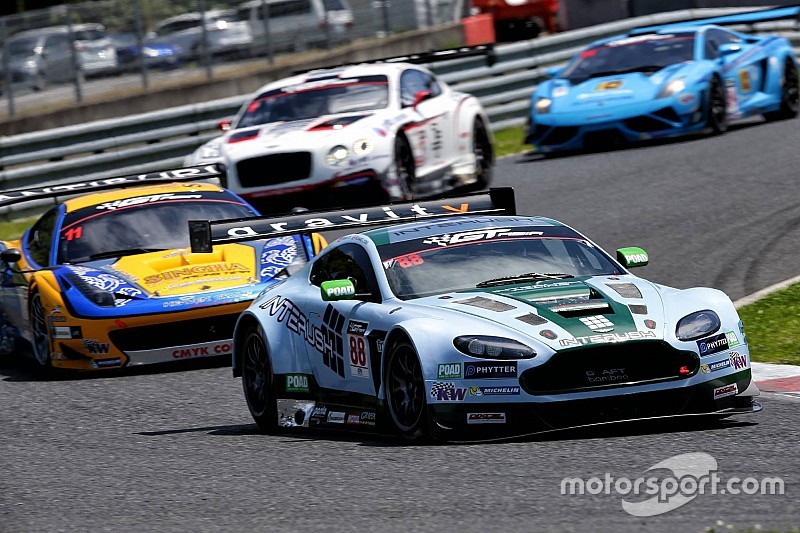 Craft-Bamboo Racing has arrived in Fuji to continue their championship charge.

The GT Asia Series is in Japan once again and Craft-Bamboo Racing has arrived in Fuji to continue their championship charge. Now at the top of the teams’ leaderboard, both the #88 and #99 cars will be fighting hard in an attempt to take the top spots in the drivers’ championship. With the Craft-Bamboo Racing drivers moving further up the standings after their success in Okayama, both cars are now firmly in the running for the title. The entire team will be focusing on collecting a consistent haul of top results to set up their second half championship challenge when the season reconvenes in September at Sepang, Malaysia.

The #99 car of Darryl O’Young and Jonathan Venter are in third place after taking home a good chunk of points from the last round in Japan. O’Young knows that a consistent gathering of points this weekend will play a huge role in their championship charge and will be necessary to get ahead given the quality of this year’s competition. Venter debuted with Craft-Bamboo Racing last year in Fuji and has continued to develop his pace and confident driving style. Already demonstrating that he has what it takes to claim the top step of the podium and with prior track time at Fuji, the young Australian will be one to look out for.

This time of year in Japan is the rainy season so we might have to find a new setup to be competitive.

Richard Lyons and Frank Yu, currently fourth in the championship, are both well prepared for this round in Fuji as they have raced here together in the past. The pair took victory in the Asian Le Mans Series back in 2013 and will be intent on repeating this success once again. Lyons has many years of experience with the circuit and will be using this knowledge to his advantage to get ahead in qualifying and to give the #88 the best start at conquering the first race. Yu is no stranger either and is confident with the Aston Martin’s abilities around Fuji. He will be perfecting his technique over the practice sessions in the hope of staying ahead of the tough GT Asia field when it comes to race day.

Richard Lyons, Driver: "I'm really looking forward to one of my home circuits (having raced there for 15 years). This time of year in Japan is the rainy season so we might have to find a new setup to be competitive. We will give it everything!"

Frank Yu, Driver: “Richard and I have won here together at Fuji during the Asian Le Mans series, so we both know the circuit and have had some success. The team has performed well here before at Fuji but the competition has taken another step up this year so it is going to be tough but I am very excited.”

Darryl O’Young, Driver: "We have a clear aim which is to keep scoring points in Fuji. We are not always the quickest car on track; therefore we have relied on consistency and strong team work to bring in the points for the championship. I enjoy Fuji a lot as it’s a great track with a lot of history, so I hope to get the setup dialed in to give our #99 VLT entry the chance to fight for the race win."

Jonathan Venter, Driver: “I am really excited to be joining Craft-Bamboo Racing again in the VLT Aston Martin at Fuji for GT Asia. The series has been tightly contested before this round with some very good racing so I am excited to see what Fuji brings. The team has been doing a great job so far this season and its great seeing the team lead the teams’ championship. Darryl and I are aiming to stay consistent and take away as many points as we can to increase our position in the standings.”

Richard Coleman, CEO of Craft-Bamboo Racing: “It is great to be leading the teams’ championship and with both the #88 Interush and #99 VLT cars so close in the drivers’ standings, this round in Fuji will be important for both cars championship aspirations. Hopefully the weather is kinder to us than last year but the team is well prepared for all scenarios and we will be focused on top results.”

Another historic moment at Okayama as Bentley takes maiden victory

GT Asia: Vilander on track at Fuji with Mok