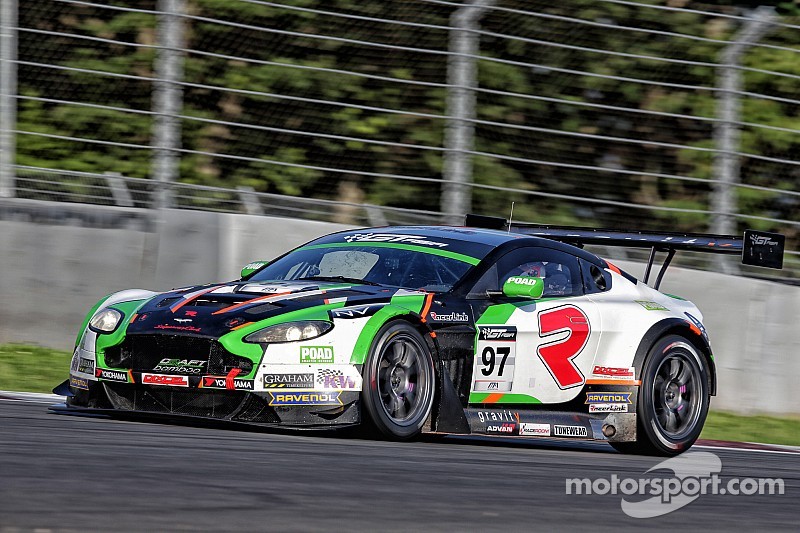 A dominant win for Stefan Mücke and Frank Yu.

Craft-Bamboo Racing wins round seven of the GT Asia Series with car #97 of Stefan Mücke (DEU) and Frank Yu (GBR) on a sizzling Sepang International Circuit.  It was a dominant win today which went trouble free for the pair that crossed the line with a margin of 6.520 seconds.

Fate wasn't the same for the #99 of Aussie duo with Jonathan Venter and Daniel Bilski when they suffered some shifting troubles just six laps into the race. The crew worked quickly and expertly to rectify the issue, allowing Bilski to continue the race, bringing the car home to the chequered flag.

The race started on a dry track with the sun coming out just half an hour before the race, after heavy rains which started in the morning. Mücke started the race for the #97 Aston Martin Vantage V12 GT3 in fifth whilst Venter was two rows behind, starting the race in ninth.

The German got off to a good start and was immediately up to third as he approached turn one and began his push from there. The Aston Martin factory driver was quickly catching up to the leading duo and by the end of the first lap, he was right behind Christopher Mies and taking second under-braking into turn one.

It was really unexpected to get a win but most of the work was done by Stefan. I am happy for the team!

From there it was just maintaining the pace and keeping the car in a good position before handing the car over to Yu during the pit-stop session. After the driver change, car #97 was in third and Yu managed to overtake the two lead cars two laps later, for the lead, one which he held all the way to the chequered flag.

Comments Mücke “I managed to go up to P2 in the first part of the race. Actually we improved the car balance a lot and we were able to keep second position, the Ferrari was about the same pace as us but we kept the same position. The guys did a great job at the pit-stop and Frank did just an amazing job at the end. He moved up to P1 and held on to that position and did fast lap-times. I am really proud of Frank today, he did a perfect job, a great team effort and I would like to thank everyone on the team for a great day”.

“Stefan did a really fantastic job jumping from P5 to P2, we knew that the other teams have a little bit of a time penalty, so when I came out in P3, the other two cars were quite easy to catch, so I managed to do that in my first lap, to take the lead" said Yu after the race.

“Then in the next lap, the team told me that I have a 12 to 13 second gap so I just drove to the gap, all the way through. I was coming up to a lot of back markers in the last three laps, but nine seconds would be impossible to catch in two laps.

An obviously happy, but exhausted Yu concluded, “It was really unexpected to get a win but most of the work was done by Stefan. I am happy for the team!”

I am a little disappointed at the moment because I think we had a pretty good chance to finish in the top five with the pace and consistency that we had.

Venter was driving a very strong stint which saw the young Aussie putting in strong lap times to stay with the pack of strong experienced pros.  He managed to overtake the car of Davide Rizzo for ninth on lap four, but soon ran into shifting issues which forced him to pit the car two laps later.

“I am a little disappointed at the moment because I think we had a pretty good chance to finish in the top five with the pace and consistency that we had” said Venter after the race. “Its just disappointing when a mechanical failure gets you like that but what can you do.

“The start was pretty hard with a lot of Pro drivers around me and I did my best but in turn one I just got stuck behind an Audi and in turn four I got passed by two cars but I made that up soon after, so I was pretty happy with how it went”.

The crew worked efficiently to fix the gearbox but the precarious position of the shift compressor meant that they had to take a lot of time to change the component. After almost 15 minutes in the pit, dropping down the grid with a 10 lap gap, Bilski got in the seat to finish the race and bring the car home.  Although behind, Bilski took the opportunity to learn the car and set fast lap times throughout his run to the flag.

He said, “a very tough day unfortunately. We had a mechanical issue during Jon’s session, he was doing a great job, holding quite a good position and with the pit-stop penalties the other cars were going to have, we were looking quite good.

“Unfortunately we had a component failure in the car, which meant a very long pit-stop but the guys did a great job to switch it out in very hot and uncomfortable circumstance. But we got the car running again, which was important. Then it was just get out, get more seat time, get familiar with the car and don’t worry about the result, just run the car so that I can come back and give the guys feedback”.

Both Venter and Bilski drove a great race with consistent pace and are working with the engineers and mechanics for the race tomorrow.

Venter commented, “we are in a better position tomorrow and hope that the weather stays. We know we have got the pace, we just have to pull it all together.”

The GT Asia Series continues on Sunday, 17 August 2014 with race two scheduled to be held at 3pm (local time).

Craft-Bamboo Racing’s campaign in the 2014 GT Asia Series can only be made possible with the continued support of the team sponsors; Gravity Partnership, POAD, Ravenol, Racerlink, Tunewear and Vortex Racewear.

GT Asia: Yu and Mucke play it perfectly for strong win at Sepang