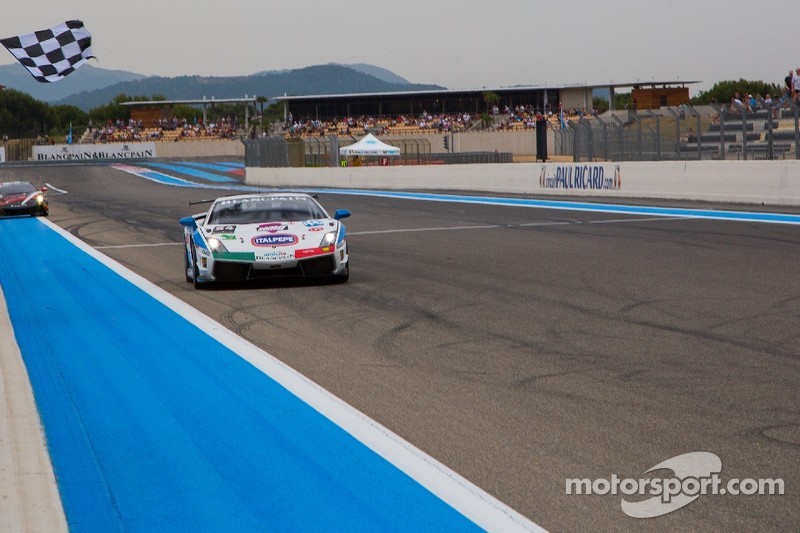 Zaugg was ruled out of the second race of the Lamborghini Blancpain Super Trofeo series this weekend with a sore neck.

01 July 2012, Paul Ricard. The Lamborghini Blancpain Super Trofeo is at Paul Ricard this weekend for rounds five and six of the 2012 European series.

Pole-sitter Amici (#54) led the field into the first corner, but the Italian had Cedric Leimer (#63) right behind him. The two leading cars stayed close to each other, but were able to pull away from the other competitors. At the same time Matteo Zucchi (#22) and Leonardo Geraci (#20) were in a big battle for third place. That battle was briefly interrupted when Geraci went wide at turn 2, but a lap later he was right behind Zucchi again and kept fighting for position until the pit stops.

As soon as the pit window opened Leimer pulled in, but on his way into the pit lane the Swiss driver crossed the white line and he was given a drive through penalty. One lap later Amici and Geraci pitted, allowing Zucchi to take the lead ahead of David Hallyday, the French pop singer, in the Automobili Lamborghini VIP Car #1. Hallyday briefly took the lead when Zucchi pitted one lap earlier. When all cars had completed their mandatory stop Amici was back in the lead, Leimer followed at 4.6 seconds.

Dimitri Enjalbert (#69) returned to the track in fourth place and set the fastest lap of the race on his first full lap after the pit stops. The French driver moved up into third place when Leimer came in to serve his penalty and the passed Geraci to take second with 17 minutes remaining. With 15 minutes remaining Amici had completed 15 laps and he was now 17.8 seconds clear of Enjalbert, who kept putting in fast lap times.

Enjalbert meanwhile pushed hard to rapidly closed the gap to Amici. The French driver was almost two seconds a lap quicker than the Italian and within just a handful of laps the gap was down from 20 seconds to just under four seconds as the cars went into the final lap.

The Touring Auto 2000 S.R.L driver did whatever he could and nearly caught the Autocarrozzeria Imperiale S.R.L car. Despite flashing lights in his rear-view mirror Amici did not succumb to this pressure and crossed the line in first place to win his second race of the weekend and to bring home an AM class overall win. Enjalbert finished just over a second behind in second place. The amateur class showed strongly today with a podium position and two cars in the top five with Laurent Jenny finishing in a strong fifth place behind the pairing of Matteo Zucchi and Alberto Cola.

Andrea Amici, #54, P1 (PRO AM)
“A second win this weekend, so naturally I am very, very pleased. I must of course thank everyone at Autocarrozzeria Imperale for doing a great job. The race started well for me, I managed to open a good gap up, but after the stops, Enjalbert was very fast and I misread the gap a little bit, so I pushed harder and we managed to hold on for the win.”

Bernard Delhez/Dimitri Enjalbert, #69, P2 (AM/PRO AM) Delhez:
“I started the race in 11th and made it to P5 at the hand over. It’s great because I am measuring myself against Dimitri of course and I have improved the gap between us to maybe 3s per lap. Thanks to Dimitri, I really believe he is the best driver in the series.”

Enjalbert: “We have progressed well since the start of the season and something has really clicked for us. Bernard’s improvement is very strong. Between us, if we hadn’t had mechanical problems yesterday, we would have been on the podium. Here we are in the middle of the championship and there are still many points on offer, so I think we are still in the game.”

Leonardo Geraci, #20, P3 (AM)
“In the first stint, I had a big battle with (Matteo) Zucchi. After the stops, Zucchi had an incident with another car, so the battle ended and I took the place. In the closing laps, Enjalbert was very quick, but a good finish for me, I’m really pleased.”

David Hallyday/Mario Fasanetto, #1, P11 (AM)
Hallyday: “Overall, a great day, I really enjoyed myself again. The start was tough as I had a bump with another car and it put the steering out of alignment, but I managed to find a good, consistent pace. Thank you to Lamborghini for all the fun this weekend.”

Fasanetto: “David handed over the car in a good position. We were carrying some steering damage - it was okay but a little tricky. On the final lap, I had an unavoidable situation with Tanca who braked a bit early than usual, so it didn’t finish perfectly, but I think David did a great job, improving every lap all weekend.”