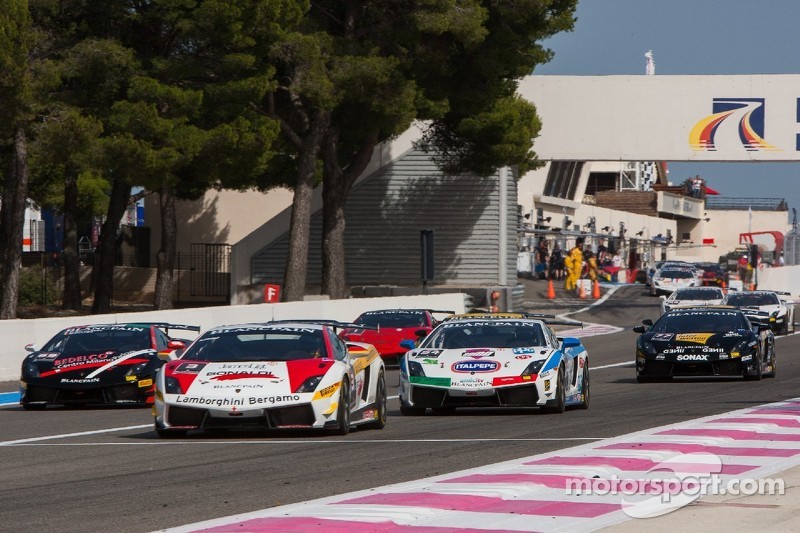 30 June 2012, Paul Ricard. The Lamborghini Blancpain Super Trofeo is at Paul Ricard this weekend for rounds five and six of the 2012 European series. Hot conditions welcomed the teams and drivers in the South of France. Qualifying and the first race of the weekend took place on Saturday.

After two pole positions for the Touring Auto 2000 team in previous rounds, it was the Bonaldi Motorsport car of South African driver Adrian Zaugg that secured pole position for today’s race. With just under 15 minutes remaining in the session, Zaugg managed to beat the lap time set by Autovitesse Garage R. Affolter’s Cédric Leimer. Leimer had taken provisional pole early in the session and then returned to the pit, saving his tyres and waiting for others to respond. When Zaugg improved Leimer’s time, the Swiss driver returned to the track, but he was unable to improve and finished the session in second place. Autocarrozzeria Imperiale S.R.L’s Andrea Amici was third, just five hundredths of a second behind Leimer.

Andrea Amici won the first race of the Lamborghini Blancpain Super Trofeo weekend at Paul Ricard this evening. The Autocarrozzeria Imperiale S.R.L. driver started the race from third on the grid in an eventful race.

At the start Adrian Zaugg (#3) was able to keep Amici (#54) behind, but before the cars got onto the Mistral straight the Italian had passed the South African to take the lead. One lap later Zaugg was back in the lead and then pulled away from Amici, Bernard Delhez (#69) and Leonardo Geraci (#20). Cedric Leimer (#63), who had started the race from the pit, was already back into ninth place after two laps.

Patrick Louis, the CEO of Lotus F1 Team, had a short-lived campaign, retiring on lap 3 after a coming-together in the early stages of the race with car #22.

Zaugg increased his lead to over 10 seconds by the time the pit window opened. Behind him Leimer, Delhez and Geraci kept fighting for third place until making their pit stops. Having started 12th on the grid, guest driver David Hallyday, the French singer/songwriter, managed to get the #1 Automobili Lamborghini car into the top five, before handing over to Mario Fasanetto.

After all teams had made their pit stops, Zaugg had a 15 second lead over Amici and Geraci, with Dimitri Enjalbert (#69) setting the fastest lap times in an attempt to catch up with the leaders. In the following laps, however, Zaugg lost time and Amici, Geraci and Leimer managed to close in on the South African. With 12 minutes remaining Leimer managed to pass Geraci for third. One lap later Geraci was back in third and when Leimer spun his car, his chances of a podium finish seemed to have gone up in smoke.

A frantic final was what followed. Zaugg was given a track limit warning, followed by the message that he was under investigation for cutting turns 8 and 9. Shortly after that message, Zaugg went off, due to suspected brake issues. Despite exiting the car unaided, he was taken to the nearby La Ciotat Hospital, suffering from suspected heat exhaustion, for precautionary checks. At almost the same time Enjalbert’s engine let go at the end of the Mistral straight, sending the French driver into a spin and out of the race.

With Zaugg now out of the race, it was Amici who inherited the lead and the Autocarrozzeria Imperiale S.R.L. driver went on to win the fifth race of the season. Geraci finished in second place overall and first in the AM category. Behind first and second a great last lap battle ended only on the finish line, with Leimer taking third place. Laurent Jenny (#67) and Mirko Zanardini (#11), both running in the Amateur category, finished within half a second of Leimer.

Andrea Amici, #54
I had a good start to the race and I concentrated on keeping a good rhythm and to maintain my focus through all of the incidents and accidents - it was a busy race with lots happening. Then on the last lap of course I took the lead when Adrian (Zaugg) had his accident.

Leonardo Geraci, #20
The race this afternoon wasn’t so good to start with, because I had an unscheduled pit stop because of some engine problems that dropped me two places, but I worked hard to retrieve the places and finishing second was a good result.

Cédric Leimer, #63
It was a dreadful start because we had an electrical problem and missed the grid, so I had to start from the pitlane. So it was pretty stressful, but we got going well and climbed right from the back to fourth place pretty quickly and we made it to the podium, so considering how it was at the beginning of the race, it was not a bad result to finish on the podium today.

David Hallyday, #1
For me, the race was pretty much about learning and trying to understand the car with Mario (Fasanetto). We had a good day, but I am sure we can be much quicker tomorrow, but I need to find the car first. So in some senses today was a little frustrating from a performance perspective, but it was nevertheless a lot of fun today out there - the Lamborghini Blancpain Super Trofeo is a great championship.