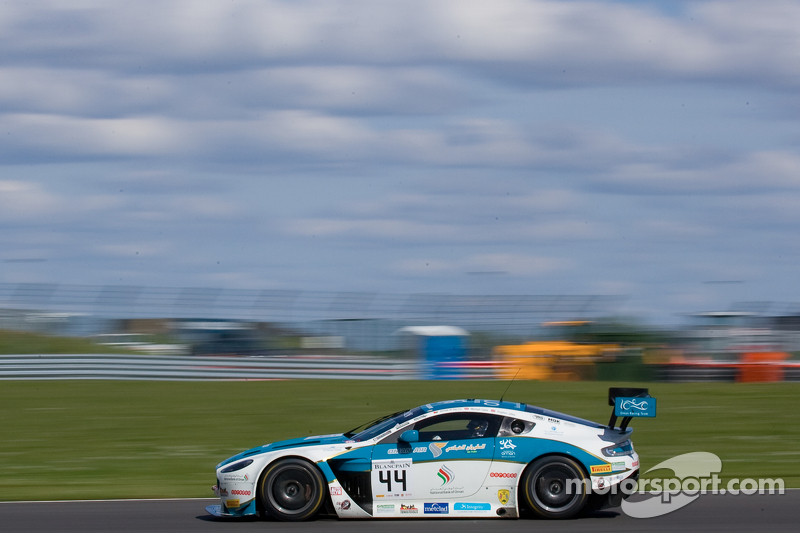 Second win of the season for Oman Racing Team

Omani sportsman Ahmad Al Harthy celebrated his, and the Oman Racing Team’s, second victory of the 2014 Avon Tyres British GT Championship on Sunday, 1st June, after an outstanding performance in the toughest race of the season – the Silverstone 500.

Delivering a supreme showing in the challenging and intense three-hour encounter, Ahmad and British team-mate Michael Caine each delivered faultless stints in the No.4 Aston Martin V12 Vantage GT3 to win by a remarkable 56 seconds.

“Of all the races in British GT, this is the one you want to win”, said Ahmad, “It’s the highlight of the year in this championship, the longest race and the toughest race. I’m so delighted with my own performance, Michael did a fantastic job and the car was incredible. To be able to win at this level you need everything to be perfect, and it was!

“I’m so proud to see the Omani flag up on the top step of the podium again, when you win you do it with everyone – the supporters, your family, friends and, of course, my amazing sponsors. We had some great support at Silverstone this weekend, to take our second win of the year is incredible.”

Qualifying fourth fastest, Ahmad took the opening stint and swiftly moved into the top two on the opening lap before happily taking the lead of the race on lap eight following a mistake from the Beechdean Aston Martin of Andrew Howard.

Running in fourth position when the action resumed, Caine quickly climbed back up the order and within the space of three laps he was into second place. Moving into the lead once again on lap 21, the Briton pressed on and built a substantial advantage before pitting around the 90 minute mark to hand the Aston Martin back to Ahmad for his second stint.

Emerging from the pits in fifth position, the Muscat 32-year-old didn’t waste any time and as the second round of stops were completed, the Oman Racing Team car was back into the lead with a very significant 40 second cushion.

Pitting on lap 66 for the final driver-change with roughly 35 minutes of the race remaining, Caine climbed from third into second and then moved back to the front with under half an hour left on the clock. Pulling clear during the final part of the race, the winning margin of almost a full minute made the success even sweeter for the Oman Racing Team.

“This is what we’re here to try and do, win races and fight for the championship”, added Ahmad, “I really can’t thank everyone at Motorbase Performance [the crew behind the Oman Racing Team] enough for doing such a fantastic job with the car. It’s been an unbelievable weekend.”

Provisionally, the Silverstone victory has enabled Ahmad and Caine to move back into the top three in the British GT Championship title race, just a couple of points shy of second place and only 4.5 points adrift of the top of the standings.

Next on the British GT calendar is a visit to Snetterton 300 Circuit in Norfolk, over the weekend 21st/22nd June, for rounds five and six of the 2014 season.

Craft-Bamboo Racing wins round four of GT Asia, but is disqualified