No. 60 Ford-Riley Michael Shank Racing entry of John Pew and Ozz Negri will start from the sixth row.

Elkhart Lake, Wis. - Once again coming to grips with a new race track in his first-ever visit, Michael Shank Racing driver Gustavo Yacaman posted a fast lap time of 2:01.658-seconds in the No. 6 Tuvacol/AERO Ford Riley at Road America to score a spot on the outside of row four for the VISITFLORIDA.com Sports Car 250 on Saturday (SPEED, 5:00 PM ET). 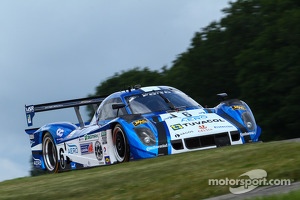 Yacaman will open the race from behind the wheel before turning the car over to co-driver Justin Wilson to take to the finish as GRAND-AM stages round nine of the 2013 championship season with an historic twin-bill Rolex Series/American Le Mans Series event.

The sister No. 60 Ford-Riley Michael Shank Racing entry of John Pew and Ozz Negri will start from the sixth row after Pew took the distinctively-liveried Ford Riley to a quick time of 2:03.262-seconds on the 4.048-mile lap that winds through the scenic Wisconsin landscape.

“Our track time is a little more limited this weekend, so I feel like if we had a little more of an opportunity to work on the car, there would be maybe a half second more to find there,” offered Pew. “We ran with less downforce this morning, and the car was a handful so it was a lot better here in qualifying.

The challenge will be to find the right balance, and still have a set up that is easy on the tires. The guys will keep working on it--we don’t have a warm up tomorrow, so we’ve got some time to come up with a final plan for the race.”

For Yacaman, the race weekend marks yet another new track that he has done his homework on to be prepared to show up ready to go from day one. But even with the effort he put in ahead of the weekend, the young Colombian racer is quick to recognize why Road America is such a revered, and relished, track by drivers through the years.

"This is a really cool race and a really special track,” said Yacaman. “It's actually one of the hardest tracks I have been to because it is so long and there are so many corners that lead into such big straights. It is hard to get a perfect lap together.

It's sort of stressful every time you enter a corner because you don't want to overshoot it because you want to get a good exit. Thankfully I have been able to do a lot of laps on the simulator on this track so I could learn about it. But it's a really enjoyable track to be at."

The last round saw Yacaman post his best qualifying performance to date as the series visited the Indianapolis Motor Speedway, and the youngster is looking to make the most out of his first ever visit to Road America on Friday.

"Tomorrow is a long race,” said Yacaman. “At this point we need to stay clean and just race. We need to attack when we can and gain positions whenever the opportunity arises and not be conservative. At this stage in the season we need to just win races and get good results."

The race will be the only on-track action of the day for the team, which scored a third place result at the track in 2012 and will look to return to the podium again this weekend.

“We aren’t where we want to be but we knew coming into the weekend that it could be an uphill battle for us,” said team owner Mike Shank. “We will just keep going over the data and come up with a plan for the race. We don’t have the speed we want, but hopefully if we can make the most of the tire run we might be able to move up.”

Pruett eager for challenge 2014 will present