Wilden teamed with Segal in the No. 61 R.Ferri/AIM Ferrari this weekend as regular team driver Max Papis is filling in for the injured Tony Stewart at the NASCAR Sprint Cup Series race in Watkins Glen.

ELKHART LAKE, Wis. –The No. 61 R.Ferri/AIM Motorsport Racing with Ferrari 458 Italia with drivers Kenny Wilden and Jeff Segal finished just off the podium in fourth place in the VisitFlorida.com Sports Car 250 at Road America, after a hard-fought effort with other GT class cars. 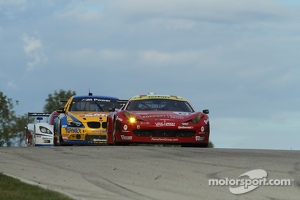 Wilden started fifth in the No. 61 R.Ferri/AIM Ferrari, almost immediately after finishing the Continental Tire Sports Car Challenge race less than an hour before the start of the GRAND-AM Rolex Sports Car Series race. Wilden got a great launch on the start to jump into third place by the end of the first lap.

“I just followed the guys in front of me down the inside of Turn 1, and I think the left lane didn’t really get going,” Wilden said. “So I followed the two guys down and away we went.”

Wilden settled into third behind a sister Ferrari F458 Italia driven by Leh Keen, and a Porsche GT3 Cup driven by Patrick Lindsey for the majority of the opening stint. Wilden ran consistent lap times either in the low 2:12 or high 2:11 range.

Excellent pit work performed by the No. 61 R.Ferri/AIM crew for four tires and fuel, with Wilden still in the car, got the Canadian out ahead of Keen and into the GT class lead 45 minutes into the two hour, 45-minute timed race.

The middle stint saw Wilden engage in a great battle with eventual GT class winner Bill Auberlen in a BMW M3. On Lap 36, Auberlen completed a move to the outside of Turn 1, but moments later Wilden returned the favor on the inside of the uphill, left-turn Turn 6 in a great slice-and-dice. Wilden handed off to Segal with one hour and 15 minutes remaining in the race. In total, Wilden led 20 laps, from Laps 21-40.

“Leh really pulled out the first few laps and I thought, ‘Geez,’” Wilden said. “After about six or seven laps you could really see the Porsche struggling in the Carousel, and also we began pulling in Leh and kept clicking times away. I got the Porsche and got close enough to Leh so on the pit stop, we beat that team out of the pits, which was awesome. I tried to put my head down from there as I knew the BMW was coming really strong.”

Segal took over and pitted again, under a yellow flag, to ensure he and the No. 61 R.Ferri/AIM team had enough fuel to make the finish. Although the varying strategies meant Segal dropped as low as seventh, he was able to fight his way back up to fourth place by the checkered flag. Segal set his fastest race lap on Lap 62 of 2:11.060, and brought the car home to secure the fourth top-five finish of 2013 for the No. 61.

“I think in terms of fuel mileage that caution helped a bit, but in terms of track position it really screwed us,” Segal said. “Our whole hope rested on long green flag runs. That helps us hang onto the rear tires longer than everybody else. So every time we had a restart, things stacked up and the cars with a bigger V8 just blew right by us on a straightaway.

To finish fourth behind the two BMWs, who had everyone more than covered, and a real fast Porsche I think is a really good day for us. It’s disappointing but it’s the best we could have done.”

“What a fantastic job by Kenny,” Ferri said. “It’s the second time he drives a Ferrari, with very little testing. He loves the car, he enjoyed it, and he did well. We could have done better, but I’m happy with fourth.”

“We hadn’t really discussed (the double stint) that closely, but he’d been fast all weekend and just hadn’t got many laps,” Segal said. “He got up to speed, as we all expected, in the race. So it made more sense to leave him in for the double at that point.”

“I think they wanted to see how I was doing and how the race was unfolding,” Wilden said. “The way it was going, it was going to be better for me to stay in.”

Wilden teamed with Segal in the No. 61 R.Ferri/AIM Ferrari this weekend as regular team driver Max Papis is filling in for the injured Tony Stewart at the NASCAR Sprint Cup Series race in Watkins Glen.

“I felt pretty comfortable and part of me gets out of the car and thinks, ‘Yeah I should be faster,’ but the car was a lot of fun to drive,” Wilden said.

Starworks continues to shine with victory for #8 at Road America