The race was a tough one for the #45 and #46 cars who ran into trouble of their own and finished 14th and 20th, respectively.

Monterey, CA - It was a wild 2.5-hour race today at Mazda Raceway Laguna Seca for the next to last round of the 2013 Continental Tires Sports Car Challenge series. 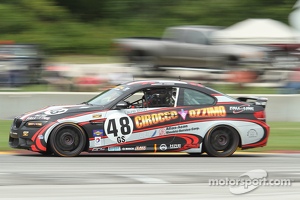 Fall-Line Motorsports had a miraculous finish with the #48 car driven by Charles Espenlaub and Trent Hindman to overcome many obstacles during the race and finish 3rd. The race was a tough one for the #45 and #46 cars who ran into trouble of their own and finished 14th and 20th, respectively.

Trent Hindman drove the #48 Cirocco Ozzimo/ Atlas Acon/ DFL Interiors/ Fall-Line Motorsports BMW in the first stint of the race after starting 14th. He made his way up to 9th before contact with another GS car which GRAND-AM deemed avoidable on the part of the competitor and issued a penalty.

Hindman still had to pit for repairs and lost valuable track time, but the upside was that the Fall-Line crew was able to keep him on the lead lap. Espenlaub got in the car at 30 mins and slowly but surely made his way into the top-10. He was running 5th when he too was driven off the track by another competitor and fell back to 9th momentarily.

Espenlaub made his way towards the front once again and was running 5th when, in the closing laps, there was a melee at the front of the pack and multiple cars went off-track. Espenlaub stood his ground and even passed two cars as he headed toward the checkered flag and grabbed the last spot on the podium.

Hugh Plumb started out the race in 7th and quickly moved up to 5th in the #45 Eagle/ B+ Foundation/ Fall-Line Motorsports BMW. He stayed out of trouble and turned the 3rd fastest lap of the race before he turned over driving duties to Al Carter after 30 mins.

Shortly into Carter's stint, he was also forced off the track by another car that damaged the #45 and broke the right front shock, which had to be repaired in pit lane. The crew only lost six laps and Carter was able to get back out there and maximize points but had to settle for P14.

The race for the #46 Trim-Tex Drywall Products/ Fall-Line Motorsports BMW was short-lived as Mark Boden started out the race in 16th position and although he made up ground in the early laps, the transmission went out and Boden was forced to pit.

Boden entered the race today in 4th in overall GS standings so the crew made the decision to change the transmission and get the #46 back out as quickly as possible. They did a fantastic job and got the car back on-track and this allowed Boden the minimum drive time needed to collect points.

Team Manager Michael Harvey: "Definitely not the kind of day we are used to, but the Fall-Line guys did amazing work today to get all three Fall-Line BMWs to the finish. With the typical 'Fall-Line never give up' approach my guys changed a gearbox and a front strut in the race to make sure we crossed the line."

A re-broadcast of the Continental Tire Sports Car Festival is available on Fox Sports 1 on Sunday, September 15 at 4p ET. Next up is the final round of the 2013 CTSCC season at Lime Rock Park on September 27.

No Luck at Laguna Seca for Starworks Motorsport