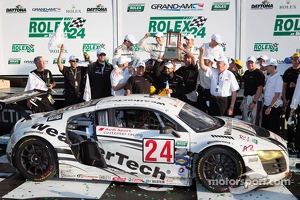 In fact, the final six hours of this year's Rolex 24 were quite eventful for the Alex Job Racing team. With nearly three and a half hours left in the race, the team had to serve a 60-second, green flag penalty for avoidable contact with another car. That judgment call nearly cost them the race. But, the team hung together to pull off what seemed like an improbable win. It was a combination of great race strategy and excellent driving that gave Audi its first Rolex 24 win, first in the GRAND-AM Series and Alex Job Racing their second Rolex 24 victory (1999).

With an hour and a half remaining, the No. 24 Audi R8 was one lap down when the caution flew on lap 633. Race strategist Greg Fordahl made the call to have Albuquerque stay out when the GT race leaders made their pit stops. After the pit stops cycled through, the No. 24 machine got the wave around, which put the team on the lead lap in seventh place. When green flag dropped, Albuquerque quickly moved to fifth.

Now in fifth and on the lead lap, it seemed possible the team had a legitimate chance to contend for the win. There were 25 laps remaining when the top three GT class cars made their final pit stops for fuel and tires. While the top three cars came in, Fordahl had Albuquerque stay out and told him to keep pushing hard. He wanted Albuquerque to build a 20-second lead that would allow the No. 24 to pit late in the race if needed.

With five laps remaining, it was clear the No. 24 WeatherTech Audi had to come get fuel in order to finish. So, that's what the team did. The WeatherTech Audi had a 41 second lead over its other team car - the No. 23 Alex Job Racing Porsche. The Audi made its final pit stop. Fordahl ordered 10 seconds worth of fuel to put in the car. At that point, the GT class leader was in NASCAR [Turn] Four. This meant that once the fuel was in the car, Albuquerque needed to beat the GT field coming out of Turn One to maintain the lead. And, he did just that. He held off two other hard charging Audis over the next four laps to capture the coveted Rolex 24 crown.

"For us the race was perfect," Albuquerque said. "It is crazy. The last three hours was crazy. We got the penalty and we didn't know why. When I got in the car, no one really believe we could win. They said 'get in the car and push like hell.' I did. I was doing qualifying laps. I didn't care about the tires, I didn't care about anything, I was just pushing. The gearbox was starting act funny, so I just kept pushing it. When we had the splash, I thought I was going to come out in the middle. When I got out ahead of them I was OK. They were battling behind me and I was able to get the win. I am still trying to realize that I won. When you are with Alex Job Racing and Audi Sport the only goal is to win. It is crazy, I can't believe it!"

Von Moltke adds a Rolex to his wrist to go along with a Sebring Twelve hour win from last March.

"I can't even put it into words right now," von Moltke said. "There have been so many great drivers and teams that have come here and tried to win this race and weren't able to do it, and I have is great. We had a great team with Alex Job Racing and the drivers. It came down to everyone doing their jobs. And we did. Two hours ago we thought we were out. Felipe got in the car and put in one of the most amazing drives I have ever witnessed. To pull it off is amazing!"

Mortara knows it was a team effort and to win his first race in America is really special.

"It is a wonderful feeling to win Daytona," Mortara said. "It is my first 24 hour race, my first 24 race with Audi and my first race in America, to win it is fantastic. I never thought it was possible, especially with two hours to go. We had some problems with the penalty, but we fought back. Filipe in the last stint did a great job. The strategy was great. Everyone on the Alex Job team did everything right and the Audi Sport customer racing guys are great as well. We are going to celebrate tonight!"

Jarvis has made a racing dream a reality with the win.

"It sounds good to be called a Rolex 24 Hour winner," Jarvis said. "I wanted to come over here and do this race for years. To win it on the first attempt is a wonderful feeling and a real dream come true. Everyone did a great job. We had some issues, but we kept pushing as a team and we won in the end. It hasn't sunk in yet. Maybe it will after a few beers tonight!"

"I am overwhelmed," Job said. "Dion raced with us at Sebring last year and we won. He was instrumental in bringing me this deal. It wasn't easy. We got a late race penalty that I didn't agree with and fought, but we had to serve it. Our strategy team was able to bring it back to the front. Audi has had an incredible record at Sebring and this will be their last year. Now, it is the first one for Audi at Daytona and I am a part of, hopefully, a long run here at Daytona. The win was a real team victory. My team, combined with the Audi Sport customer racing technical support staff, and of course a group of great drivers made it all work. The Audi clearly had the speed and it was positioned to win. Filipe had to get a 20 second gap at the end so we could bring him in and splash him. He made the gap, we delivered on pit lane and four drivers have new Rolex Daytona watches on their wrists. We will have to see what the future holds."