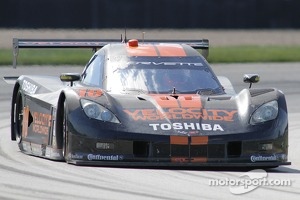 Jordan Taylor, the 22-year-old first-year co-driver with veteran Italian Max Angelelli, clocked a fast lap of 2 minutes, 0.575 seconds at 120.861 mph around the 4-mile, 14-turn Road America layout, second-best among the 27 car-and-driver combinations that will take the green flag for Saturday’s two-hour, 45-minute race.

“We’re here for the win, not the pole,” said Taylor, who qualified the Velocity Worldwide Corvette DP on the pole at three of the last four races. “I will start second, so I will have a good view at the start. We were pretty happy with the result because we were not sure what we had with our downforce strategy. The car is good and should be a strong car for the race. Dane (Cameron, polesitter) was very fast and it will be tough to run with the BMWs.”

Taylor, who co-drove to victories this season with Angelelli at Barber Motorsports Park in Birmingham in April and at Detroit, earned his first three career Daytona Prototype-class poles May 31 on the Streets of Belle Isle temporary circuit in downtown Detroit, June 14 at the Mid-Ohio Sports Car Course in Lexington, and July 25 at on the Indianapolis Motor Speedway Formula 1 road circuit. He and Angelelli also started on the pole for the Sahlen’s Six Hours of The Glen at Watkins Glen (N.Y.) International by virtue of their top position in the point standings after qualifying was rained out, per the GRAND-AM rulebook.

Dane Cameron scored his first career Daytona Prototype-class pole today by more than half a second over Taylor in the No. 42 Team Sahlen BMW Riley he shares with Wayne Nonnamaker. Its newly approved BMW engine, featuring a six-speed gearbox, won in its debut at Indianapolis two weekends ago with the new championship-leading No. 8 Starworks BMW Riley of Ryan Dalziel and Alex Popow.

Jordan Taylor puts No. 10 Corvette DP on the front row at Road America

More from
Team Sahlen
IMSA Others