Wayne Taylor Racing, Action Express Racing and Spirit of Daytona Corvette DPs finished in the top 5 at the 51st Rolex 24 at Daytona.

Daytona Beach – The Wayne Taylor Racing trio of Max Angelelli, Jordan Taylor and Ryan Hunter-Reay battled from the drop of the green flag, to the waving of the checkered flag during the 51st running of the Rolex 24 At Daytona. Their focused effort yielded a second-place finish for the No. 10 Velocity Worldwide Corvette Daytona Prototype (DP) and delivered the first-ever podium position for the Corvette DP at Daytona International Speedway. 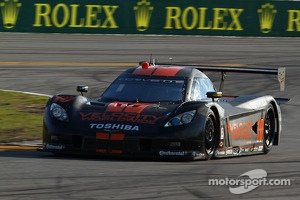 Starting 12th on the grid, Angelelli ran the first two and a half hours of the historic race to set the pace and the tone for the remainder of the longest endurance race for the GRAND-AM Rolex Sports Car Series.

“Just representing Team Chevy it’s such a big deal for me,” said Wayne Taylor, team owner. “I wanted to win so bad for Team Chevy just so much for Velocity Worldwide and everybody. I’m really happy. I’m relieved I guess you know. I was not prepared to not be the face of Team Chevy with my team. I know there are a lot of teams, but I wanted to be the one.”

Today’s finish is the first podium at Daytona for a Taylor-owned team since a third- place finish in 2007 where he and Angelelli shared the driving duties. Taylor and Angelelli also have the 2005 race win on their resumes.

"Congratulations to Wayne Taylor Racing for giving the Corvette Daytona Prototype its first podium finish in the iconic Rolex 24 At Daytona," said Jim Campbell, U.S. Vice President Performance Vehicles and Motorsports. "I am very proud of the tremendous effort put forth by all of our Chevrolet teams and applaud the "never give up" attitude of our Corvette Daytona Prototype and Camaro drivers and crews as they battled for their finishing positions this weekend. We are looking forward to an exciting 2013 GRAND-AM season."

Giving the Corvette DP three of the top-five finishers in the race were the No. 9 Action Express Racing Corvette DP driven by Joao Barbosa, Burt Frisselle and Mike Rockenfeller who finished fourth; and the No. 90 Spirit of Daytona Corvette DP with drivers Richard Westbrook, Ricky Taylor, Oliver Gavin and Antonio Garcia who crossed the finish line in fifth place.

"All of our Chevrolet Daytona Prototype and GT teams fought a great battle during this grueling race,” said Mark Kent, Director of Chevrolet Racing. “There is no other race in North America as demanding as the 24 Hours of Daytona and just finishing is an accomplishment. It was great to see the #10 Corvette Daytona Prototype finish in 2nd place and on the lead lap in a race that tests the limits of endurance for man and machine. We now turn our focus to the balance of the 2012 Grand Am season as we work to defend Chevrolet’s Daytona Prototype Engine Manufacturers Championship.”