Trinkler shows resilience to finish 12th on SCC at Daytona

Even though there were times it seemed like the finish would be low, Trinkler would fight his way to a Top-15 finish in 12th.

Altamonte Springs, FL – RSR Motorsports and P1 Groupe driver Owen Trinkler entered into the gates of Daytona International Speedway looking to start the season off with a strong finish.

The Nashville native, who is also Team Manager at RSR, has been winning in every car he has driven over his successful career.

With a young and fast co-driver in Corey Fergus with him for the year, this could be the time Trinkler captures the GRAND-AM Continental Tire Sports Car Challenge Series Street Tuner title. 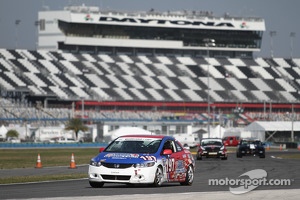 Fergus would qualify the #197 CruiseAmerica Honda Civic Si in the seventh position, and when the green flag flew around 1:45 pm local time, Trinkler watched as Fergus worked his way through the Street Tuner field.

The veteran Trinkler jumped in after his co-driver had had enough seat time to secure points. The team would go one lap down to the leaders, before gaining it back on a late caution flag.

Even though there were times it seemed like the finish would be low, Trinkler would fight his way to a Top-15 finish in 12th.

“The car was actually very good" Trinkler stated. "Corey did a great job during qualifying and his stint, giving us a chance for a good finish. We were able to claw our way back to for a twelfth-place finish, and even though it wasn't what we wanted, it is a point for us to build off of."

Check out Trinkler and RSR Motorsports, as the BMW Performance 200 will be broadcasted on February 2nd at 4:00 PM ET on SPEED. Check your local listings!