Altamonte Springs, FL – As the 2013 Grand-Am Continental Tire Sports Car Challenge Series season opener fast approaches, P1 Groupe and RSR Motorsports driver Owen Trinkler ready’s himself for what he hopes is a blistering start to the campaign. The Nashville native, who is also RSR Motorsports’ Team Manager, has been a stalwart within the organization since its inception into the series. As the racing veteran on the roster, Trinkler is certainly prepared to not only continue to live up to his strong racing reputation, but continue to mentor the other team drivers and co-driver Corey Fergus. 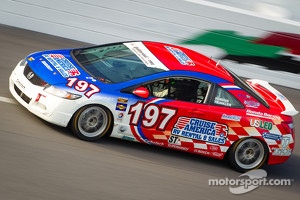 Trinkler and Fergus co-drove the #197 Honda Civic Si to a win at New Jersey Motorsports Park as well as some other Top-10 finishes. With a year together under their belt, look for the RSR duo to be contending for the win at Daytona. Every driver is looking for a fast start to the 2013 season on Friday, and Trinkler is no exception.

“We’re definitely ready to get this season underway” Trinkler stated. “Corey and I now have a year under our belt together as well as with our new Honda Civic Si so we are looking for a strong start to the season beginning Friday. We had a great test here with everyone earlier this month, and with the information we already had plus the new information, we expect to be contending right out of the gate.”

Commenting on the start of a new season Trinkler explained. “There is always a sense of angst and cautious excitement when entering a new year. Everyone is looking for a strong start, and if you can stick to your game plan and run your race, there is nothing that says we can’t be the ones on the top step of the podium at the end of it all. It’s a grind, but one we all live for!”

Trinkler and RSR Motorsports will be on track at Daytona International Speedway Friday, January 25th for their two and half hour opening event. P1 Groupe