TRG will be well-equipped heading into next month's Rolex 24 Hours at Daytona. The Kevin Buckler-led team revealed its seven-car GT attack Friday, featuring a diverse lineup that includes four Porsche factory drivers as well as a mix of veteran and ...

TRG will be well-equipped heading into next month's Rolex 24 Hours at Daytona. The Kevin Buckler-led team revealed its seven-car GT attack Friday, featuring a diverse lineup that includes four Porsche factory drivers as well as a mix of veteran and rookie pilots. Porsche will also provide support to the California-based team, which is in quest of capturing its third class victory in twice-around-the-clock marathon. 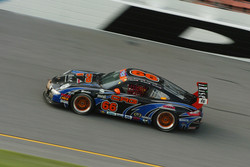 The team is no stranger to success on the Daytona high banks. In 2002, they scored a class win in 24-hour classic and backed it up the following year with an impressive overall victory. Since then, TRG has only been absent once from the GT podium.

"TRG has had an incredible streak in the last six years, and we're ready to carry that tradition into the seventh," Buckler said. "Porsche has been an incredible partner since we started this team. Their continued confidence in our operation pushes us that much harder to hold up our end of the bargain. 'Excellence is expected' is one of Porsche's mottos, and we plan to deliver."

Spearheading the driving strength in the No. 66 entry are Porsche factory aces Romain Dumas and Emmanuel Collard. The two Frenchman are joined by Bryce Miller, Ted Ballou and Andy Lally.

"I am very honored to drive the 66 at this year's race," Dumas stated. "I've lost this race before to the 66, and when you consider that this number has won the race twice, I really hope I can finally win a Rolex."

While Dumas has yet to visit victory lane at Daytona, Collard received his Rolex watch in 2005. He along with Wayne Taylor and Max Angelelli claimed the overall win in SunTrust Racing's Pontiac Riley. Later that year, Collard earned his first of two Le Mans Series titles, driving for Pescarolo Sport. In addition to competing in the LMS again in 2007, the Frenchman also tackled the FIA GT Championship in a factory-backed BMS Scuderia Italia Porsche 997 and also took part in two ALMS races in one of Penske Racing's RS Spyders.

Miller joins TRG for the full-season after a successful rookie year with Farnbacher Loles. The 2006 IMSA Cup Champion was paired with Dirk Werner for much of the season. While the German went on to claim the GT championship, Miller finished third in the standings.

"I am extremely excited to be driving alongside such a group," Miller said. "The team is focused on a championship in 2008, and I have to thank Porsche and TRG for really stepping up to help make this a realistic possibility. Daytona is the toughest race of the year, so having three extremely talented teammates to aid Ted and I will go a long way."

Partnering Miller in the No. 66 car for the entire season is Ballou. The California-native will be making his second Rolex 24 start after enjoying a successful rookie year in the KONI Challenge Series. In eleven race starts, he scored seven top-10s, five podium finishes and one win.

Lally returns to the cockpit of the No. 66 Porsche after enjoying a successful 2007 season, scoring five wins with co-driver RJ Valentine. While the 2006 GT series champion will be concentrating on a full season in TRG's new NASCAR Craftsman Truck Series program, Lally will be hoping to take part in other select Rolex Series over the course of the season.

After scoring a podium finish in last year's 24-hour, the No. 64 entry returns with a similar driver lineup to 2007. Jim Lowe, Jim Pace and newly crowned Porsche Cup Champion Johannes van Overbeek are joined this year by RJ Valentine and Tim Sugden.

"Jim Lowe and all of the guys on the 64 have been an incredible group to work with over the last two years," Buckler noted. "The 64 has quickly become one of Rolex GT's toughest competitors over the years, and it's been a real treat to have a group of their caliber under our umbrella. Jim and Jim are tough competitors and have become good friends and that makes it even more satisfying to me to help them achieve their goals."

Richard Westbrook, the third Porsche factory driver appointed to the team for the 24 Hours, heads the roster in car No. 67. The Englishman captured his second consecutive Porsche Supercup title in 2007 and also drove in a handful of endurance races for the German brand. He will be making his second Rolex 24 start after piloting a Synergy Racing Porsche last year. Spencer Pumpelly, Tim George Jr. and Bryan Sellers complete the lineup.

"Richard is undoubtedly a major addition to our team," Buckler said. "Over the years he has developed quite a reputation as one of Porsche's hottest properties, so it's great to see him join Tim, Spencer, and Bryan."

The fourth Porsche factory supported driver to join the fray is Martin Ragginger, who will pilot the No. 62 car with Jack Baldwin, Claudio Burtin, Scott Rucker and Ed Zabinski. A graduate of Formula BMW Germany, Ragginger is a Porsche Junior Team racer who competed in Supercup in 2007. The young German will be making his Rolex 24 debut.

"Martin was blindingly fast in the Supercup series," said Buckler. "He's a young gun with a lot of enthusiasm and endless amounts of speed, and I really look forward to working with him and helping to steer him toward the top of the podium. This is a great car and a terrific group of drivers. Watch these guys."

The No. 65 car will be driven by Russ Oasis, Tom Atherton, Jim Stout, Jason Daskalos and Trans-Am and SPEED World Challenge ace Tommy Archer. Michael Gomez, Michael Auriemma and John Mayes make up the driving strength in No. 68 while Duncan Ende, Ron Yarab, Pierre Bourque and Hima Maher will pilot the No. 63 entry.

All seven Porsches are busy being prepared for next week's official Daytona Test, scheduled for January 4-6.