Tom Dyer and Andrew Novich to pilot No. 196 RSR Honda in SCC championship

Former competitors join as teammates as they contest the RSR Honda in the Continental Tire Sports Car Challenge.

ORLANDO, Fla.—RSR Motorsports announced today that Tom Dyer will return to the team in 2013, while Andrew Novich will make his RSR debut this season. The pair will co-drive the No. 196 Cruise America / Thor Motor Coach Honda Civic Si in GRAND-AM Continental Tire Sports Car Challenge. 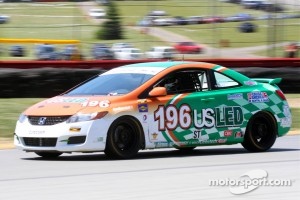 Both Dyer and Novich are veterans of the series. Last year, Dyer earned a best finish of 2nd at Watkins Glen International Speedway, ending the season with 8th in the Street Tuner driver championship.

Now, Dyer hopes to improve on that strong beginning. “I’d like to be in contention for the championship at the end of the year and win some races,” he says. “Throughout the course of the season, you have to be consistent and be a perennial podium threat. The Honda is a good consistent car no matter where you go. It’s clearly got enough competitiveness to win races and can be in it for the long haul, doing well at every track.”

Returning to RSR Motorsports was an easy choice for Dyer, who says, “The team is put together so well and has such great chemistry, and they do so well both on and off the track. I’m really happy to be under the RSR tent for 2013 and thankful to be teamed up with Andrew. I’m looking forward to the experience.”

Novich made his GRAND-AM debut in 2011. Last year, he earned his first series podium with a third at Mid-Ohio. He drove his Honda to four more top-ten finishes to take 9th in the driver championship.

After tasting success in a Honda, Novich is looking forward to being an integral part of RSR. “When Randy (Smalley) is building a program, he doesn’t do it halfway. He showed with the MINIs that he can build a very competitive program, and I wanted to be a part of the program with the Hondas,” Novich says.

Novich lives in Novato, California, so he and Dyer were often at the same racing events even prior to their GRAND-AM careers. “He’s always been quick and I have the utmost confidence about driving with him,” Novich says, adding that he’s also looking forward to his new RSR teammates. “Owen (Trinkler) and Corey (Fergus) will be good competition for us: it’s great to have teammates who can help push each other. It will also help the team get the most possible out of the Hondas.”

Dyer, Novich, and the rest of RSR Motorsports will be getting the most out of the Hondas when the season opens on January 25 at Daytona International Speedway.